Announcement: Airgun Arena is holding a shooting contest. There are rifle and pistol categories. Rifle categories are: spring, sporter (PCP/CO2) and target. Pistols categories are: sporter, custom and target. The contest started on April 15 and ends on May 15, 2010. Pyramyd Air is supplying prizes, so git yer gun ‘n’ git shootin’! 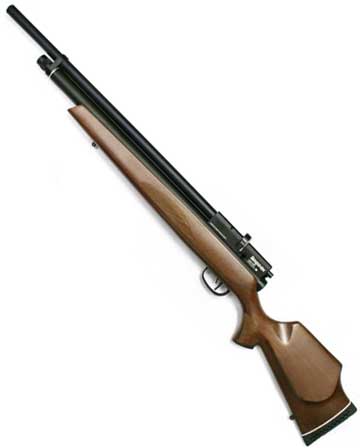 The Marauder now comes in .25 caliber.

Yes, today we’ll begin our look at the new Benjamin Marauder .25 caliber rifle. This report will dovetail with the new .25 caliber Benjamin pellet, of course.

The first thing I note is that the price of the .25 is $30 greater than for either the .177 or .22 Marauders (at this time). Even with that, it’s still under $500, which has to be the biggest news! So, it’s now possible to buy a .25 caliber PCP for a very good price. Of course, the Korean sporters have hovered near this price point for many years, but the Marauder is made in the USA. ‘Nuff said?

The question on my mind was one of size. Would the .25 need to be larger than the smaller calibers? Would the receiver need to wider or possibly longer? And what about the diameter of the barrel shroud?

Fortunately, I tested the smallest of all, the .177 Marauder, when it first came out. I’ve looked carefully at both rifles and can tell you that there are no intentional dimensional differences.

One thing that strikes me but may not affect anyone else is that the entire Marauder line of stocks has changed. Crosman now says that all Marauders are made in the USA with some foreign parts. I have to imagine that the stock is one of those parts. Where the stock on my original .177 was more rounded and had overly generous checkering, the new .25 has a square, high profile to the forearm and the checkered portions on both the forearm and pistol grip have shrunk significantly. The finish of the current series of stocks is a matte or hunter-type finish that many of you have said you like. Lastly, the ventilated buttpad has also shrunk.

As far as the metal parts go, I think the outside dimensions are pretty close between the largest and smallest caliber rifles. I was especially concerned with the width of the shroud, and I can tell you that if it is any wider than the shroud on my .177, that width is not intentional.

Fill pressure
When I first tested the .177 cal. rifle, I made a big deal about the adjustability of the valve and hammer stroke/impact strength. These features allow you to tune the rifle to different pressures with different output powers. The current Marauder has these things, but the recommended fill pressure is 3,000 psi, and I think the amount of experimentation with all the variables can be overlooked. It’s there if you want to use it, but nobody’s going to make you. Yes, the Marauder is still a Dual Fuel airgun, allowing the use of CO2 as well as high-pressure air. It’s my opinion, however, that Dual Fuel is more appropriate to the Benjamin Discovery rifles and less so to a .25 cal. PCP like the Marauder. You don’t buy a Corvette and then convert it run on corn cobs. 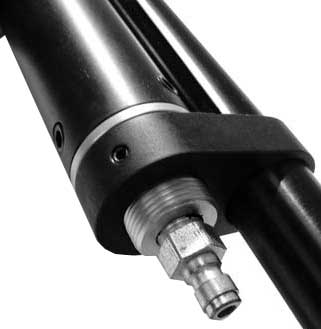 Like all Benjamin PCPs, the Marauder’s coupling on the rifle is a male Foster.

Fill device
With all the new shooters coming into the world of PCPs, fill devices are more important than ever. Followers of the Benjamin PCP line will know what I’m about to say. But if you’re brand new and looking around at all possible guns, this is an important fact: All Benjamin PCPs fill with a female Foster coupling. It doesn’t matter if you’re filling from CO2 or air, the coupling on the rifle is a male Foster, so you have to have a female Foster connector to link up. If you buy Benjamin-branded fill devices, the right connectors will be there. If you’re putting together a Chinese meal for your airgun, know that you’ll need a female Foster quick-disconnect to couple whatever gas you intend to put in the rifle.

Trigger
The new Marauder’s trigger continues with the adjustable features found on the original Marauder. However, I must say that I believe Crosman engineers have found ways of smoothing up this light an action. Speaking of actions, I found that the hammer cocked a lot smoother and easier on the new .25 caliber test gun.

The clip
Besides that, there’s just one more significant difference between the .25 cal. Marauder and all other calibers: the clip. Where .177 and .22 cal. rifles both support a 10-shot circular clip, the .25 is an 8-shot. That’s still enough ammo to down a murder of crows. Like the other two smaller calibers, the .25 clip inserts from the righthand side of the rifle, leaving clearance on the left for a large adjustable parallax wheel on your scope.

Besides all this, the new Marauder in .25 cal. will produce over 45 ft-lbs. of energy. We’ll find out exactly how much we can get when we take the rifle into accuracy testing. For now, let me say that I think we have another winner on our hands.