Update on Tom/B.B.: Improvements continue! One of the doctors mentioned that they’re starting to look down the road to see when he can be discharged. Nothing definite yet, but things look promising!

Today’s guest blog is a continuation of last Thursday’s, comparing a vintage Red Ryder with a new one.

Both guns have identical view ports, through which you can see that a BB has been fed correctly. Externally, of course, I cannot detect any difference in the feeding and loading mechanisms. The old one is a little less particular about correct orientation during cocking. The 1938B loads reliably but is more particular about the orientation of the gun than the older 1938. 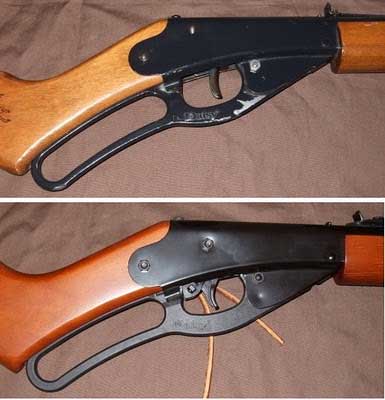 The new cocking lever (bottom) is plastic, whereas the old one is cast aluminum.

The 1938 cocking lever makes one solid “clack” at the end of its arc, whereas the 1938B makes seven clicks during its travel due to an internal ratcheting mechanism. This is a safety feature to prevent mashing fingers if one pulls the trigger with the cocking lever extended. I can attest that this was a fairly uncomfortable occurrence on the old 1938, but a pretty common dare as well! Despite the increased safety, the old 1938 feels a bit more solid when cocking, since the 1938B’s plastic lever is much less substantial and vibrates a little with the ratcheting.

Note that my 1938 has had a couple of nuts missing from the receiver since the 1980s, and the cocking lever pivot bolt and nut are a juvenile replacement; the bolt is undersized, and I don’t believe there was a nut originally, simply tapped metal. I replaced the original with an undersized bolt, necessitating the nut. The missing nuts on the receiver were seemingly for appearance, as the folded metal receiver is tapped for the screws also.

The 1938B has a plastic trigger and safety, whereas the 1938 has only a folded metal trigger (with a notably lighter pull). The 1938 has no safety! The 1938B’s cross-bolt trigger safety is part of a plastic unit that seems to be integrated with the trigger. Although wear on the older gun is a consideration, it also seems likely that the trigger-pull on the newer ones was increased on purpose, in addition to adding the safety.

Another significant functional difference is in the loading ports. 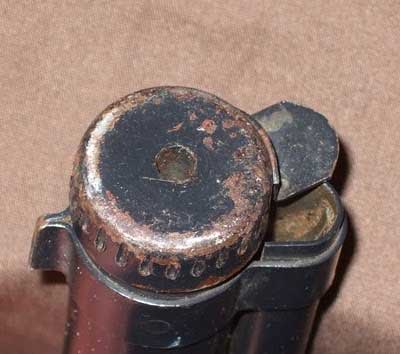 The 1938 loads by turning the metal cap that forms the muzzle (it looks like a bottle cap), which moves the tab over the feeding tube. Loading is easy…by cupping the hand into a funnel over the opening, one can pour 650 BB’s into the reservoir. 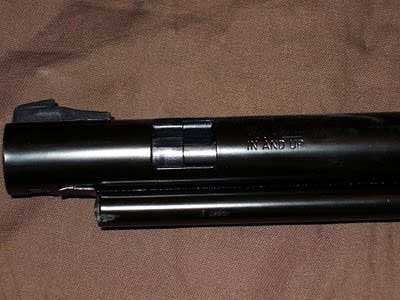 The new 1938B also holds 650 BBs, but getting them in can be tricky, as the loading port has been moved to the side of the barrel and taken the form of a sliding door. The feeding tube is plugged and shortened. I assume this change was made to prevent the user from placing his hand over the muzzle during loading.

Intangibles
Functionally, there’s a slight edge to the older gun, with easy loading, no safety and a very light trigger, as well as more solid and easily adjusted (although cruder looking) sights. I also suspect that nostalgia plays no small part in my preference. The new gun feels smaller and lighter, although the lengths are obviously identical and the weights are close. The clicking cocking mechanism and the plastic cocking lever are definitely glaring differences. Whereas the older gun still feels solid (albeit a little worn in) after all this time and perhaps tens of thousands of shots, the newer gun seems a bit more fragile. Since most of the changes seem to be a likely necessary response on Daisy’s part to the increase in litigation and costs of manufacture over the last three decades, it’s hard to fault them excessively for the changes, especially as the price has seemingly changed little (not even counting inflation) over the last three decades.

Out of the box, the new gun hit a cross-mark dead center at 5 yards on the first shot, so it shoots enough like the old one to be in the same league. Of course, that first shot was luck! It seems to group (using the term loosely) almost identically to the old one. My accuracy estimate is based on shooting offhand…I didn’t use a bench. In my experience, groups of around 2 inches at a maximum of 25 feet are what should be expected, although sometimes you may be able to do slightly better. Back in the day, we would regularly shoot bottle caps at about 25 feet, but we counted only the hits!

Range also is not very far, which is good in terms of safety and convenience. My brothers and I would play a “rifleman” game, where we would shoot a 4 ft x 2 ft piece of corrugated steel located about 150 feet away (just a guess as the “range/playing field” is now gone). This game did not require a precise sight picture (2 feet of windage was usually adequate), but it did require knowing which part of the writing on the back of the barrel to place in the notch of the rear sight. Again, we would regularly hit the long-range target, but there were, I’m sure, many misses. To my knowledge, none of us were ever injured by ricochets in that scenario, nor was the metal ever dented by the BBs, although it had many larger dents from being used as a backstop for baseball.

Given the age discrepancy, it’s hard to judge the differences in power: the newer gun definitely seems to hit a little harder, but age is certainly the biggest factor. I don’t think either one would/will ever get above 300 fps, and the rated 280 fps seems just about right, unlike the one from the 1940s that BB tested, which was a little more powerful.

Conclusion
Despite differences between the 1938 and 1938B, the current 1938B Red Ryder is still a gun that can be a lot of fun in the right application and, rather mysteriously given its roots in an otherwise forgotten cartoon cowboy, still appeals to its target market (and their fathers) many decades later.