Well, now that I’ve shot the HK MP5 K-PDW, I have a greater appreciation of what it is and how it functions. The stock removal required to replace the CO2 cartridge is troublesome but not time-consuming. However, while I was shooting, the CO2 started to leak, causing me to have to tighten up the screw that puts tension on the CO2 cartridge. This is the first time I’ve ever had to do this in tens of thousands of CO2 cartridges, and it was unexpected, except that I read about it in the customer reviews when they rated the gun. So, I suspect this behavior is common to this gun.

The stock pins are now worn in enough to easily press out with my fingers. They’re still difficult to align when putting the stock back on the gun, but a plastic hammer will tap them into place quite readily.

Don’t do this!
Now let me tell you a weakness of this CO2 cartridge installation system. When I loaded a cartridge I forgot to loosen the screw all the way before pushing the pins back in the stock, and I pierced the cartridge as I was installing the pins. It is written clearly in the owner’s manual to not do this, but I thought I knew what I was doing. So, I exhausted an entire cartridge with no effect. Remember to back off the CO2 piercing screw each time you remove a CO2 cartridge, and you won’t have this problem. 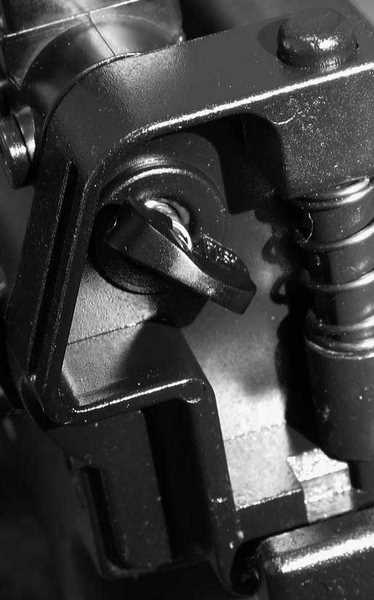 This screw pushes the CO2 cartridge into the piercing pin. Don’t forget to unscrew it all the way before you put the stock back and push the pins in place, or it’ll pierce the fresh cartridge before you’re ready.

Number of shots per cartridge
I got about two complete magazines per CO2 cartridge, but the last shots were not in the same power band as those in the first magazine. They were still in the 300 f.p.s. range and above, though, which makes them credible shots on a close-range course. The real drop-off doesn’t occur until a third magazine is attempted, so don’t try it.

Loading
I found loading was easy and straightforward. The follower release is located on the bottom of the magazine, and until I found it I couldn’t get the follower to move. But once found, the button works fine. So, familiarization with the gun is important. However, loading takes long enough that I can see why owners want to buy extra magazines for their guns. It would be so simple to pop out a spent mag and replace it with a full one. And since you get two mags worth of shots per cartridge, it seems like two mags are the ideal number to have.

So the Daisy spread was tighter, but Crosman BBs went slightly faster. What will that do to their respective accuracy? We won’t know until we test them both, of course, but I would expect the BBs with the tighter spread to group closer together. However, we’re talking only a few fps difference.

Looking at the advertised velocity, I see that the results show a much greater potential than they advertised. I’m surprised to have gotten as many shots as I did at this elevated velocity, except that the longer barrel on this gun may have improved the gas management.

Magazine lockout
I discovered that at the end of the BBs in the magazine, the trigger locks up and will not function. It isn’t like the safety has been applied, either. When the safety goes on under normal operation, the trigger loses all contact with the firing mechanism and simply moves back and forth under the force of the trigger return spring. But, when the magazine is empty, the trigger is blocked from moving at all, whether the safety is off or on. It’s a nice feature for a fast-firing semiauto because you won’t waste any ammo.

Blowback
I think you can forget about the blowback feature. It’s there, but there’s not enough reciprocating mass to feel the impulse. The gun simply pulses when it’s fired. I even turned it sideways so I could watch the ejection port cover move open when I shot. The action underneath this cover is silver, so you notice it in contrast to the black plastic of the cover itself. I could see it move, but was completely unable to feel any blowback action in the gun. I guess the good news is that a lot of gas isn’t wasted by this miniscule movement.

View…so far
Well, I like the light weight of this gun compared to the firearm. I don’t care for the non-HK rear sight, which puts a notch too close to the sighting eye. The regular HK rear aperture would have been the best way to go.

The power was surprising, especially in light of what’s advertised. You’ll want to be extra careful with this BB gun, as it has enough velocity to do damage at long ranges. And, of course, it needs to be said that you must watch out for ricochets, because this gun has the power to send them back at very high velocity.

The method of CO2 cartridge installation leaves me cold. It works and it isn’t hard to do, but it’s very clumsy. I would much prefer to just drop a cartridge into a hole and screw the cap tight than to remove the buttstock and have to assemble it every time a cartridge needs changing.