Announcement: Pyramyd Air has just introduced the Big Shot of the Week on their facebook page. The rules are pretty simple (post a picture of yourself with an airgun or airsoft gun), and you’ll have a chance to win a $50 Pyramyd Air gift card.

Don’t need no stinking manuals!
I began the test poorly, by assuming that I knew how the gun operates. Of course, I didn’t read the manual. And trouble came with the first clip. One good shot was all I got, followed by the remainder of the clip needing a trigger-pull in the neighborhood of 25-30 pounds. I opened the slide to see if something was jammed and there it was. One pellet had backed out of the clip and was now deformed from being dragged through the mechanism against its will. So, I loaded a second clip and started over.

Again the gun tied up after the first shot, so I went to Edith and complained. She told me she had read about the Walther Lever Action rifle when she put the description on the website and that the pellet clips were supposed to be loaded using a special tool. Well, I had no special tool, since the pistol didn’t come with one, but a few days later the Walther Lever Action rifle arrived and it did have a pellet-seating tool.

It works!
The special tool works as advertised — big surprise. All it is is a plastic pusher that forces each pellet into the clip deep enough that the ridges on the sides of each chamber bite into the thin lead skirts. That is enough to hold the pellets in place until, they’re fired. 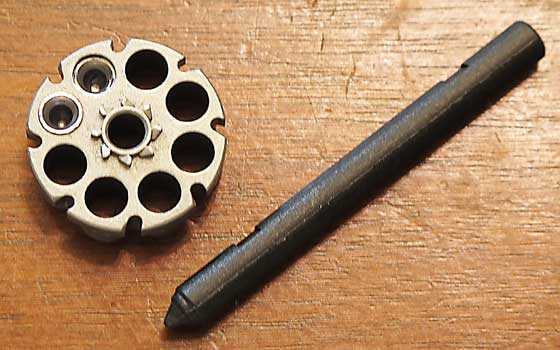 The seater is just a piece of formed plastic. Notice that one pellet is seated deep while the other one is flush with the end of the clip. The flush one will probably back out and tie up the gun.

The manual also advises that the BBs have to be loaded into their black plastic clip from the front end of the clip — which is the side without the ratchet.

Gas use — I learned something important!
Let’s start the test. First, I seated 8 RWS Hobby pellets in the clip and chronographed them. They averaged 320 f.p.s. with a velocity spread from 301 to 338 f.p.s. But I also noticed two very important things when shooting these pellets. First, every velocity was lower than the one before it, even though I allowed the gun 10-20 seconds between shots to warm up. With CO2, if the gun gets too cold from shooting too fast, the velocity will drop off, but allowing 10-20 seconds between shot is more than enough recovery time, especially since I was shooting in a room at 70 degrees F (21.1 degrees C).

The second thing I noticed was that, if I allowed a full minute between shots, the velocity would be back up where it was on the first shot. Let’s tuck away that information for a moment and move on to the next pellet — but we’ll come back to it.

The next pellet tested was the Beretta Target pellet that Pyramyd Air no longer carries. It is a 7.9-grain wadcutter made from pure lead. It shouldn’t be as fast as the 7-grain Hobby, but it was. These pellets averaged 318 f.p.s. with a spread from 309 to 326 f.p.s. Again, each shot was slower than the one before, unless the wait time was a minute or more.

That made me think of a day on the set of American Airgunner when we had a certain pistol that shot slower with each shot, but would restore full power after a minute or more in-between. The problem there and probably here as well was a cartridge that hadn’t been pierced as deeply as it should be. So, I backed off the piercing screw (used to tighten the cartridge against the piercing pin) about one-eighth of a turn until gas began to escape, then I tightened just a little to stop it. Now there was more room for the gas to flow if I was right about what was happening.

The lesson here is that CO2 is a very large molecule that needs lots of room to flow. The next time you pierce a cartridge, try to back off the screw a little, if that’s possible.

BBs are next
The P99 Q is also a BB pistol, so they got tested next. First up were some Crosman Copperhead BBs that averaged 330 f.p.s. The spread went from 319 to 344, so no advantage to the lighter weight of the BBs. The gas blowby in the bore must be offsetting any small gain.

I also tried the RWS BBs . They averaged 328 f.p.s. with a spread from 281 to 339. I cannot explain the lone reading of 281 except it was there. All these BBs fit the clip tighter than the Copperheads.

So far, this little pistol is doing fine. Just as long as the pellet seater is used and you load the BBs from the front, everything functions well. The trigger is heavy, but I should be able to get good accuracy if the pistol is capable of it.