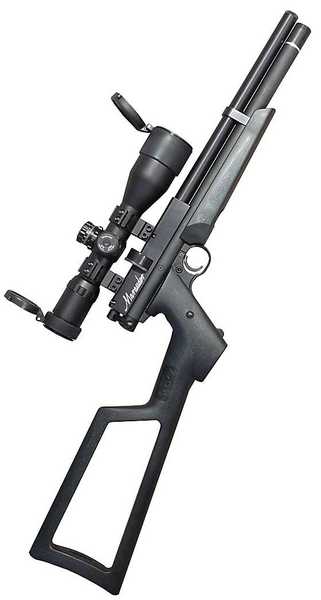 I even did an extra accuracy test because for the first one I mounted an old Leapers 6×32 scope that didn’t seem to give the pistol a chance to perform up to its capability. When I substituted a CenterPoint 3-12x44AO compact scope in the last test, the pistol showed what it can do.

The Marauder pistol is a .22 caliber with all the accuracy you could hope for. The power is great for this size airgun, and I strongly recommend attaching the standard shoulder stock extension that comes with the gun.

Beretta 92FS
The next great product of 2011 was the Beretta model 92FS air pistol with wood grips. I completed the test on this one in March. I was so impressed that I thought for a long time that Edith and I needed to get the firearm to go with it. In the end, we returned it because you just can’t keep them all; but while I had it, I thought it was a wonderful air pistol.

What’s so good about this scope? The clarity. It’s even clearer than my Unertl 6x that used to be a standard for target shooters. At 14x, it’s clearer than other scopes are at 32x. You have to see it to understand how that could be possible, but it is.

It’s very costly, though with the clarity it surpasses others of greater price. It’s the best I’ve ever seen.

Crosman Silhouette pistol
The Crosman Silhouette PCP air pistol is another pistol that made my list. I’d tested it the year before, but this one had some improvements, the most notable of which was the trigger.

The power is great, in the high 400s with medium-weight .177 pellets, but the number of shots on a fill reached 75, which is even more phenomenal. Crosman really did their homework on this pistol — refusing to let it alone after the initial offering. The result is that they launched an even better model in 2011 that will have airgunners talking for a long time.

Looking very Western, the Walther Lever Action rifle was one of the best airguns from 2011.

Walther Lever Action rifle
Walther already had a good lever-action air rifle, but last year they modernized it to accept the 88-gram CO2 cartridges, and the new Walther Lever Action Rifle is even better than before! I liked it so much that I did a special 4-part review on the gun and showed you accuracy you didn’t expect to see from this kind of airgun.

This rifle is pricy, but you get what you pay for. It’s slick, accurate and reliable. If you want a good lever-action pellet rifle it’s the only game in town. (My test featured the nickel version, but Pyramyd Air no longer sells it…but the blued version is still available.) 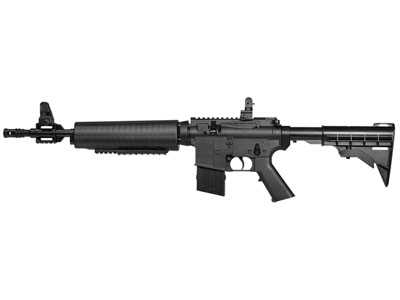 Crosman M4-177 air rifle
I would be remiss if I didn’t rave about the new Crosman M4-177 multi-pump air rifle. I liked mine so much I bought it! Does that tell you anything?

The gun is realistic, accurate and well-made. I bought one of the early guns that were mismarked, but Crosman begins shipping guns with the correct marking this month. I don’t know if Pyramyd Air has any of the mismarked ones left. However, don’t let that stop you — this is an airgun we can all enjoy.

Dan Wesson BB revolver
We ended the year on a high note with the Dan Wesson BB revolver. When I reported on this novel new revolver, I said I was impressed by the realism they packed into the design. Twenty years ago, you just couldn’t get this level of realism in an airgun.

The one thing I failed to note in my report is the quirky way the safety works. Of course, a safety on a revolver is about as common as a unicorn horn; but if you have one, it ought to work right. This one doesn’t. You can put it on when the hammer is down and the action will be locked; but if the hammer is cocked, the safety does nothing at all. That’s dangerous, because there are new shooters who haven’t been properly trained and will test every safety in an unsafe way. This one will fire if they do.

Still, the gun is powerful, gets lots of shots and is quite accurate for a BB pistol. It’s also all metal. I don’t know what more you could ask for.

Summary
I reviewed many other airguns in 2011, including a host of vintage models that I won’t report in this list. These are the ones that stood out and caught my interest. You may have others, and now it’s your turn to comment.