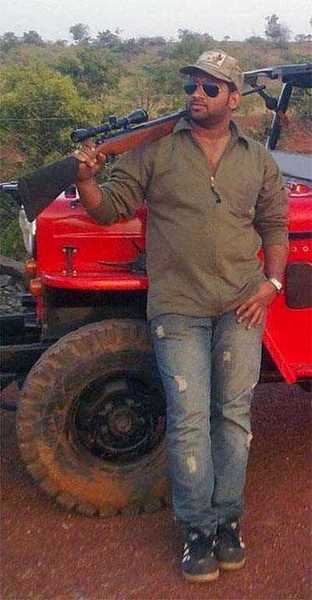 Adil Maroof is this week’s BSOTW.

Today’s report isn’t about airguns, per se. It’s about circumstances and the things that surround the guns that often determine their value down the road. This subject is one I’ve been thinking about for more than 40 years, and I have had some pretty strong arguments with collectors, so let’s see what you think.

Commemoratives, anyone?
Back in the early 1970s, I had a chance to buy two Winchester commemorative rifles. They were both model 94 Centennial 66 commemoratives. I bought them to hopefully make a little money; but when I put them out at gun shows, I discovered they were not at all desirable. Too many of the same gun had been made, and they were very easy to acquire. Nobody wanted them. Collectors didn’t want them because they had no real collector value — and never would — because of how many were sold. And shooters didn’t want them because, if they ever fired a shot through them, they would lose all their (non-existent) value.

How they were sold was what caused the problem. These rifles were made in huge numbers and sold to virtually anyone who wanted one. There was no cachet — no “specialness” to the model that made them desirable. Because they were called commemoratives, the moment one was fired, it lost any value it might every get. The only way to make anything on one of these rifles was to buy it and never open the box. Then, in 40-50 years, it might bring a small premium, though it’s doubtful that even that would be enough to offset inflation of the same money held for the same period of time.

Are all commemoratives in the same boat? Not at all. Some were issued in very limited quantities, and that fact is known by everyone who collects. Those guns do command a premium. But you have to know which ones are valuable going in…or you have to be very lucky.

Let me contrast that high-volume commemorative with the Pederson device of World War I. Military planners wanted a way to turn the U.S. service rifle into a semiautomatic rifle that put out a high volume of fire in a short time. The thinking was that all the soldiers would emerge from the trenches with their rifles at their hips, firing bullets as fast as their fingers could work the triggers. The enemy would be overwhelmed with the high volume of incoming fire and keep their heads down, allowing our soldiers to gain ground on the battlefield.

Irwin Pederson invented a .30-caliber semiautomatic pistol insert for the Springfield rifle that allowed soldiers to convert the rifle to a semiautomatic in seconds. It fired .30-caliber pistol bullets that traveled at a very high speed, and it carried 40 rounds in a stick magazine. It was a wonderful idea except — (A) Nobody asked the soldiers what they thought, and — (B) It came too late in the war to be used. The government shrouded the project in secrecy; and at the end of the war, they ordered all Pederson devices destroyed. There are only a few still in existence. If you own one, you can pretty well name your price.

The lesson is that commemoratives that were made to be commemoratives may not be such a good idea, but accidents like the Pederson device are sure things.

Getting lucky
Sometimes, though, things run counter to the norm. I once bought a Daisy 1894 Texas Rangers commemorative BB gun in the original box for $80. The box was in poor condition, but all the original literature came with it and the gun inside seemed to be unfired. I certainly never cocked it! The lucky part of the story is that of all Daisy 1894 BB guns, this one is the most desirable. I sold the gun for $500 two months after buying it, and the man who bought it still got a good deal. But I could just as easily have bought a different Daisy 1894 commemorative that might not have made any money at all. In my case, it was a pure gamble; but if I’d checked in the Blue Book of Airguns before buying, it would have been a shrewd purchase.

Let me give you a case where the line is not so clear. The Daisy commemorative No. 25 pump gun was issued in 1986. It came in a nice box, and the gun was made intentionally to look like the earlier No. 25 pump guns — the ones made before 1930. Daisy made a bucketload of them; but because the No. 25 is regarded so highly, they have increased in value over time.

The Daisy Christmas Story Red Ryder is another example of a special commemorative gun that defied logic and is now extremely collectible. The BB gun that never existed (author Jean Shepard mistakenly wrote that the Daisy Red Ryder had a compass in the stock and a sundial), became the most famous Daisy never made. They’ve even reissued another one in 2003 to mark the 20th anniversary of the first one. All signs point to that gun being a good one, too.

Value-makers
When Al Biesen made rifles, they appreciated in value with each passing year. But that doesn’t always hold true. Al Biesen is renowned and had a 50-year history of making fine guns.

When Snuffy Smith, airgun maker extraordinaire and a legend in his own mind, makes a “special” model, it will probably not gain value as time passes. Why? Because nobody ever heard of him, outside his own world of 200 internet admirers. If you back up a few feet, you’ll see that every gun Snuffy makes is different because he’s still learning his craft as he goes. He’s not an Al Biesen, no matter what he thinks. Buying a gun from Snuffy is a financial risk.

Tried-and-true
There’s an old saying in the federal government: “Nobody ever got fired for recommending IBM.” The gist of the saying is that things that everyone knows and appreciates are always good, no matter what your personal tastes might be.

That said, an HW55 will always be a gun to invest in, and a 55 Tyrolean will be the absolute top in the category. Of course, condition means a lot, and I’ll address that in a moment, but you still must have the right model to begin with.

You and I may disagree on the styles we like, but we both have to acknowledge that HW55s and TX200s hold their value. HW55s are now gaining in value because they aren’t made anymore. If TX200s stop, there will be a rush on them, as well.

But a gun that is standard cannot be transformed into a collectible by a new finish and the hopes of a retailer. There are plenty of commemorative and special-issue airguns whose values have not increased, in spite of all the good things said about them. For example, just because a Beeman R1 is nickel-plated, people won’t necessarily assign a greater value to it.

Finish and condition
Condition is everything! When I started out collecting airguns, I thought that it was good enough to just get a certain model, if it was one that everyone wanted. If I got a Sheridan Supergrade, I was happy until a real collector pointed out that the sight wasn’t right and the gun had been refinished. By the time they were done picking apart my gun, I knew I had just an expensive shooter and nothing more. And a sow’s ear today will still be a sow’s ear 10 years from now.

While the right model of gun is important, the condition of the gun is equally important. I don’t want to be the guy who paid $3,000 for a first model wire stock Daisy, only to learn that it has been rebuilt and refinished. Then, my gun is just a placeholder in my collection until I replace it with one that hasn’t been fooled with.

Some people have a hard time understanding how collectors feel about condition, so for those guys I offer this little gem: I once owned the hatchet George Washington used to chop down the cherry tree, only the handle had been replaced three times and the head twice. Think about it.

Sometimes the bargains stare you down!
First example of this is a Shiloh Sharps rifle you bought for $3,200 and wait three years after ordering. Are you aware that you can buy an original Sharps rifle in very nice condition for about the same money? Odd as it sounds, original Sharps rifles often sell for less than the modern replicas. People aren’t aware that they can buy them, or they fear buying an original gun that’s old and has no company backing it up.

Bottom line
The bottom line for buying airguns is the same as it is for buying art. Buy what you like. If you like it, then who cares about the price? However, if you try to artificially build a collection of fine airguns just as an investment, you’re heading for trouble. Because your heart’s not in it, you’ll overlook things a true collector never would. You’ll jump at opportunities to buy guns that are not really bargains if all you’re doing is trying to make money. But if you really like airguns and buy only those that strike your fancy, you should be well protected by your internal compass.

Personally, I would rather have 10 airguns I really enjoy than 100 that are just investments. That way, when the economy slows down, like it has for the past several years, I can always shoot the guns I have and be happy with them. The saddest sight is a collection where everything is in a box and you have to put gloves on to examine it. Airguns are meant to be shot. That’s my opinion, anyway.

50 thoughts on “The way guns are sold determines their collectibility”