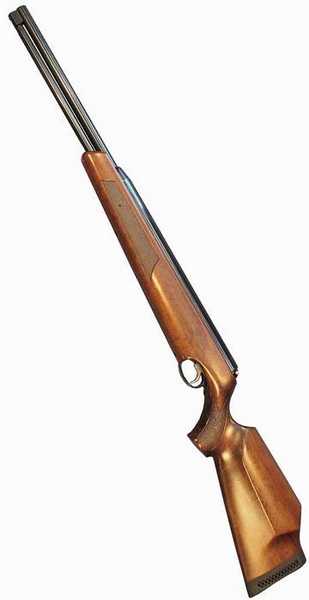 Today we’ll begin looking at the current TX200 Mark III. This will be an unprecedented look at a second rifle — the one that’s being shipped right now. I’m doing this because of many questions readers have asked over the years. Is the TX that’s shipping today the same as my TX that was bought over a decade ago? How does a new rifle perform right out of the box? Has the finish quality dropped off over the years?

That’s the problem I face with my reports. If the gun does well, I’m asked if I think another one will be just as good. And, if it has shortcomings, I’m asked if I think another gun might be better. The TX200 Mark III is too important for this kind of confusion to remain; so just this one time, I’m testing the same, identical model — to see if what I’ve been telling you about the rifle holds true.

Brand new TX200 Mark III. It’s very similar to my TX, but the checkering is different and the line of the forearm is more scalloped.

The rifle
The new rifle looks different because it has fish-scale checkering, rather than the more traditional diamond pattern that’s on my rifle. The borders of the checkered panels are foliate scrolls and oak leaves. And, like the rifles of the past, there are four panels — two on the grip and two more on the forearm. The wood is beech, because that’s what I ordered. Of course, walnut is still available as an option, as are left-hand stocks (but only in the optional walnut models).

I see the forearm is more scalloped than the one on my rifle. It swoops up from the flat in front of the triggerguard instead of lining up straight like mine. That gives the rifle a sveldt look, though the bulk is identical to my rifle.

The checkering on the new rifle is fish-scale — an option that used to cost a lot of money when it was done by hand. The sliding chamber catch is in the center of this picture.

I’m testing serial No. 127507. It’s a .177-caliber model, just like the rifle we’ve been reviewing all along. Like all TX200 Mark IIIs, this rifle has a shrouded barrel with baffles. That’s been on the model since it was introduced over a decade ago. Although the rifle’s report is quieter as a result of the baffles, it doesn’t sound quieter to the shooter because the sound of the powerplant is conducted through the bones on his face that are in contact with the stock.

The TX200 stock is about as ideal as rifle stocks get, especially for those who shoot field target. It was designed at a time when field target was the biggest game in town, and the shape of this stock is perfect for that sport. There is a relatively flat spot just forward of the triggerguard where the rifle rests on your off hand, and the pistol grip is very vertical, giving you excellent control over the trigger. The trigger is based on the famous Rekord trigger that Weihrauch made famous a half-century ago. The TX trigger, however, is more adjustable than the Rekord unit and allows you to have release weights lower than 1 lb. There are more adjustments that I will cover in detail in a future report. 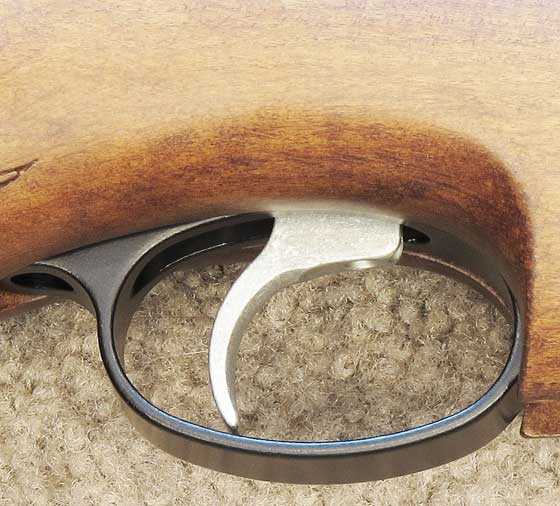 The TX trigger is an improvement on the Rekord by Weihrauch. There are more adjustments.

The wood fit is flawless, as you would expect to find on a rifle in this price range. You expect it, but you don’t always get it. Air Arms has always had flawless wood, and I’m just reporting that the current model has not relaxed the standards one iota!

Let’s talk about the metal. Anyone who buys a TX200 is always surprised when they open the box. The metal finish on the gun is so deep, black and flawless that it takes your breath away. Even if you’ve owned other fine British airguns, every new TX200 is a surprise and a joy when first beheld. Maybe some of our blog readers who have just acquired TXs can comment on that.

This is an underlever rifle. The underlever mechanism is held near the muzzle by a ball bearing detent. It’s smooth, and unobtrusive, but the lever pops out the moment you pinch it with your fingers. I found the test gun made more noise when cocked when it was new than does my personal TX200. Then, I remembered that my TX also made noise when it was new. By “noise” I don’t mean a lot — just a little sound of the piston sliding back as the rifle is cocked. The cocking effort is perhaps 1 or 2 lbs. higher than my rifle, but I think that will change as this rifle breaks in.

I fired a couple shots just to see how the new rifle felt. It feels similar to my TX, but there’s a bit more twang to the firing cycle. I think it’ll also go away after a few thousand shots have been put through the gun. As I recall, I made the same observation about my rifle when I first got it, and it smoothed out relatively fast.

The TX has a sliding compression chamber that has to come back out of the way for the breech to be exposed for loading. It also pushes the piston back so the sear can catch it. For safety, there’s a ratcheting lock that catches and holds the sliding compression chamber even when the rifle is not yet cocked. The lock is located on the right side of the spring tube, just behind the loading port. After you’ve loaded the pellet, you push down on the lock to slide the chamber back to the closed position. The piston remains back until released by the sear. It takes longer to explain than to do; and after you’ve loaded the rifle a few times, it’ll become second nature to you. 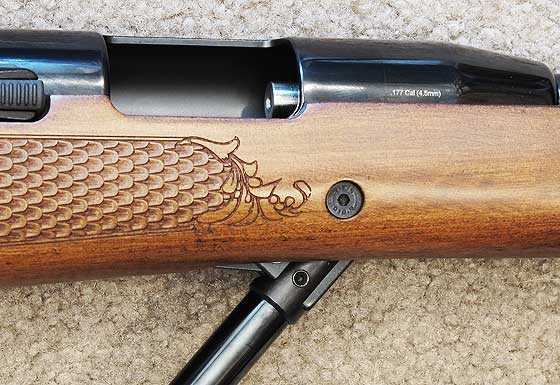 With the underlever pulled down and back, the rifle is cocked. The sliding compression chamber is back out of the way, and the breech is exposed for loading.

When the rifle is cocked, the safety automatically comes on. It’s a button located at the left rear of the spring tube and must be pushed in for the rifle to fire. It’s easy enough to do when the rifle is up on your shoulder, so wait until you’re on target before releasing it.

There are no open sights, as you can clearly see in the first picture. And there’s no easy way to install them on this rifle. Therefore, you need to think about mounting a scope. The rifle is set up well to accept scope rings, and the lack of any sights means nothing gets in the way to dim your view of the target.

You can see the TX200 mounting system and how to install rings in an article I wrote several years ago about installing scope mounts. That article was based on my rifle, but nothing has changed with the latest model. Of course, I’ll be installing a scope on this test rifle when we get to the accuracy report.

Bottom line thus far
So far, I have to say the latest TX200 Mark III is in no important way different than my rifle. It’s still well-made with the best materials, and it’s finished flawlessly. There’s no cause for concern over Air Arms cheapening the design in any way. In fact, I like the shape of the stock and the look of the checkering on this latest rifle better than on my rifle.

Just from what I’ve seen so far, I believe this latest TX will play out just like my rifle did. The one thing that’s significantly different is that, this time, you all get to watch.