Today I want to introduce you to a new BB that’s just come to market — Hornady Black Diamond steel BBs.

Hornady Black Diamond steel BBs
Hornady is an ammunition and bullet maker; so, when they came out with their Black Diamond BB, I had to test it. I already use several of their bullets in my firearms, and I know they’re a premium brand. The Black Diamond is a steel BB, so it will work in guns that use magnets to control the BBs. These days, a lot of them do use magnets.

Hornady says their BBs have an anodized finish, which is something I always equated with aluminum; but since the anodizing process uses electrical charges to move material, I guess it can work with many conductive materials. The BBs are black, like the name implies and Hornady says they’re very smooth and uniform. They also advertise 100 percent visual inspection, which has to mean a camera scan, because BBs are made at rates too fast for human eyes to be of much service.

The BBs come in a feeder bottle. You break off the top of the bottle by twisting a tab with pliers and the bottle mouth is wide open. A cap then fits down to seal the bottle when it’s on the shelf.

The packaging says these BBs are .177 caliber, but that’s incorrect. They would not fit in 95 percent of BB guns if they were that large. Most steel BBs range between 0.171 and 0.173 inches in diameter, and 4.3mm is often given as their true metric size.

Size
I measured 5 Black Diamond BBs and found them to range in size between 0.170 and 0.171 inches in diameter. That puts this BB on the small side, though it’s very uniform, as advertised. 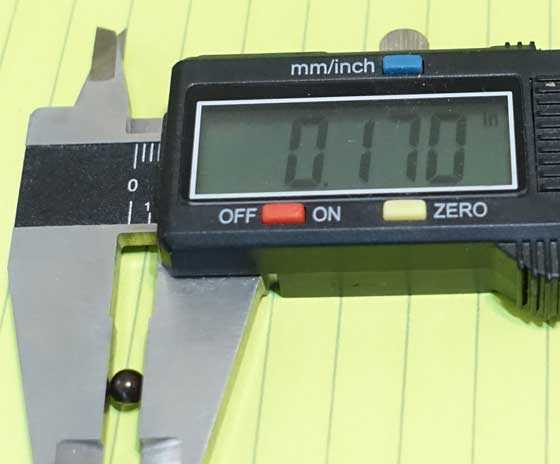 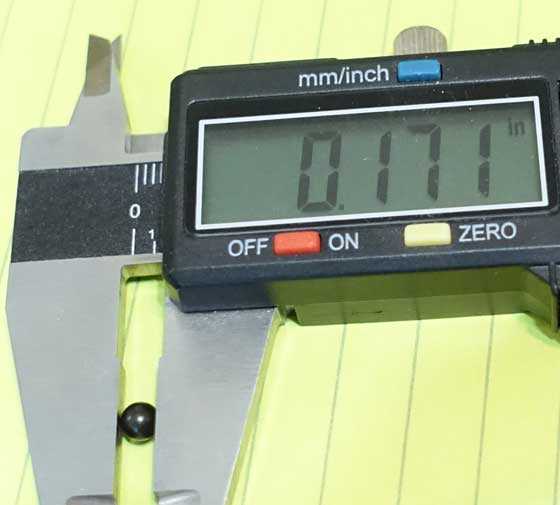 The largest Black Diamonds measured were 0.171 inches in diameter. Two of five measured this size.

Oddly, though it is small, the largest Black Diamond weighs 5.2 grains. That’s one-tenth grain heavier than most popular BBs. Alloy differences could account for that. 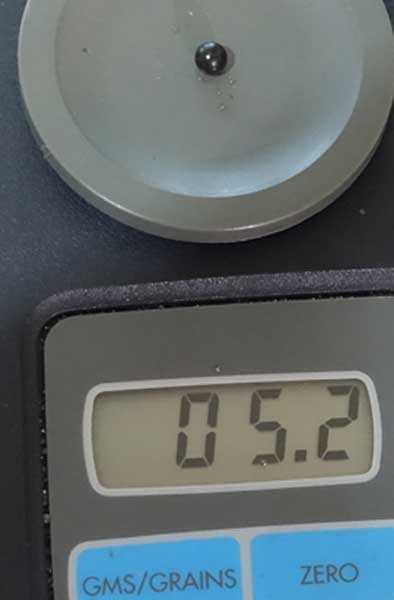 Both regular BBs held their own with the precision ground shot, which I did not expect. And the Black Diamond BBs seem to fit the 499 about the same as the regular Daisy BBs, despite being a little smaller (the Daisy BBs run 0.171 to 0.173 inches).

Conclusions
These Hornady Black Diamond BBs seem to be made very well; and, in terms of velocity, they do seem to hold their own. Of course, testing with just 2 BB guns is hardly conclusive, so my plan is to include them in many future tests of BB guns.

I will also do a Part 2 to this report, where I shoot all 3 BBs from both guns for accuracy. That’s just to end this report more conclusively, since the Black Diamonds will now be showing up in future BB gun tests.

This BB has a slight premium price, though it’s still quite affordable; so, it remains to be seen if the features it offers — smoother finish and coated with black anodizing — have any discernible benefit. I’m guessing we will find out that these are like pellets — they’ll be the best in some guns and not as good in others. We shall see.