Today I will hopefully answer all your questions about the hand pump test that Dennis Quackenbush and I did many years ago. Remember — we were trying to determine how powerful the old big bore airguns had been. One part of that was knowing what kind of air pressure they used, and that is all we are looking at in this report.

First I want to address a question from reader GunFun1. He asked about the pump’s air inlet valve. I told him there was no inlet valve. There is an air hole located at the top of the pump cylinder, and when the pump piston head rises past it, air is sucked into the cylinder — exactly the same as a conventional piston port 2-stroke engine. No valve is required. When the piston head drops below the air hole, the cylinder is sealed again and the piston is able to compress the air that’s now trapped inside.

But get this — there is also no outlet valve! The single stage hand pumps of antiquity have no valves of any kind. They rely on the firing valve in the airgun’s reservoir to serve as an inlet valve, which also doubles as their outlet valve. Once the air is forced inside the reservoir, that valve traps it.

Since the hand pump is tightly connected to the reservoir, this works well and is very simple to build. The airgun valve in the reservoir is the only valve in the entire system, and the air pressures are so (relatively) low that it doesn’t have to be high-tech. In its day, though, I’m sure it was regarded as magic.

The key to the test

What we are testing is how much pressure a single-stage hand pump can generate. Remember your math teacher I talked about in Part 1? Well, he taught you that the surface area of a cylinder/piston (circle) grows rapidly as the diameter increases.The formula is A(area) = π r². Dennis made 2 pumps to test. One had a piston diameter of 5/8-inch. The other had a piston diameter of 3/4-inch. Dennis weighed about 220 lbs. at the time the test was conducted. Here is the math.

The first chart is a record of Dennis pumping the test reservoir with both hand pumps. Notice that he also filled the reservoir with a modern three-stage Axxor hand pump. 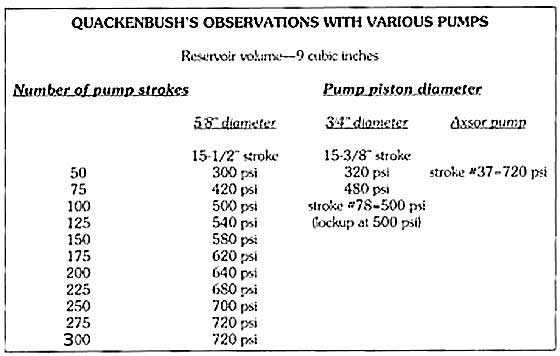 What Dennis’ math shows is how much pressure can be generated by a piston of a given size, when the force (his weight) is constant. 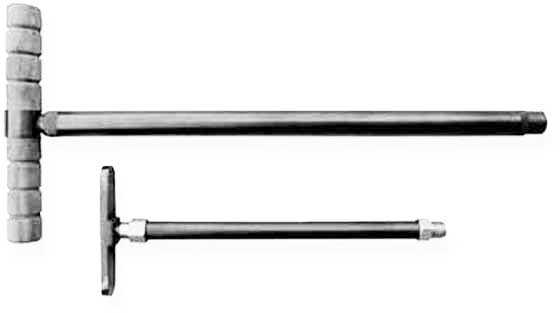 These are two of the hand pumps Dennis Quackenbush built for this test. Both pumps have a synthetic piston seal. They are different sizes to fit cased airguns better. The larger pump has a 3/4-inch diameter piston and is sized for a long air gun or air rifle. The smaller pump has a 5/8-inch piston and is made for an air cane.

Dennis worked out the math for you, and you can see that the results fall in line with the predictions. And bear in mind that the small gauge Dennis used on the reservoir isn’t entirely accurate. So, his findings are ballpark — not exact. I would say we have good correlation with what the math predicts, the weight of the pumper and the end results.

Dennis used synthetic piston seals in both his hand pumps because he always makes his pumps that way. He and I both believed they would seal better than just a close-fitted piston that was oiled. I mentioned that in Part 1. In the interest of knowing the truth, however, Dennis also made another hand pump with a close-fitted 5/8-inch piston that had no seal other than the oil he used with it. To his surprise, that pump achieved almost exactly the same pressure as the pump of the same size with the synthetic piston seal. And the number of pump strokes was about the same.

He also tried “rapping” the 5/8-inch pump. Rapping means jumping on the pump handle to force in more air. He reported that he was able to get the pressure up to 810 psi that way — a 90 psi increase over normal pumping, but the cost was great. Rapping injured his wrists and hands to such an extent that he doesn’t recommend it to anyone.

I tested one, too

Dennis shipped me the 5/8-inch hand pump with the synthetic seal so I could test it. He had not told me any of his results before sending it, to keep the bias under control. I did two things. First I pumped it as high as I could. I got exactly 840 psi. I actually did “rap” in some air at the end. I weighed 240 lbs. at the time I tested the pump. I lost track of the pump strokes because the rapping was so painful. I know the count was something over 200 strokes.

Then I emptied the reservoir and pumped it back up to 500 psi. I left it at that pressure for 4 months, just to see how long the reservoir would hold. Four months later, no pressure had been lost! 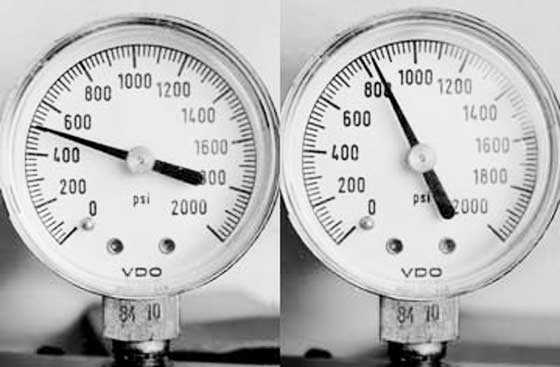 What the data shows is that it’s possible to calculate the maximum pressure for any single-stage air pump by simply dividing the weight of the pump operator by the area of the piston head. There should be some loss of efficiency due to friction in the pump, but this is most probably offset by some imprecision in determining the person’s body weight, the gauge error and also from small differences in effort each time the pump is used (i.e. not every person applies the same force, even when they may weigh the same).

This allows us to test a “theoretical pump” that can generate whatever pressure we desire within the limits of physical laws. For example:

Notice that the length of the piston stroke does not enter into this calculation. That’s because the length of the stroke determines only how much air is being compressed. It doesn’t affect the highest pressure that can be achieved by that piston. A longer stroke will compress a greater volume of air; a small-diameter piston will allow it to build to higher pressure.

Reader Bruce, whose handle is BBB, asked how the airgunners of old were able to fill their guns to the same consistent pressure when they lacked gauges of any kind. Well, Bruce, I bet you have guessed the answer by this time.

Airgunners of old regulated their fill pressure in the same way Harley Davidson cycle owners of the 1930s controlled the torque they put on the various nuts and bolts on their motorcycles — they tightened/pumped as much as they could every time. Does this mean that a heavy owner could compress air more than a light owner? It sure does! Just as a strong motorcycle owner can apply more torque than a weaker one when both use the same wrench.

Consider the level of technology we are discussing. These old big bores are not that sophisticated. “About” and “close enough” are all they need. As long as you try to fill an old big bore with a hand pump of the period you won’t get into too much trouble — [Note: That statement only applies when everything is new. An airgun that is old has to be examined before anything else is done to it, because metal fatigues over time. The same thing is true for the old Harley.]

Now that you understand the physics of hand pumps, it’s time to dream. If a small piston head allows you to compress air to high levels, what would a REALLY SMALL HEAD DO? What if the piston head were only 1/8-inch in diameter? Wow! You could get a lot more pressure with that! Let’s use Quackenbush’s formula and see. That would be the radius of a 0.125-inch circle (0.0625-inches) times pi (3.14159) and square the result. I get 0.03855 square inches as the area of a 1./8-inch circle.

But you would have to pump all day! It would take many thousands of pump strokes to fill a 9 cubic inch reservoir with a 1/8-inch piston. Wait a moment — what about increasing the length of the stroke to get a greater volume of air in each stroke? Brilliant!

And that, dear readers, is how you get a three-stage hand pump. Instead of an 8-foot long pump cylinder, someone (namely Fredrik Axelsson of FX Airguns) folded it into three sections. The first section compresses a lot of air to a relatively low pressure. On the next stroke, the air that was compressed in stage one flows into a second section that takes it from low pressure to a moderately high pressure. On the third stroke the air in the second stage flows into the final stage where the very small piston compresses it the rest of the way — to anywhere from 3,000 all the way up to nearly 4,500 psi! Of course as the air flows from section/stage to section/stage, all stages are at work. So the process of air compression is continuous.

But the formula says we can go up to almost 6500 psi, doesn’t it? Yes, but the formula is looking at a single stage pump — it doesn’t take into account the effort required to compress air for stages one and two. That effort has to be added in, and that is what determines the top pressure that can be achieved by a 3-stage hand pump.

That’s it, kids. That’s how the hand pumps of antiquity work, and now you know where the three-stage hand pump comes from.

Someone jokingly asked if a 4-stage hand pump was possible. Of course it is, but as more stages are added, the pump cylinder gets fatter, and the interior volume may be reduced — in an effort to keep the pump cylinder thin. I think we have it pretty good with what exists today. The only thing I would add is the butterfly pump linkage that reduces the pump effort.

74 thoughts on “Hand pumps for the ancient big bores: Part 2”