Today I begin a report that I started five years ago and never finished. That was before we had the historical section of the blog. I planned to test many things about this line of unique catapult pistols and even bought the rubber bands for the extended test, but somehow it got away from me. Well, now I’m going to try it again.

You may remember several months ago I reviewed the Daisy Targeteer .118-caliber “BB” gun. You may not recall it, but when we got to the accuracy test that pistol failed miserably. These Sharpshooter pistols shoot the same small .118-caliber shot as the Targeteer, but they are powered by rubber bands and are generally much more reliable — at least the older ones are. They are still weak airguns, but I think we can have some fun with them anyhow.

Small things have a way of defining my life, and this is a story about one of them. When I was about 12, I bought a copy of the 1948 Shooter’s Bible in a used bookstore. It was full of guns, and I couldn’t get enough information about them back then. Unfortunately, the wonderful books I would discover on the subject like Sixguns by Keith and Yours Truly, Harvey Donaldson were still decades in my future — in some cases, more than a half century. But, I had that old Shooter’s Bible — a book I still own, by the way. I read it and re-read it, unwittingly but also unerringly committing the pages to memory. 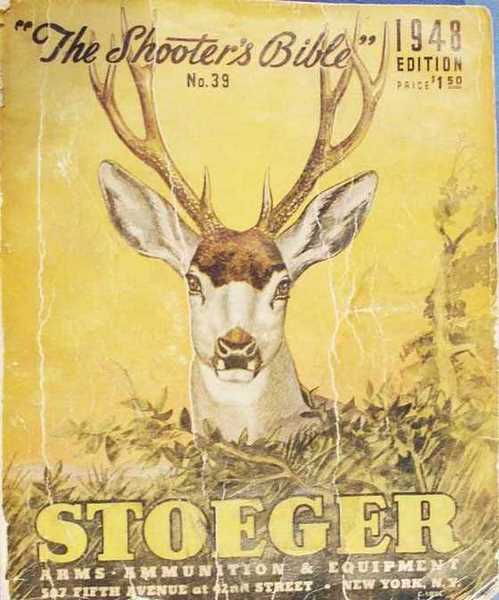 I have owned this Shooter’s Bible catalog for almost 60 years. It defined my beginnings as a shooter. 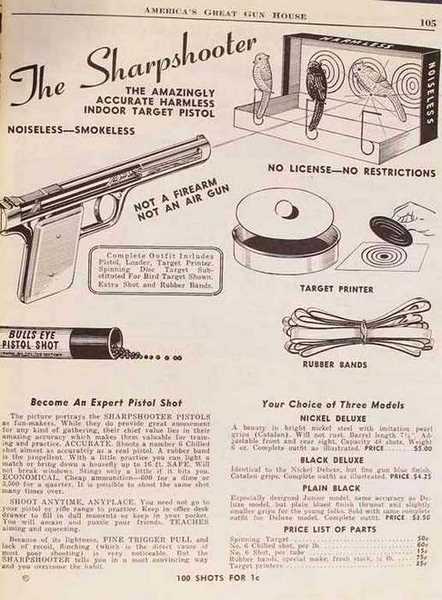 This page in the catalog introduced me to the Sharpshooter pistol. Boy, did I want one of these!

Thirty-plus years would pass before I realized these were not the same pistols that were in that old book…that the company making them had been bought and sold numerous times, and the guns I saw and purchased in the store were the 1965 versions of the gun, albeit made by someone else and to different manufacturing standards. They looked like the Sharpshooters of the 1940s, but they had plastic parts in key places. As a result, they didn’t hold up very long when used. 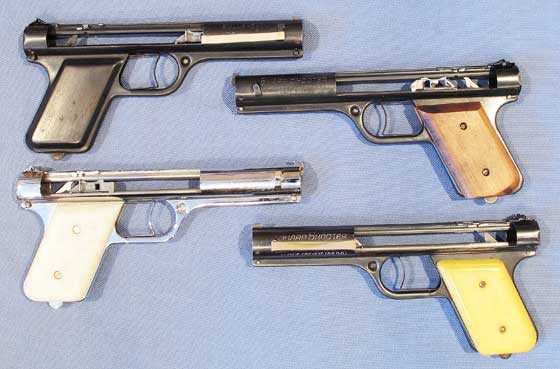 Over the years I have collected several Sharpshooters from different eras. The one at the upper left is one of two I bought in the 1960s. Both it and the gun at the lower right (from the 1940s) have rubber bands installed. Notice their launchers are forward, while the other guns’ launchers are back. 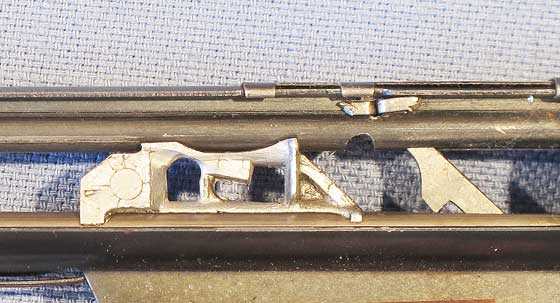 The sliding launcher is what flings the shot from the pistol. The older Sharpshooters have metal launchers that last for decades. This one is about 76 years old and still works fine. That flat metal piece on the left is the sear that also opens the in-line magazine to allow one shot to fall into the launcher. 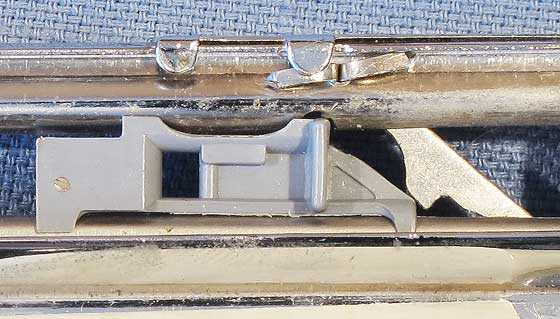 The metal launcher was replaced by a plastic one sometime in the 1950s or ’60s. It cannot take the strain of constant use and will fail with time. I have had two plastic launchers fail. When they fail there are no replacement parts.

When I became a serious airgunner later in life, I rediscovered the original Sharpshooter pistols. These were the real deal with all-metal parts that are still functioning today. What a difference they are from the cheapened guns! Although the two look very similar, the older ones are the Diana 27s of the catapult gun world, while the plastic-parts guns are the Chinese wannabes. 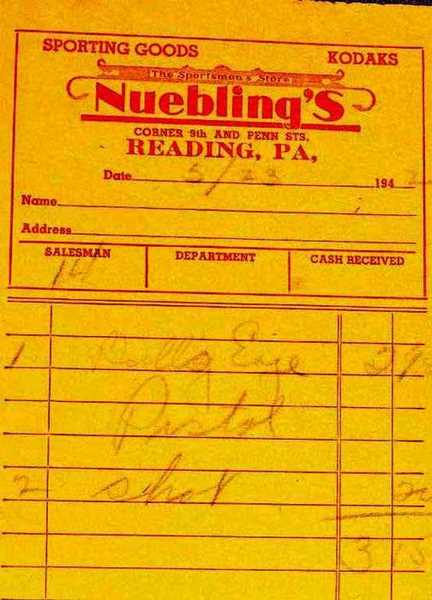 The Sharpshooter shown at the top of this article still has the sales receipt in the box. It was sold as a Bulls Eye pistol on March 23, 1942.

The Sharpshooter pistol is a repeater. The No. 6 shot lead balls lie in a channel on top of the gun. They’re held in place by the front sight, which simply slides out of the channel so the gun can be loaded. A metal trough is provided to funnel the balls into the channel, then the sight is pressed back into place. There’s room for approximately 50 shot in the channel. 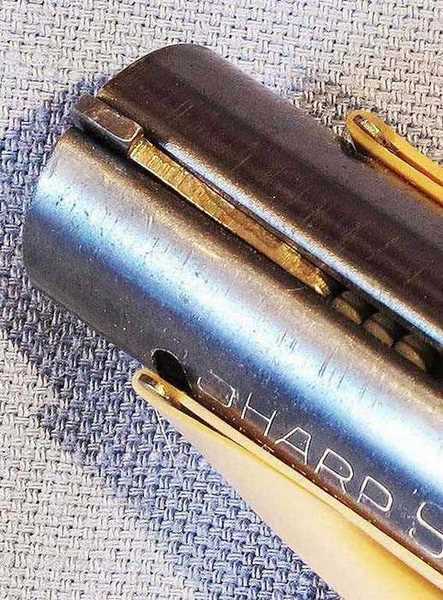 The front sight blade holds the shot inside the channel on top of the gun body. 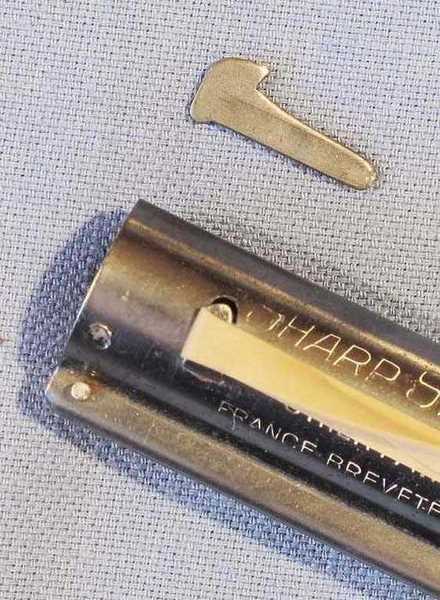 To load the shot channel, the front sight is removed.

The loading trough is attached to the pistol and shot is poured in. It’s a speedloader from the 1930s!

When the launcher is pulled to the rear, stretching its rubber band, it pushes up the sear that moves out of the way to allow one shot to fall from the channel into the launcher seat. Only one piece of shot at a time can be loaded. What the user does is pull the launcher straight back until the sear catches the trigger, cocking the gun. That holds the loaded launcher in place until the pistol is shot.

The front sight can be adjusted up and down by a small amount. That’s the elevation adjustment. The rear sight can be slid from side to side a small amount because it’s held in place by 4 small metal tabs that form a crude dovetail. 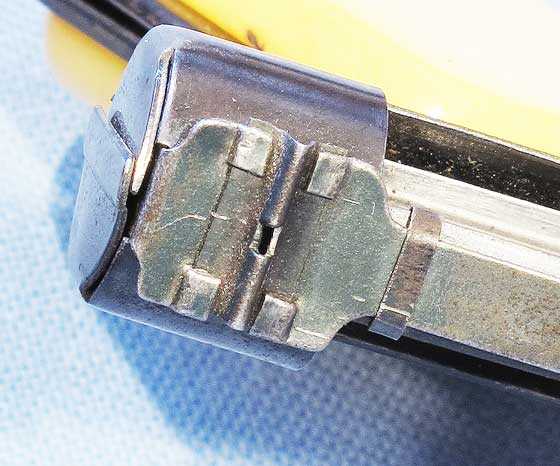 The rear sight is held in by 4 metal tabs. It can be slid from side to side for small windage corrections.

How much value can be put into an inexpensive gun?

I think the old Sharpshooter pistol is the perfect example of putting value into an inexpensive gun. I think it shows why people love designs like the Soviet AKM rifles. Nobody argues that the AKMs are cheap to build — but the thought that went into them before the first piece of metal was cut or bent is where the investment is. That’s what the Sharpshooter pistol shows us — the thought that’s given to a design before it’s executed can be a wonderful thing. 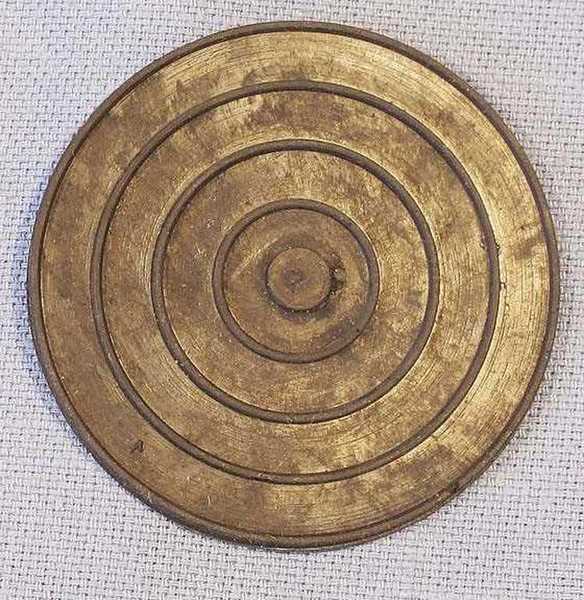 A rubber stamp and stamp pad are provided in the box, so the shooter can stamp out targets! 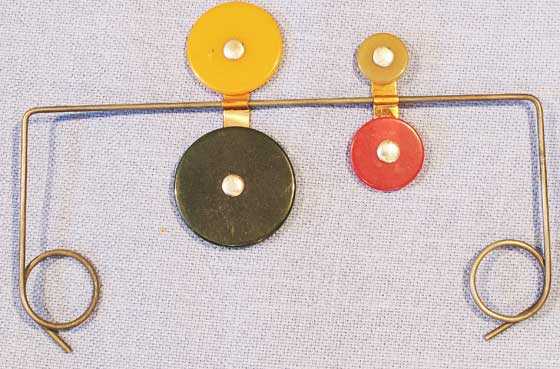 This Sharpshooter came with colorful Bakelite spinners. The wire clamped to the gun box with the box top as the backstop! Some guns had celluloid birds that perched on small wire stands. See them in the 1948 catalog page above.

What is this about?

This report has started like a history lesson about a vintage airgun, but that’s not what it will be. I will test the pistol in similar ways to other vintage guns on which I’ve reported. But that isn’t what got me started thinking about this gun.

I was at the Roanoke airgun show maybe a decade ago, sitting at my table by myself, when my eyes fell on my vintage Sharpshooter pistol — the one pictured above. In a moment of weakness I had offered it for sale, but after what I’m about to tell you that madness disappeared forever.

I was bored, so I loaded a few shot into it and fitted a rubber band. Then I cocked the gun and fired it at a styrofoam coffee cup sitting on a chair about 12 feet from me. I hit the cup once, then twice then a third time, and I realized that you don’t need 50 foot-pounds of energy to have fun with an airgun. I doubt this gun has more than one five-thousandth that much energy (a 1-grain shot going 60 f.p.s. has 0.01 foot-pounds of energy), yet it’s pleasing to see it hit a small target some distance away. In some of the vintage ads, like the one I have posted above, there were claims of being able to hit houseflies at 16 feet with these guns.

That got me thinking about springs, and how new airgunners think more powerful springs will increase the energy of an airgun. We know from testing that they often don’t. The rubber band of a catapult gun is a type of spring. What kind of “spring” will have the greatest effect on the velocity of the gun — a big thick one or several smaller ones?

Think about this — which spring will toss you higher — a normal one found on a pogo stick, or a larger coil spring from a car suspension? The pogo stick spring works well because it’s been selected to work within the parameters of the expected weight for which the pogo stick is designed. The car spring is rated to many hundreds of pounds, which makes it more powerful, but not a better choice for a pogo stick.

A pogo stick spring is lighter than a car spring, but because it is selected for the weight range of a person, it works better. 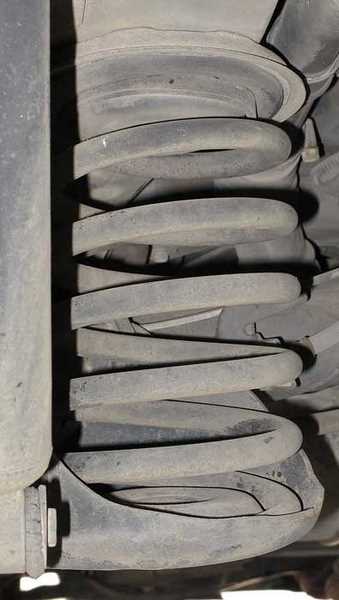 A car spring is stronger than a pogo stick spring, but it doesn’t work with people.

Sure, you say, it’s obvious the bigger spring won’t work as well on the pogo stick, or even at all. But what if it wasn’t that big? What if it was only a little larger than the spring that’s on the pogo stick now? The answer is that it might work, but maybe not as well as you think. The pogo stick spring was chosen to do its job with weights inside a certain range, and a heavier spring may not improve things.

The same holds true for airguns. Whether we’re talking about coiled mainsprings driving pistons,  compressed air inside a reservoir or even rubber bands, there’s an optimum range that works the best with the other parts of the gun. Anything outside that range is probably not going to work as well.

I plan to examine that thought using the Sharpshooter catapult pistol. This will be a normal test, with something more added.

The one nice thing about this pistol is I already know it is accurate. How accurate remains to be seen, but that’s what this blog is all about.