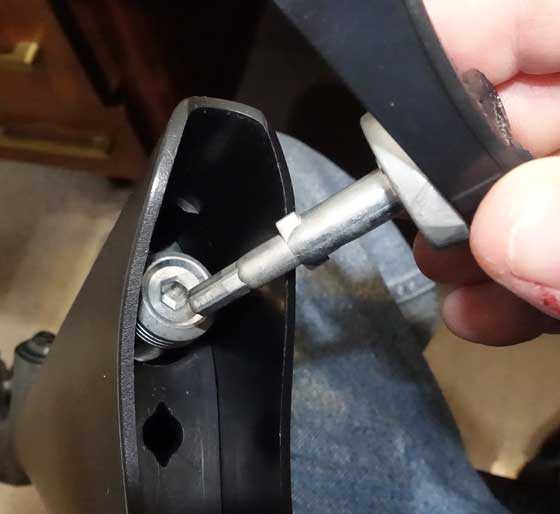 Today we look at the velocity and power of the new Ruger 10/22 Air Rifle. The rifle takes two 12-gram CO2 cartridges, so they went in first.

On my first try I got a total of about 22 powerful shots before the velocity started dropping linearly. I won’t give the velocities, because they aren’t representative. But I will tell you that I got velocities that were just as high on this try as on the next one.

With a shot count that low I knew what had happened. One of the two cartridges had failed to pierce. The rifle was running on a single cartridge. In the beginning that doesn’t make any difference, as CO2 is a self-regulating gas, But you do run out of gas sooner, which is exactly what happened.

The butt plate has the Allen wrench you need for piercing built right in! 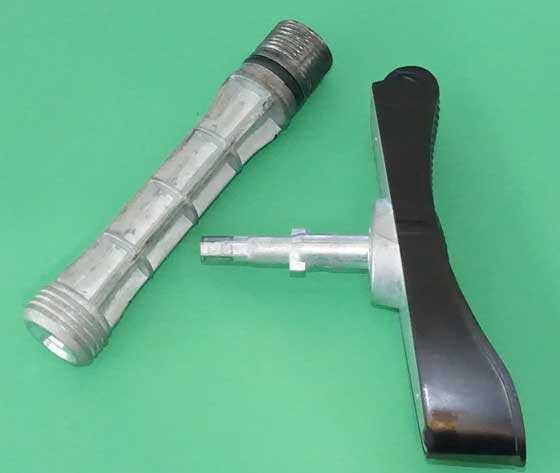 Here you can see the size of the piercing plug.

Sure enough, when I exhausted the gas and removed both cartridges, the top one hadn’t been pierced. No problem. Just screw the piercing plug in deeper next time. I could even reuse the cartridge that hadn’t pierced!

This time I screwed the piercing plug in as far as it would go. The shot count this time rose to 50+ shots, and I will tell you more about them as we go.

The spread was 41 f.p.s. At the average velocity Hobbys produced 6.11 foot-pounds of energy at the muzzle.

The first time I shot the rifle with just a single cartridge pierced the velocity spreads were very large, and the velocity dropped off with each shot. I had to wait 30 second between shots to get the velocity to stabilize.

The second time I did pierce both cartridges, and when I said I got 50 shots on them, that wasn’t actually the case. The piercing plug was still under too much pressure to release the remaining gas, so I loaded another 10 Hobby pellets and shot as fast as I could and still record the velocities. The first shot went out at 464 f.p.s. and shot number 10 was going 327 f.p.s. So, when you are outside plinking you can count on 6 full magazines from fresh cartridges.

After the first four strings

I wanted to see where the velocity was after the first 40 shots, so the last “official” string I fired was with 10 Finale Match Light pellets that averaged 609 f.p.s. on the first string. This time the average was 528 f.p.s. with a spread that went from 479 to 567 f.p.s. That spread is 88 f.p.s. and the average power is 4.68 foot-pounds. So the power has dropped off and the spread has become much larger toward the end of the gas.

If this was a single and double action handgun I would check the velocity both ways, so I checked it by just pulling the trigger and also by cocking the bolt first. There was no difference in velocity either way.

I was pleasantly surprized how easy the magazine removes and installs in the rifle. Once out, it’s also quick and easy to remove the 10-round rotary clip. Removing the mag on a 10/22 firearm can be a challenge, but with the air rifle it’s easy.

The specs say the double action trigger pull is 10 pounds. I have no good way to test it. It’s all of that and maybe a little more, but it is smooth, once the magazine is advanced and the striker starts moving. But the single action trigger pull is quite nice. The specs say 3 pounds. When I tested the rifle I’m writing about the pull registered between 5 lbs. 3 oz and 5 lbs. 4 oz. I guessed it was a pound lighter. It is a single-stage pull that way and you can feel the trigger moving but there is no creep.

Accuracy testing comes next. I’ll start with the open sights, then I’ll install an Axeon R47 dot sight that Umarex sent to jazz up the rifle and test with that.

The Ruger 10/22 Air Rifle is a realistic lookalike that shoots 17 .177 caliber pellets as fast as the trigger is pulled. It also has the ability to have a lighter trigger when the bolt is cocked. I’m really hoping it is as accurate as it looks. If so, it may be the one to get!