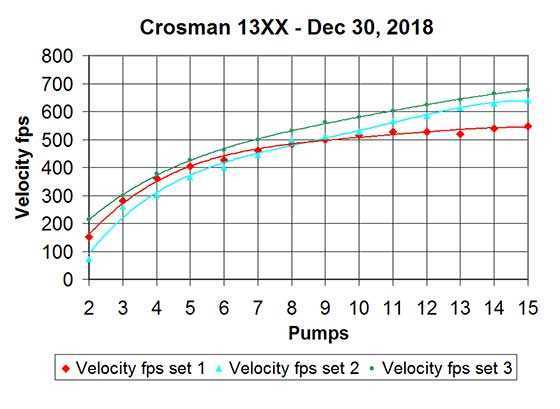 Today’s report is Part 2 of the conversion report on a Crosman 13XX pistol into rifle by reader Benji-Don.

And now, over to you, Benji-Don.

In this report all of my velocity numbers are with Crosman Domed 14.3 gr pellets. I have three sets of pumps vs velocity data to show the progression in the efficiency of the gun from the stock valve. In all three sets the stock 0.142-inch transfer bushing has been drilled out.

Set 1 – The rifle has the stock plastic barrel band, stock piston, stock valve, stock valve spring, and stock hammer spring. The transfer bushing had been drilled out to 0.156-inches (5/32) ID. For this set I dry-fired the gun until there was no air left between shots. I also did not record shots with obvious valve lock that effected the velocity. Sometimes that would be throwing out quite a few shots.

Set 3 – Is similar to Set 2 except it has the custom metal barrel band, and the light valve spring.

Note: The 0.172 inch ID leaves a very thin wall going to the valve gasket side of the transfer bushing that has an OD of 0.177-inches. I would stick with the 0.156 inch bushing and barrel opening there is not a significant increase in velocity going to 0.172 inches.

Here is a graph showing the results:

Pumps vs velocity. The lines are smoothed. The data points are raw data.

To see if there were barrel harmonics (vibration and/or wiggle) affecting accuracy I tried different weights on the end of the barrel. I pressed a Silencer Adapter 1.0 oz from the Maximus Hunter on the muzzle. It has the U.S. standard 1/2 inch fine bolt threads (20 threads per inch).

I have three different end weights that screw onto the barrel silencer adapter. 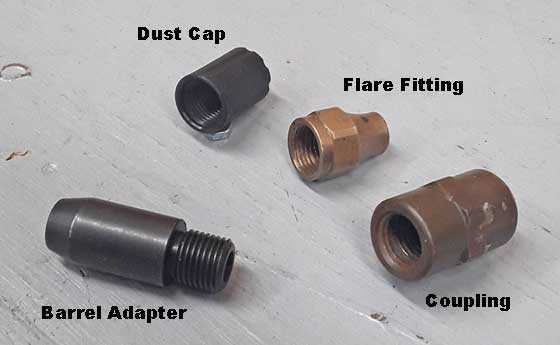 To really tune the barrel the copper coupling could be used — cutting it to different lengths to find the best weight and then adjust its location by how far it is screwed on the barrel adapter. I really don’t have the patience for that. I also have not had any issues with harmonics with the Maximus barrels.

My original 1322 gave me few issues and was accurate right off with Air Arms Falcon 13.43-grain pellets. I worked on my 13XX gun for over 7 months off and on and it took most of that time just to get it close to the accuracy of my earlier 1322 rifle. For much of that time the wind would be perfectly calm until I get set up and then the wind gusts would start. Trying to wait for the wind to calm for each shot can be very tiring and frustrating. 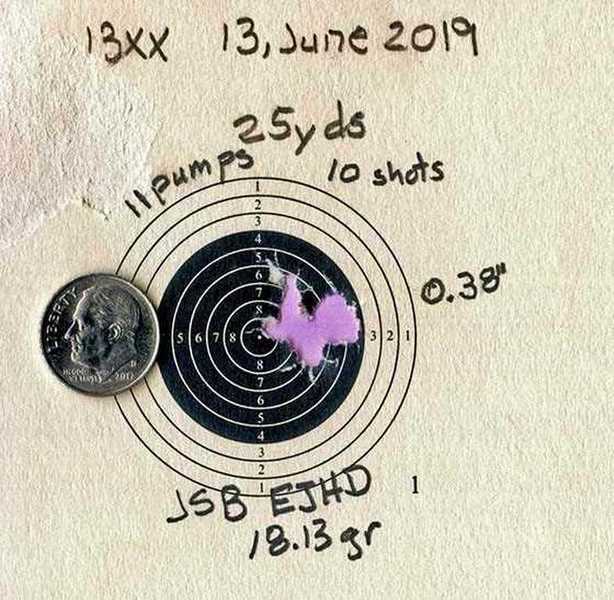 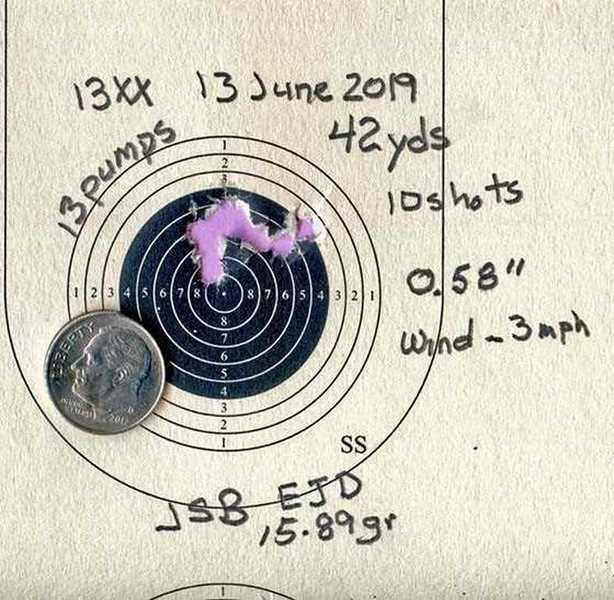 Based on the 42 yard shots I think the JSB 15.89 gr pellets would do better at 25 yards than the heavier pellets. I also shot a 0.46 inch 10 shot group with JSB 15.89-grain pellets at 35 yards on 11 pumps so it seems to be holding its group size as the distance increases well.

I knew when I started this project that it was going to cost more than the other Crosman 1377 and 1322 guns I have modified. I had $200 in my previous rifle without the scope. I wanted this one to be the best I could do. I even considered putting a high dollar target barrel on it but felt that would require someone else to do the machine work and I wanted to do this with the tools I have, or at least the tools I can make.

Here are the parts and costs of my new 13XX rifle:

If you are on a budget, adding the Crosman stock, steel breech and Maximus barrel will get you very close to the same results for about $80 plus the cost of the pistol.

Was all this money and work worth it? For me, yes, as this is my hobby and I like tinkering with airguns as much as shooting them. This gun gave me some challenges but with persistence I was able to develop it into a nice bench rest gun and I have a gun that is all metal and wood. I would guess that the Maximus would do about the same for less than $200 but requires an air source.

I would like to test it at further distances but only have 42 yards available in my back yard.