Any time an airgun is inaccurate at short range and it has a muzzle break or a silencer, you start investigating there. When I saw that mound of lead I knew I had found the problem. There is no way this pistol could be accurate with all the pellets hitting at that spot.

I made the remark that it was a good thing the lead was visible, because it would have been far harder to see if the pellets were just smearing along one of the baffles deep inside the silencer. However, to fix the problem the barrel had to be removed from the pistol so the silencer could be removed from the barrel. That’s because heat had to be used to break the adhesive bond between the barrel and silencer and I didn’t want the rest of the pistol to get hot.

To remove the barrel loosen the three screws atop the forward end of the receiver. Then pull the barrel straight out. 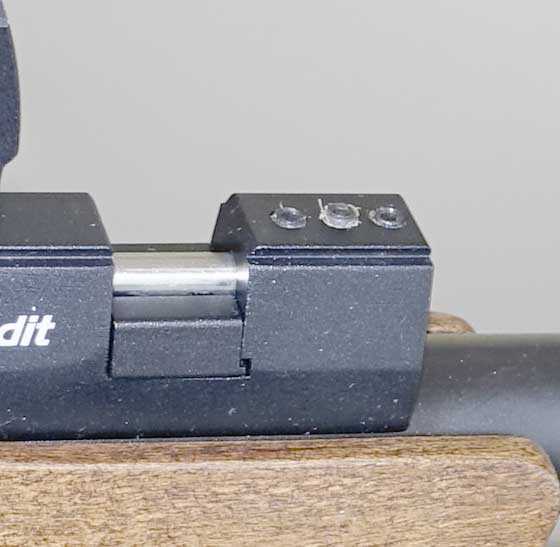 Loosen the three screws atop the receiver, then pull the barrel out. The center screw actually goes into a divot on the barrel, so unscrew it a little more. 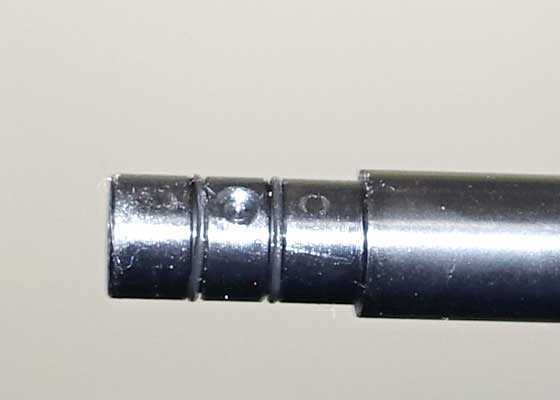 This is the barrel stub that comes out of the receiver. The central screw goes into that divot, keeping the front sight aligned.

With the barrel held tight in a padded machinists vise I heated the silencer with a heat gun. Then, by turning the silencer back and forth, it broke free and unscrewed in a few minutes. Now I could examine the baffles in detail.

I shined a light through from the back of the silencer and looked through the front. I saw that not one but FIVE of the baffles had lead streaks on their edges in a straight line that stretched toward the muzzle. When I pulled the silencer away from my eye to focus on the end cap, those streaks lined up with the lead blob on the inside! This pistol had no chance of being accurate from the very start! However, it didn’t have to stay that way.

With a drill bit I opened up the passage through all the baffles from 0.287-inches to 0.335-inches, including the end cap. That will give adequate clearance without increasing the muzzle report much, if any. I have fixed many other silencers this way over the past 25 years — starting with a Daystate Huntsman that I shot field target with in the 1990s. Don’t kid yourself — every silencer is suspect until it has been inspected.

If I had left the pistol alone the pellets would have eventually worn away the edges of the baffles that were in their way — and even the end cap. This is what sometimes happens when a gun that starts out not so very accurate and then becomes extremely accurate. How long it takes depends on how severely misaligned the baffles are, but they are seldom off by much. That end cap is the worst I have ever seen though, and it would probably have taken thousands of shots to wear it away. My way is more direct and immediate.

Once the silencer had been opened, I screwed it back on the muzzle of the barrel. Then the barrel went back into the receiver.

With the barrel back on the pistol, let’s return to the 10-meter range and shoot the same pellets that were tested last time. I’ll start with the JSB Hades.

In the last test Hades pellets gave me the best group of the test, with 4 pellets out of five in 0.31-inches at 10 meters. 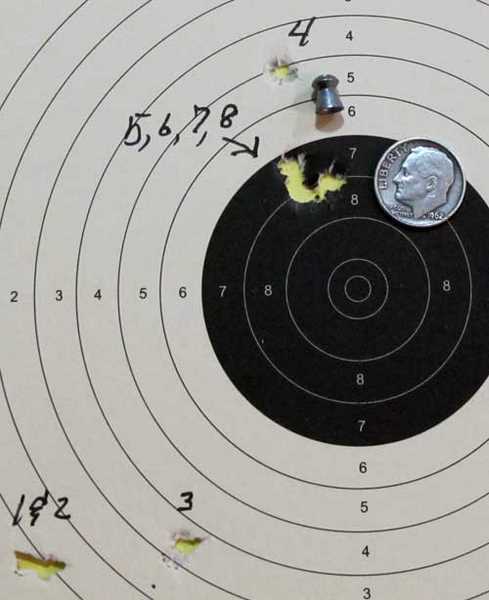 I thought I had nailed it in the last test when I shot this target. Pellets 5 though 8 and in 0.31-inches at 10 meters.

But after that first “good” group, Hades pellets blew up and gave groups that measured several inches between centers. Many of them hit the paper sideways. Let’s see what they do, now that the silencer has been opened up.

This target was the sight-in target. I hadn’t removed the UTG Micro Reflex dot sight from the pistol since the last test of the Bandit, nor had I adjusted it, but the barrel has been removed, so of course it would most likely not hit in the same place.

I filled the pistol to 180 bar. I knew from before that was the best fill pressure. That will become important in a bit.

The first shot went low and to the right, so I cranked in a lot of up and quite a bit of left adjustment. The second shot hit just below the black at 6 o’clock, so I decided to shoot three more shots to see if the pistol was going to group. The next three shots landed above the second shot, which told me that 180 bar was a little too much pressure for this particular pistol. The four shots are in a group that measures 0.977-inches between centers. That told me the pistol was fixed! 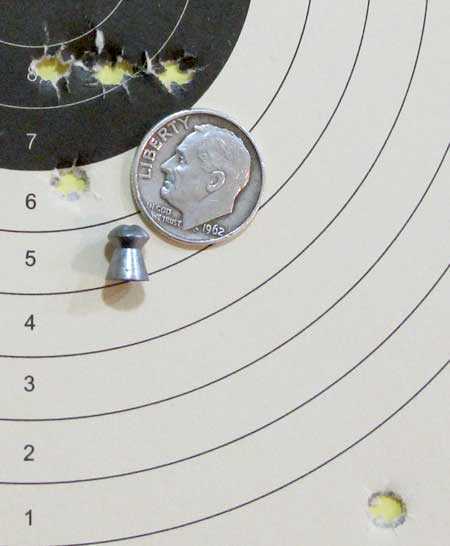 This target told me a lot. The first shot was low and right, so I adjusted the dot sight up and to the left. Shot two was below the black and shots three through five are in a horizontal line inside the bull. That tells me that 180 bar is too much pressure for this pistol. I also know that my silencer fix worked!

Did the modification of the silencer change the discharge sound? Normally I would tell you that my old ears are too far gone to be precise about this, but on this particular day I was wearing a brand-new pair of prescription hearing aids that correct my hearing in 17 different frequency channels. These puppies cost me a bundle but I’m now hearing sounds I haven’t heard since entering the Army in 1970. Yeah — that was a half-century ago! And the Bandit is still extremely quiet. I doubt the discharge sound has changed much at all. So, for this particular pistol, what I did was a job worth doing.

I still wanted to check the fill, which I am monitoring on an oil-filled gauge on my carbon-fiber air tank. So I filled to 185 bar and commenced shooting at the next target. The first three shots hit in the white below the bull and then five shots went into 0.526-inches in the bottom of the bull. Yes — this Bandit is fixed. And yes, it does not like a fill to 185 bar. The dot sight was not adjusted for this series of shots. It was the change in air pressure alone that raised those last five shots. 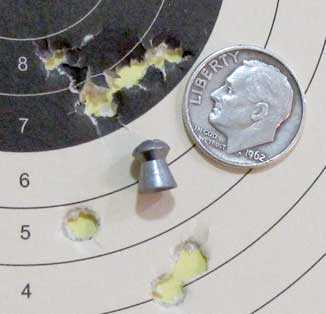 With a 185-bar fill the first three Hades pellets landed below the bull, then five more went into 0.526-inches inside the bull. That upward movement of the pellets is from the changing air pressure, alone.

After the last target I adjusted the dot sight 2 clicks up and one click to the left. And you would think after seeing the last target that I would know when to stop filling the pistol, but remember, I told you that it fills very fast. This time I lost track of the needle (it was vibrating!) and it ended up at 190 bar. Well — I had a plan to deal with that.

I shot 6 Hades pellets into a group that measures 0.748-inches between centers at 10 meters. Notice that the last two shots hit the bull inside the black. I watched them through my spotting scope because I figured they would climb, from what I had seen thus far. The fact that they did tells me I know what this pistol is doing. 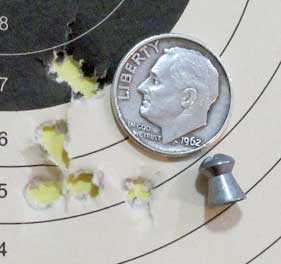 Hades pellets with a 170-bar fill

I adjusted the dot sight up 4 clicks and left 2 clicks. And I did not fill the pistol with air again. At this point I guessed there was about 170 bar of pressure remaining in the tank, so I simply shot five more Hades pellets at a fresh target. Look what happened! 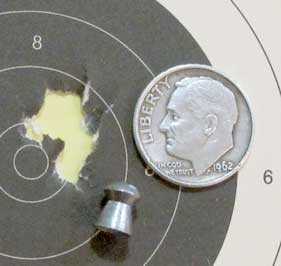 By this time I was very familiar with how the valve on my carbon fiber air tank operates. I managed to stop the fill at exactly 170 bar! Then I loaded and shot 5 JSB Exact Jumbo Heavy pellets. After checking that the first one struck inside the bull I just shot the remaining four without looking. Five pellets made a 0.426-inch group at 10 meters. 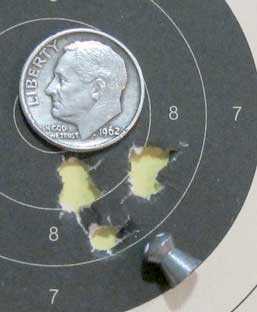 The last pellet I tried was the .22-caliber RWS Meisterkugeln wadcutter. In the last test these were the most accurate pellets, though they did not respond to a sight adjustment. So I suspect they were hitting the baffles, too.

This time the Bandit put 5 Meisterkugeln in 0.452-inches at 10 meters. And that settles it — the Bandit has done demonstrably better with all three pellets, now that the baffles are open and out of the way! 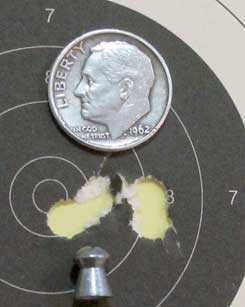 Five RWS Meisterkugeln made this 0.452-inch group at 10 meters.

The Diana Bandit is a remarkably accurate air pistol when it is allowed to shoot without encumbrance. Today’s report is a landmark one because we saw a problem, then saw the fix and the proof that the problem was resolved.

Some of you will notice that I was shooting the pistol single-shot today. With the silencer problem being addressed I didn’t want the magazine to become another variable. I will return and test the pistol with the magazine in one final report.

We also learned that this specific pistol likes a fill to 170 bar on the gauge of my carbon fiber tank. This is something you have to find out for yourself and I have now shown you how to do it.

Finally we learned that the Bandit gets only a few shots on a fill. Now that I have the 170 bar fill limit nailed down I will try to stretch the shot count next time when I test with the magazine.

I DO NOT recommend that any of you do what I did to fix your silencers! I know how to do this so the silencer is not ruined. If you have a problem like this with your air pistol you now know what it could be. Let the company that sold you the gun fix it.

Some of you are machinists and know how to do what I did even better than I did it. A lathe with a boring bar would be great if you know how to operate one. Or even just a drill bit chucked in a tailstock would be a better way to do it.

The Bandit is a very impressive air pistol! At just $150 it is a price-point precharged pneumatic pistol! That would be a PPPPP. If you can handle a pistol and don’t mind spending the money for a GOOD dot sight like the one I am using, this might almost be your best entry into the world of PCPs! Since the fill is only 170 bar, you could easily fill this pistol from a hand pump!