I’m doing this accuracy test because I discovered that in a test run many years ago I shot my best targets when holding the Haenel 311 target rifle with an artillery hold. In the last test I laid the rifle directly on the sandbag and I wondered how the artillery hold would affect the groups.

I shot 5-shot groups with each pellet, but with one pellet I shot several groups for different reasons. I did try my hardest to shoot well. I shot from 10 meters.

First up was the Air Arms Falcon pellet — the only domed pellet in the test. In the last test with the rifle resting on the sandbag, the 311 put 5 Falcons into a 0.466-inch group. This time using the artillery hold the same Falcon pellet went into 0.571-inches. It’s close, but the bag rest seems better. 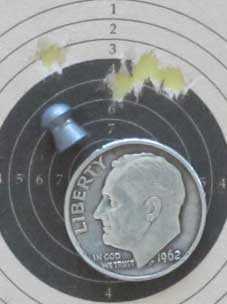 I noticed that the pellets were hitting the target high, but since I had many different pellets to test I left the sights where they were. I mentioned in the last report that the Haenel rear sight does not have marks to indicate which way to turn the adjustment knobs, and it always takes me a long time to figure it out.

The H&N Finale Match Light wadcutter is the pellet I shot many times in this test. The first group was the smallest for the pellet, as well as for the test, with five pellets going into 0.278-inches, center-to-center. 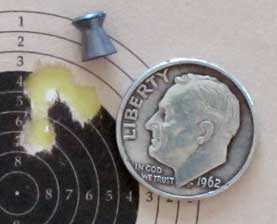 This first group of H&N Finale Match Light pellets was the best group of the test.

Okay, now I had a heavier pellet that was also hitting high and right. It was time to adjust the sights. The next target I used to fiddle with the sights — figuring out which way to turn the knobs. When I finished I had the Finale Match Target pellet hitting close tom the center of the bullseye.

This group also hit the target high and slightly right, and I wanted to adjust it closer to the center of the bull. So the next target I used to adjust the sights down and to the left. I probably fired 6 or 7 shots at that one and it looked like I had the pellets striking the center.

On the next target I fired 6 shots at the bull. Yes, Yogi, I miscounted! This group measures 0.538-inches between centers. It is centered better, but also spread out more than the first one with this pellet. 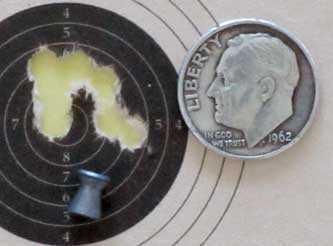 The second group of Finale Match Light pellets has 6 shots instead of five. It measures 0.538-inches between centers.

An alibi in a match is when a shooter has a problem that may allow him to shoot again. I had one in this test that I need to tell you about. The automatic safety on this 311 has not been right since I disassembled the rifle several decades ago. Now it’s getting worse and it’s affecting the trigger. I have to pull it out and push it back in several times to get the trigger to function.

The trigger was both heavier and less responsive in this test than it has ever been. I can usually deal with a bad trigger, but not when it’s on a 10 meter rifle. I am certain that it caused me to throw many shots throughout today’s test.

Next I tried five RWS R10 Match Pistol pellets. They are also well-centered on the target but not tight. Five went into 0.495-inches at 10 meters. 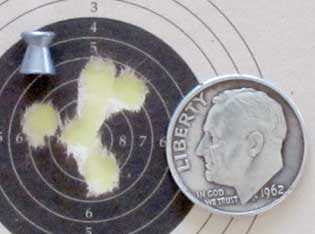 The next pellet I tested was the Qiang Yuan Training pellet. These pellets sometime surprise us with their accuracy. But not in the Haenel 311. Five went into 0.509-inches at 10 meters. While that’s okay compared to the other pellets today, it’s hardly in the running for a 10-meter target rifle . 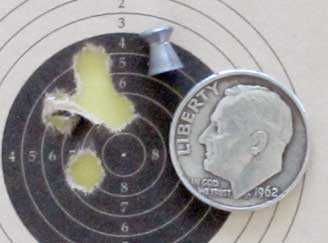 The last pellet I tried was the Gamo Match. That’s the pellet that put five into a group with no measurable dimension, back in 2011. 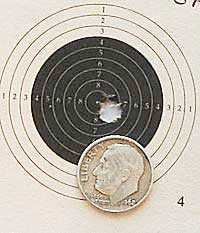 Back in 2011 this 311 put five Gamo Match pellets into a group that was too small to measure.

In this test the 5-shot group was larger — at 0.395-inches between centers for five shots, but I am certain the trigger caused some of that. 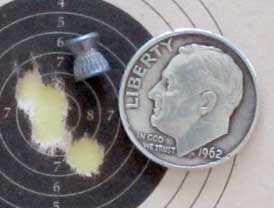 Does the artillery hold make the Haenel 311 more accurate? I think you can see that it doesn’t. Resting directly on a bag is fine, given the rifle’s low recoil.

This particular 311 needs some work. I have discovered than many 311 shooters remove all the automatic safety parts to get them out of their way, and the problems I am having with the trigger are probably why they do that.

Overall the 311 is a delightful target rifle with the two exceptions of the automatic safety and the effort it takes to cock the rifle. The cocking probably can’t be fixed but that auto safety is probably something to consider.

By the way, I am adding a Haenel 312 sidelever target rifle to the list of airguns I’m looking to purchase. I have never even shot one of those.

This will be my last look at the Haenel 311 for a long time. It’s decent but doesn’t inspire me like other vintage target rifles, such as the Walther LGV, do.