These days you can get either this rifle or the new .50-caliber rifle with the standard 490cc tank that fills to 3000 psi and gets 3-6 shots, depending on the bullet fired and the power setting, or you can get the carbon fiber tank with the TX2 valve. That one fills to 3,.600 psi. The TX2 valve opens more to pass more air and it closes faster to conserve air better. It does use more air with each shot, but it also has more air. Expect 6 or more good shots from a fill to 3,500 psi.

The TX2 valve uses more air to give the bullet more of a push. That equals greater velocity which means more power. Do you need that to hunt big game? No. A .45 caliber big bore that produces 500 foot-pounds at the muzzle will take down a 2,000 lb. American bison, which is about as big as it gets. Whitetail deer are being taken with relatively small caliber big bore airguns such as .357s and even .308s!

Why a big bore?

Currently many people are thinking about a time when they may have to hunt for their food. Certainly a firearm can do all that needs to be done, but there are concerns that, when the time comes, there may not be any firearms, or it may not be possible to use them or get ammunition for them, and what do you do then? I am showing you how to load ammunition for that reason.

Yes, we can discuss bows and other things. Airguns are just one solution. However, they are the topic of this report.

Enough talk about the why. Now let’s find out about the how.

The valve in this rifle is not the simple knock-open design familiar to most PCP airgunners. It does work that way, but this valve is balanced to not need a powerful thump to knock it open. Instead of just slamming the valve open the way most big bores do, the Texan’s valve opens more precisely. The amount of time it remains open is partly controlled by the gun’s tuning mechanism and partly by the weight of the bullet that’s being shot.

A heavier bullet moves slower, and therefore remains in the bore longer. As long as the bullet is in the barrel, it prevents all the compressed air from escaping, and the air pressure continues to push back against the firing valve. That back pressure prevents the valve from closing.

The valve dwell time, or the time it remains open, is therefore a combination of the tuning mechanism adjustment and the weight of the bullet. The results are fantastic—better than any other big bore has ever achieved.

A Texan shooter can, at will, change the amount of force with which the striker hits the valve by simply adjusting the bullet tuning mechanism or adjuster. To do this, the sidelever must be forward to expose the adjustment wheel in a window on the left side of the frame. The wheel in that window is turned clockwise to increase the tension on the striker spring for lighter bullets and counterclockwise for heavier bullets. 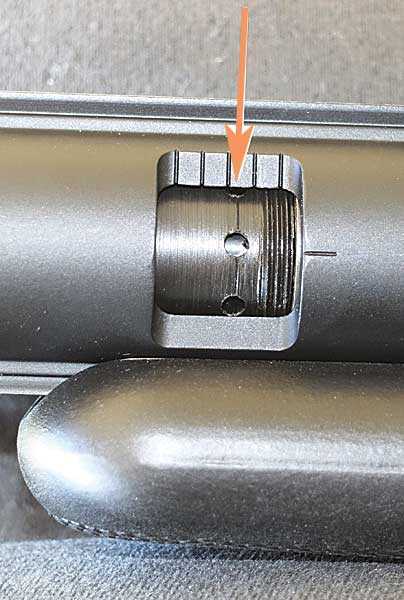 The bullet adjuster on the left side of the frame is exposed when the cocking lever is forward. This is my very early Texan that I have adjusted for heavy bukllets. Use something like a ballpoint pen to move the wheel. Push the holes up to turn the wheel out (longer valve opening time) for heavy bullets and down, which is in, for lighter bullets. The marks along the top are rough references. The adjuster is set at about  2.5 (arrow).

This adjuster is called the bullet adjuster because it is adjusting the gun to the bullet. Yes, the power is affected, but the bullet is what is being adjusted for.

Yes there are other big bore air rifles that get up to 10 shots per fill and I wouldn’t want to be hit by any of them! But the last shots those airguns fire have nowhere near the power needed to dispatch large game humanely. The last of the (perhaps) 6 shots of a Texan can still do the job, as they have greater power than the first shots of those other big bores.

When the striker spring was properly adjusted, I got six shots with a 215-grain .458 pure lead semi-wadcutter bullet on a single fill of air. The velocities of those six shots that started with a 3,000 psi fill were 835 f.p.s., 899 f.p.s., 882 f.p.s., 870 f.p.s., 856 f.p.s. and 830 f.p.s. The lowest energy in that string was 329 foot-pounds and the high was 386 foot-pounds! I’ve never seen a big bore rifle put out six consecutive shots at that power level on one charge of air! In fact, until I saw that chrono ticket, I had been refilling the rifle after every second shot. Suddenly, it dawned on me how differently this gun works!

Now that I’ve shown you what a Texan can do on a fill of 3,000 psi, what can those other radical big bores that fill to 4,500 psi do? There are several on the market and while they are not exactly in high rate production, they should be considered.

Well, they are powerful. Some get over 600 foot-pounds of energy on their first shot. But shot two drops below 500 foot-pounds and then it’s time to refill. Only you won’t get a full fill because your carbon fiber tank is no longer at 4,500 psi.

Another thing most shooters don’t appreciate—in fact, many cannot believe that bullets from a big bore airgun go right through medium-sized game and out the other side. Unless they hit a large bone inside the animal, that bullet will slip right on through. I’ve experienced this personally several times, plus I’ve heard the same thing from other hunters. Big bore bullets are seldom found inside animals like whitetail deer and sheep.

During this testing I shot my own cast bullets plus bullets that were provided by Tin Starr. They make bullets for cowboy action shooting around the country and they also make big bore lead bullets

Tin Starr bullets that worked best were the 405-grain hollow base on the left, the 350-grain flat nose, 240-grain round nose and finally on the right is the best bullet of all—the 215-grain semi-wadcutter. 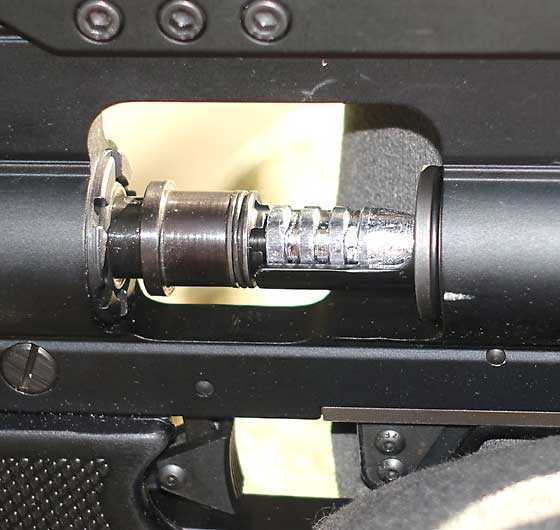 A bullet is in the loading trough, waiting for you top push it into the breech.

I said I would talk more about cocking the rifle. The sidelever does not work the way you imagine it should. There’s no heavy spring to fight against the forward movement of the lever. It takes about one pound of effort to swing open the breech for loading.

Okay, if the lever is easy to open, then the effort has to come when it is closed — right? No, that’s wrong, too. The closing effort is also minimal. It might take as much as five pounds to close the action. Somehow, all the effort of cocking the striker spring has been bypassed! It’s like getting free money or seeing an election promise that’s actually delivered!

When you do this is you’re only compressing a 22-lb. spring. That’s very light.

Can it be uncocked?

The ease of this operation gives you a clue that the Texan’s action is different than any you have ever tried. But there’s one more huge question to ask. How do you uncock this beast?

Other big bores are uncocked by grabbing hold of the bolt or cocking handle and pulling the trigger. When the sear releases the striker, you ride it forward with the bolt handle until it comes to rest against the valve stem. If you didn’t restrain the striker, dry-firing one of these monsters is enough to draw attention to yourself from several houses away.

The Texan uncocks much easier. When the gun is cocked, open the lever all the way again and then pull it closed just far enough to allow the automatic safety to be released. The sidelever handle has to move back about ¾ of an inch for this. Then, just pull the trigger and the sear will release, allowing the striker spring to relax. It’s completely safe, even though you’re uncocking a rifle with a 600+ foot-pound potential.

Now that we have a good start on the Texan, where shall I go next? I have a good idea, but I would like to hear your input.