Today’s report is another guest blog from reader Ian McKee who writes as 45 Bravo. Today he tells us how airsoft and BB magazines work.

If you’d like to write a guest post for this blog, please email me at: [email protected].

A lot of replica air guns have removable magazines to replicate the look and function of the actual firearm they are copied from. 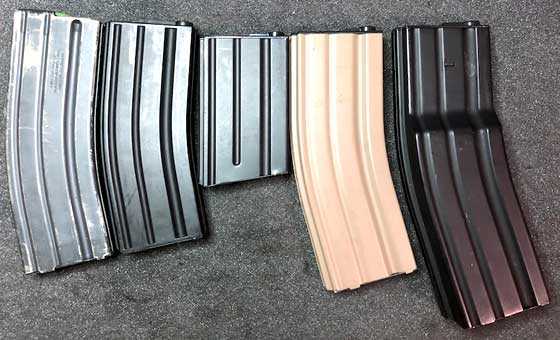 Both airsoft and BB guns, use the same magazine design. The only difference being the size of the projectile being used.

As much we would hate to admit it, many of our replica BB guns were first produced as airsoft guns. A LOT more replica airsoft guns are sold, compared to the replica BB gun market, partly because of laws in many countries that have more stringent regulations on BB guns than they do on airsoft. And parents perceive that the plastic airsoft projectile is less dangerous than steel BBs.

Spring-powered models that have to be manually cocked for every shot, normally have a full sized magazine that holds just 15-30 of the airsoft projectiles in a single column stack, and the magazine sometimes has small metal inserts inside to give the magazine some extra weight.

Some CO2 BB guns like the Umarex Legends PPK/S, have a small removable stick magazine and keep the CO2 inside the gun, while some designs like the Sig We The People 1911 BB pistol, and the Crosman SBR (short barreled rifle) have a removable full size magazine that holds the CO2 and the BBs together in one removable unit. 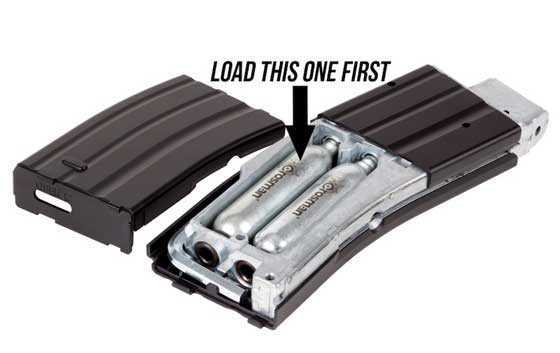 Most of them are very similar

But no matter how the airguns function, the BB feed mechanism in the magazine is the same, the projectiles are held in a channel, either single stack, or double stacked, and have a spring-driven follower that pushes the projectiles up to the feed lips, ready to be fed into the chamber when needed.

Do they look similar? The one on the left is from the Sig We The People BB pistol, the other one is from an airsoft 1911 I have used for over 10 years. 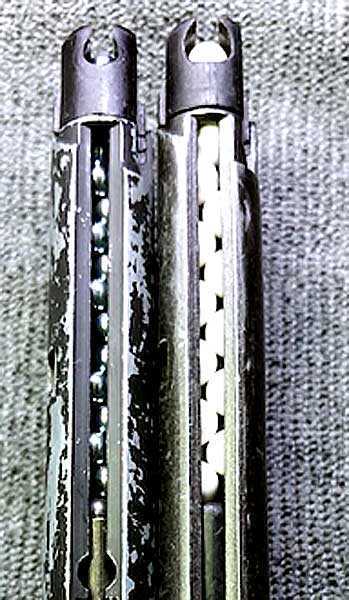 This detail shot shows the similarities much better.

Airsofters that are into military simulation games (Mil-Sim), like to use a magazine that features a similar capacity as the firearm it replicates. That way the number of their magazine exchanges  plus their load out (the number of magazines they must carry) matches their real world counterparts.

Some magazines for automatic electric guns (AEG) use what is called a mid-cap mag, where the channel that holds the projectiles under spring pressure is longer, and may hold 60-100 projectiles. One of the advantages of a mid-cap magazine is since the BBs are under constant spring pressure, they don’t rattle when you run. 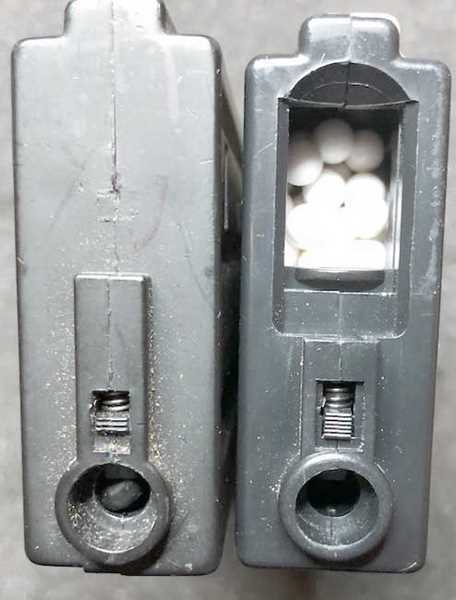 There is a spring loaded tab at the top of each magazine to keep the BBs in place until the magazine is loaded into the gun. The mid-cap mag. is on the left. 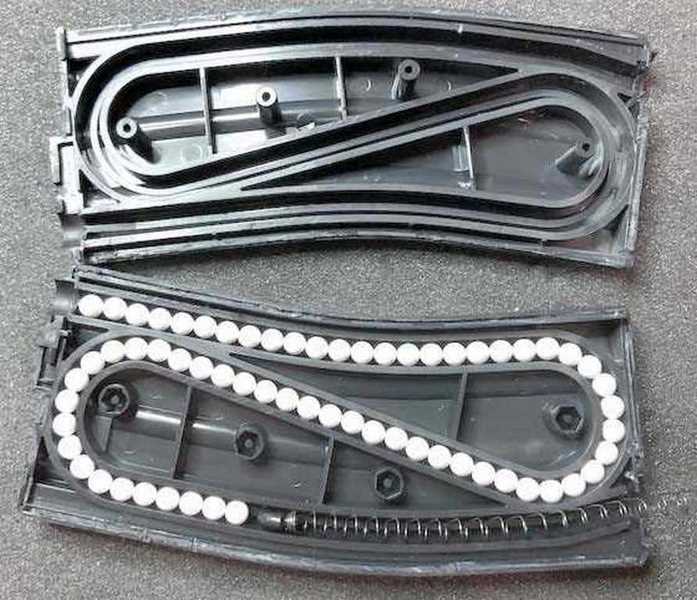 The BBs are under constant spring pressure while inside the mid-capacity magazine.

The most common type of magazine for the electric guns are high capacity or “high-cap” magazines. They can hold anywhere from 150 to 1000 rounds or more, depending on the size of the reservoir that holds the projectiles before feeding them into the feed channel. 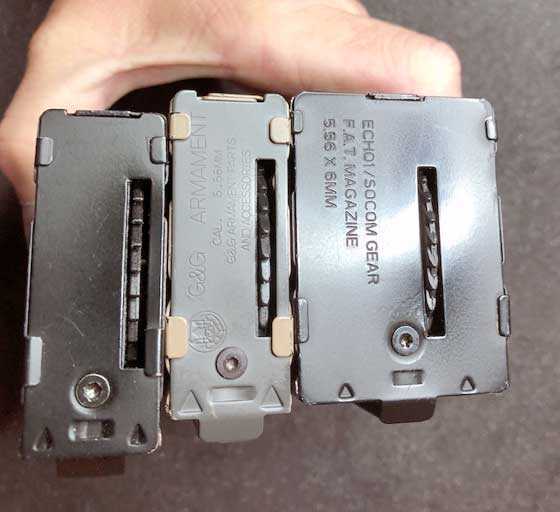 The high -cap magazines have a hopper that you pour the airsoft BBs into, and normally they have a wheel on the bottom of the magazine that you wind to compress a clockwork style spring that drives the feed mechanism to feed the BBs from the hopper to the gun. 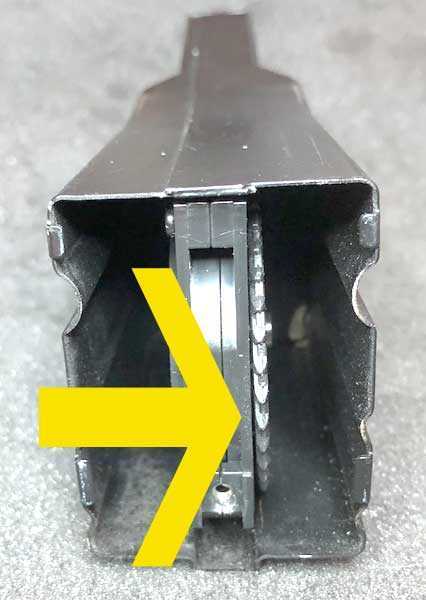 That toothed wheel (arrow) is wound to compress a spring that pushes the loose BBs up toward the feed lips of the magazine.

Unlike the other magazines that may have the gas stored in them, the high-cap magazines just hold and feed the projectiles. As the gun cycles, it strips off the top projectile, feeding it into the chamber. It doesn’t matter if the gun is electrically operated, or run from compressed air, or CO2 from a remote tank. 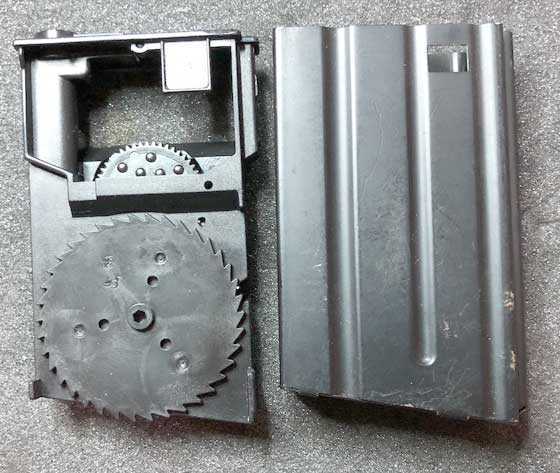 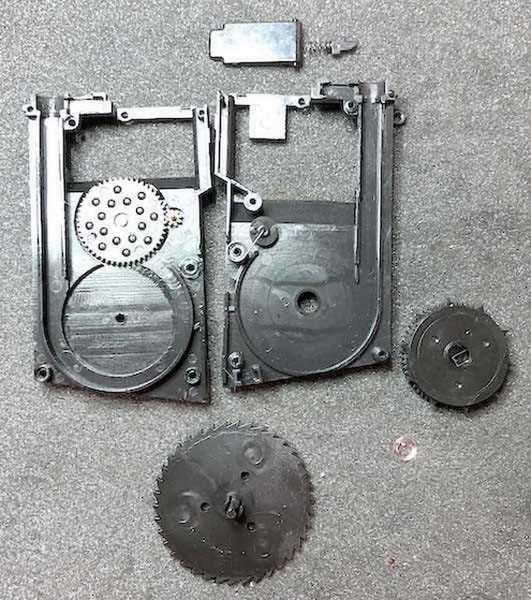 The insides are all the same, the larger magazine shells just hold more of the projectiles.

As you can see, they all have the same basic components. The highcap magazines hold the projectiles in the open areas and feed them into the feeding channel, and then into the hopup/nozzle area of the gun, as they are fired. 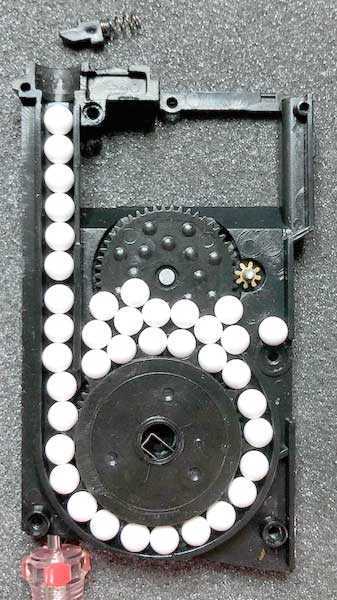 Here you see how the hi-cap mag. takes the loose airsoft BBs and organizes them into a feed channel. That spring you wound with the exposed wheel powers this internal mechanism.

The major downside of a high capacity magazine, if you are playing in an airsoft game, is once you start shooting, there is open space in the hopper area of the magazine, and the bbs rattle when you run. So when you run from cover to cover, you sound like you have a half empty container of Tic Tacs in your pocket.

By these photos, you would think all airsoft guns are based on the AR-15/M4 platform, but you would be wrong. These were just the magazines I had on hand. Magazines of all capacities can be had for any replica, AK47 & AK74, FN-p90, HKMP5, FNFAL, HKG3, MP7, Thompson M1A1, M14 (ALL of these replica machine guns, and others not listed do come with the giggle switch here in America.)

If you can think it, it has probably been made into an airsoft gun, with magazines and gearboxes adapted to feed it and fire it.

Airsoft replicas are available from a Mosin Nagant 91/30, to an electrically operated M134 multi barreled minigun! 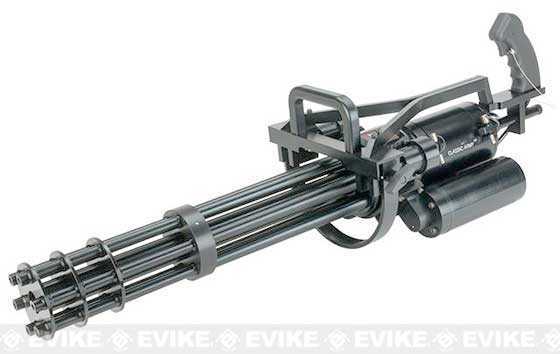 Coming in the future

In a future article, we will cover airsoft gearbox types, and other types of airsoft power plants.

78 thoughts on “How airsoft and BB gun magazines work”