The title of this report has changed. Last Friday I opened with the title, What’s it gonna be today? to keep you in suspense about the topic. I wanted to give you the background of how I came to own a Diana model 10 air pistol because of its importance in my life. You see — this is the air pistol that turned me into an airgunner. Yes, I owned airguns as a kid, and I’ve talked about them in this blog. But when I started experiencing my Diana model 10 everything changed. I realized for the first time that airguns were just as serious as firearms. A few years later I would discover that the rest of the world was experiencing the same thing.

At the 1984 Olympics 10-meter air rifle competition was introduced, and four years later air pistol competition joined the ranks. Surprisingly, Crosman was at the forefront for both 10-meter air rifles and air pistols — at least here in the United States. In 1985 they introduced their model 84 Challenger CO2 target rifle that was intended to go head-to-head with world-class target rifles. It was a very special airgun for them that was never mass produced. Each rifle was actually made by hand, and my good friend, the late Marvel Freund, was one of the principal advisors. Marv received a rifle with a nameplate for his contribution. Marv was a coach of a youth marksmanship program in northern Virginia and was an early proponent of getting kids into shooting. But the model 84 wasn’t for kids. It was a full-sized adult target rifle. According to the Blue Book it was even offered with an optional electronic trigger. But at a base price of  $1,295 in 1985, it cost more than other 10-meter world-class rifles and was never a threat to the market.

This Crosman model 84 Challenger was presented to President George H. Bush. This photo is from the National Firearms Museum.

But Crosman didn’t stop with the rifle. They also enlisted the services of Swedish Olympic gold medalist, Ragnar Skanakar, who won one gold, two silver and one bronze medal in 50-meter free pistol competition, to guide the design of what became the Crosman model 88 Skanaker 10-meter target pistol. It was made from 1988 until 1991. That one was also powered by CO2 for two very good reasons. Crosman was a leader in CO2 guns at the time and CO2 was what was still being used for target airguns in the late 1980s. The ’90s saw the complete transition to pneumatics, and Crosman made the switch as well, but in this century. I have already reported on their Challenger PCP youth target rifle.

The model 88 Skanaker was a real world-class target pistol, but the use of CO2 hamstrung it, because compressed air made operation so much easier, as well as more stable. I have owned a Skanaker, but found it a bit too front-heavy for my liking, and I like heavier handguns. The grip is quite good and accuracy is where it should be for a target pistol.

I told you all of this to inform you that the 1980s were a time when target airguns went from unknown to red-hot worldwide. And that was exactly the time I was getting into airguns, with my Diana 10 leading the way. Sadly, in a crisis of irony, although I shot 10-meter privately, it would be another decade before I started competing, and my first model 10 was long gone by that time to settle debts.

So, when several readers commented that they thought the model 10 was the epitome of a vintage target air pistol, I couldn’t have agreed more. I have owned one other Diana 10 in the interim, but I let that one get away, as well. So getting to test this Beeman 900 for you is a real treat! Okay, let’s get started.

I mentioned in Part 1 (titled, What’s it gonna be today?) that the model 10 trigger is very adjustable. Here is a page from the manual. 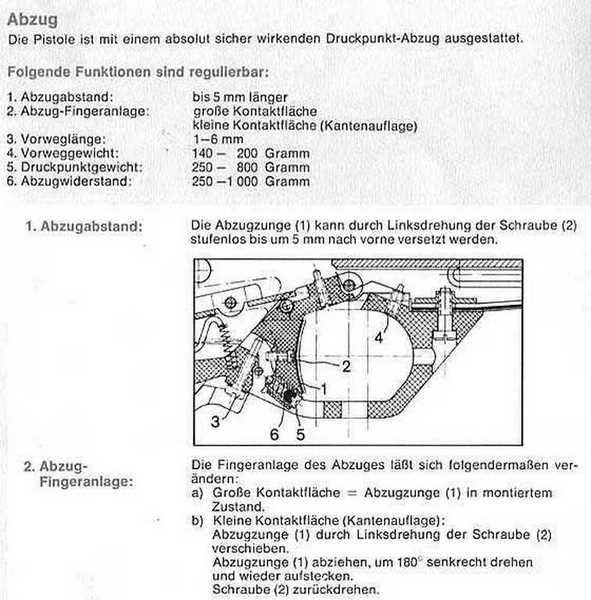 Here are the trigger adjustment instructions from a German manual.

And here is a closeup. 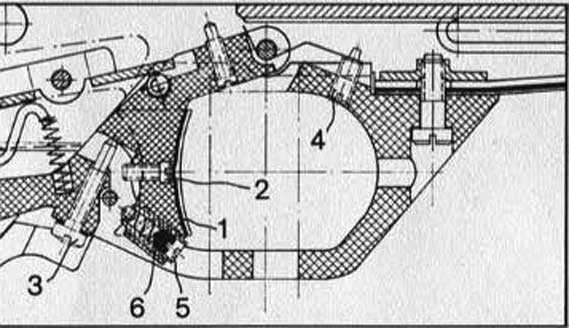 Here is the Diana 10 trigger detail.

I was going to walk you through adjusting the model 10 trigger in this report, but there are several reasons why I can’t do that.

1. The page above is from a German manual and, although I have translated a lot of it, the translation leaves a lot to guesswork. I need an English manual — or at least the trigger adjustment portion of one.

2. I was relying on my knowledge of the Diana model 6 trigger adjustments to help me through this, but the model 10 trigger has more adjustability and I will miss things if I go that way.

I can tell you this. Stage one is adjustable for the length of pull and the weight. Stage two is adjustable for weight. The trigger blade can be canted to the right. I don’t see a trigger stop, but this trigger doesn’t move very far in any case. So a stop may not be important.

If I start guessing about these adjustments I could easily mess up a perfectly good trigger, as well as confuse many of you readers who follow what I write. I prefer to wait for someone who has the right information.

I can report that the trigger on the test pistol has 5 or 6 mm of stage one travel, with very little weight in stage one. Stage two breaks crisply at 14.4 ounces, which is 408 grams. That’s below the 500-gram minimum for a match air pistol, but since I don’t compete anymore, I don’t care. The trigger stops moving after the gun fires.

With just this first pellet I have verified that this pistol is right where it should be for power. That means the piston seal has definitely been changed.

Next I tried the lead-free H&N Match Green pellets. They are pure tin and weigh 5.25-grains. We often can’t or shouldn’t use lead-free pellets in lower-powered airguns because they might stick in the barrel, but this pistol is powerful enough that it isn’t a problem.

This Beeman 900 is performing right where it should. Perhaps when it was brand new in the 1980s it was a trifle faster, but it’s still good today. There is no doubt in my mind that it’s been resealed at some time in the past.

I told you in Part 1 that the “lump” on the plastic barrel protector was a hand protector for cocking the pistol. And it is. If you look at the shape of the lump you see that it is rounded to protect the hand. But that’s only one of its purposes.

The other purpose of the lump, and the name it carries in the manual, is the barrel weight. That is its intentional purpose. Reader Geezer commented on that and he is right. But as a 10-meter competitor I can tell you that as a barrel weight, the lump isn’t much.

The pistol cocks with 25 lbs. of force. Because it is a pistol, your two hands are close together during cocking and it seems easy enough, though you will notice the force. What I’m saying is — this isn’t a light-cocking air pistol. Some folks will find it very difficult.

Last time I told you about the orange front sight and you got to see it. Since then I have scraped off most of the paint. I will remove it all and prep the surface for some kind of black paint. A black marker is probably good enough and I do want the paint to be matte, so I’ll ponder that a little more.

So far the Beeman 900 is performing quite well. It’s so much like I remembered, and yet the years have adjusted my eyes for all airguns, so I see things I didn’t see before. I just hope it is as accurate as I remember.