Today we continue accuracy testing the FWB 110 recoiling target rifle. This test will set us up for the next step with this rifle, which is a reseal and lube, and also for testing against other recoiling 10-meter target rifles.

I shot from a sandbag rest at 10 meters from the target. This time I rested the rifle just in front of the triggerguard, as was mentioned in the comments to Part 3. Some other shooters said they got their best results that way.

I also used my prescription glasses instead of my reading glasses for this test. I noticed the other day that the front sight seemed clear through them.

I started with RWS R10 Match Heavy pellets, and, because I felt the rifle was already sighted in from the last test, I just started shooting. Wrong! The first group landed above the bull. All in all it took 15 shots to get the pellets hitting the center of the bull again. Part of that was me adjusting the rear sight the wrong way — twice! The German directions that say bei H (for hoch which is German for high) or bei T (which is German for I don’t know what, but it means down). Bei is a German preposition meaning “at” but when it relates to sights, substitute the English word “too”. So, if the pellet strikes too high for you, then adjust the knob toward the H, because the pellet is striking too high.

Maybe reader Stephan can clear this up for us/me. I always thought the T stood for tur or tür, but that means door. I’m missing something.

There are “experts” on the internet who will tell you that German target sights adjust just like American ones, so forget the directions and just adjust as you normally would. These people have apparently never encountered sights that adjust backwards of most American sights. But I have, so I pay attention to the directions on the knobs.

When I figured everything out I was able to zero the R10 Heavy pellets.  Once that happened I didn’t touch the sights for the rest of the test.

The first group was shot with RWS R10 Heavy pellets that we discovered in the last test were accurate in the FWB 110. Five went into a group measuring 0.194 inches between centers. 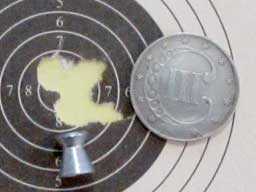 I shot the Qiang Yuan Olympic pellets next. Five of them went into 0.122-inches, which is the smallest group of this test. It earns the gold dollar for size comparison. 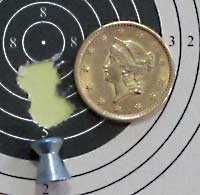 Next to be tried were five Qiang Yuan Match pellets. The 110 put them into a group that measures 0.281-inches between centers. Isn’t it interesting that going from one Chinese pellet to another by the same manufacturer makes such a difference? And I wasn’t tiring out. Not yet, anyhow. 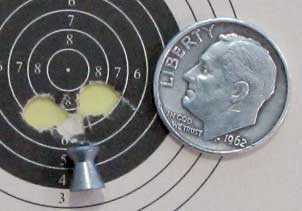 Next I tried some RWS Hobby pellets. Sometimes Hobbys can be surprisingly accurate and this was one of those times. Five went into 0.161-inches at 10 meters. It’s the second-smallest group of today’s test, and it also demonstrates that BB wasn’t getting tired on that last target. 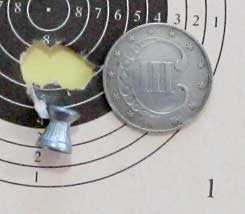 The last pellet I tested was the H&N Match Green. Last time Sig Match Ballistic Alloy pellets didn’t do so well, but I also had wanted to try these. So, today was the day. The FWB put five of them into a 0.192-inch group that is worthy of the trime.

Back to the R10 Match Heavy

I shot a final group of RWS R10 Match Heavy pellets, just to cap off the test. Every shot was held perfectly, but when I saw the group I knew my shooting was over. Five pellets went into 0.525-inches at 10 meters. 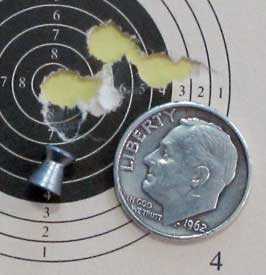 The FWB 110 is proving to be quite accurate, though not as accurate as my FWB 300S. I think after I reseal and tune it I’ll test the velocity again and then see if the accuracy changes. After that I’m thinking of pitting this rifle against all my other recoiling target rifles. That should be an interesting series of its own!