This report published on Saturday and I had to take it down. I believe the problem this time was me. I think I forgot that there was a weekend and just scheduled the blog for the next day. We are back on track now and this will be a four-day week for BB, who will take this Friday off as his Christmas holiday.

Today we begin our long look at the Air Venturi Avenger Bullpup. It’s a precharged pneumatic repeater with a sidelever, a user-adjustable regulator, user-adjustable power, a fully shrouded and baffled barrel, dual gauges — one for fill pressure and the other for the regulator and I’m going to stop there. If I went on to tell you every feature this rifle has I would be writing most of this report in the introduction.

Bullpup is the name given to a certain kind of short rifle where the barrel length isn’t sacrificed as much to make it carbine-length. Instead, the buttstock is shortened dramatically. Sometimes that makes for a rifle with a very short length of pull (distance between the butt and trigger) that turns the shooter into a “ship-in-a-bottle” marksman. The EDgun Lelya 2.0 is an example of that. Remember the toothpick crossbows?

Well, the Avenger bullpup isn’t that way. Yes, the buttstock is short, but the layout of the rest of the rifle makes it feel larger than its overall length of 33 inches implies. The barrel, alone, is 22-inches, so little power is lost. The pull is a man-sized 14-3/4-inches. I will tell you right now that BB Pelletier isn’t a fan of bullpups, but when he first hefted the Avenger bullpup it changed his mind. This one feels right to me!

This air rifle has features upon features that aren’t found on PCPs costing four times as much. “Quick, BB, tell us — does it have a single-shot tray?”

Why, yes it does. It comes from the box with the single-shot tray installed and one of the two magazines they give you is stored in the compartment under the butt. The other one is inside the box, just so you can get some practice inserting it into its storage place in the butt.

There is also an adjustable cheekpiece, but unlike any you’ve ever seen. This one slides straight back!

The Avenger bullpup cheekpiece slides back.

Why would you want that? Well, the design of the rifle already puts your head up high for the scope. This sliding cheek rest probably allows you to position your head more comfortably. I’ll have to play with it to find out.

The specs said there is an adjustable buttpad, but I didn’t see any place to insert the Allen wrench. That’s because it doesn’t need one! Simply pull the spring-loaded pad straight back and then move it up or down to suit yourself. The range is limited but in concert with the adjustable cheek rest you should be able to find something you’ll like. 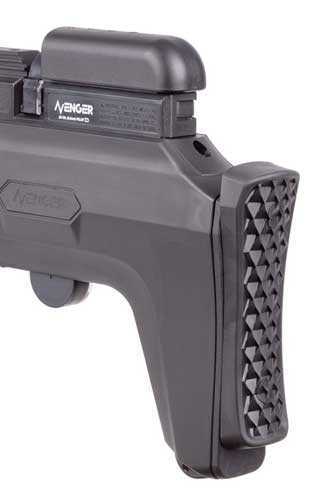 The buttpad is up. 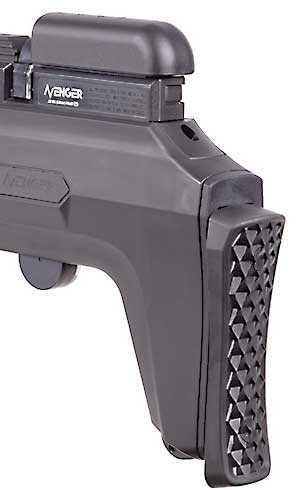 The buttpad is down.

The trigger is often one of any bullpup’s weak points. Typically a long linkage is required to mate the trigger blade that is considerably forward with the sear that remains in the back. Since the pull on this rifle is 14-3/4-inches it’s a full adult size and then some! That distance can cause the trigger to have slop and jerky movements — creep, if you will. “So, tell us, BB, how is this trigger?” I will tell you — in Part 2. And stop your whining! Pookey, pookey. Do I have a surprise coming for you!

I will tell you that the Avenger trigger is adjustable. And that is all I’m gonna say.

Does it really have a sidelever? Yes, it does. The bullpup design puts the lever that cocks the rifle by your right cheek, but the Avenger isn’t that hard to cock, so the lever’s placement isn’t a problem. 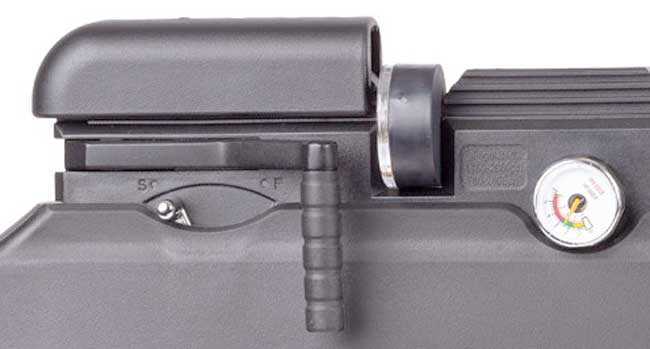 Yessir — that’s a sidelever all right.

At this time the Avenger Bullpup, like the full-sized rifle, is just made for right-handed shooters. The stock and trigger are ambidextrous but the lever can’t be moved to the other side of the receiver. However, that isn’t as big a problem as you might think. The sidelever cocks so easily that a Lefty probably won’t mind it.

How many shots in the magazine?

There are no open sights so a scope base is provided. It’s a Picatinny rail that stands proud of the barrel jacket more than an inch. I can tell just by looking at it with the butt on my shoulder that any good scope is going to line up with my sighting eye.

I want to mount a nice scope on this rifle! My new Meopta 4-20 is scheduled for the TX 200 Mark III when I get it back into action, but I have some other nice scopes to choose from.

I have done some things with this rifle that I haven’t told you about today, because this is an Avenger. The last Avenger I tested I almost bought because it was so nice. That one was a .22 and if I didn’t already own an Air Arms S510XS I would have bought the Avenger. If this one tests out, I will have to say that Avengers are the best value on the market.

Oh, I am biting my tongue to keep from spilling the beans! I wanna talk!

Besides my surprise that won’t come until Part 2 there is a second Avenger surprise coming your way this week. Oh, boy! And (note to self) it’s gonna have to happen soon because old BB Pelletier is taking this Friday, December 24, off for Christmas, as a part of his four annual holidays.

Time passes and things do change. Costs go up, so BB is adjusting the threshold for a PPP up from just under $300 to just under $350. It doesn’t matter that much in the grand scheme of things, but I want you guys to know where I’m coming from when I make pronouncements. That puts the Avenger in a synthetic stock into the PPP category, with this bullpup just a little higher.

Is it too early to proclaim a winner? I suppose if this bullpup just won’t group or if it only gets 12 shots per fill I will have to say something, but this is an Avenger and I have high hopes