Today we test the velocity of the new Webley Mark VI CO2 Pellet Revolver with the 2-1/2-inch barrel. The factory claims 380 f.p.s., but with that short barrel I doubted it. Today we’re going to find out.

The first pellet I tested was the 7-grain RWS Hobby. If any lead pellet is going to go 380 f.p.s., this would probably be the one. Since the revolver works in both single action and double action I fired six pellets in each mode. In the single action mode the Hobby averaged 396 f.p.s. The low was 392 and the high was 403 f.p.s. That’s a difference of 11 f.p.s. — not too shabby. And shut my mouth — this revolver gets even more than the advertised 380 f.p.s.!

In the double action mode the revolver averaged 397 f.p.s. with Hobby pellets. The low was 392 and the high was 406 f.p.s. Single action and double action are about the same.

This suggestion was sent in by a reader for a different revolver but it works even better with this one. Break the revolver open slowly and the cartridges will not pop completely out. When they fall back down they are easy to load. 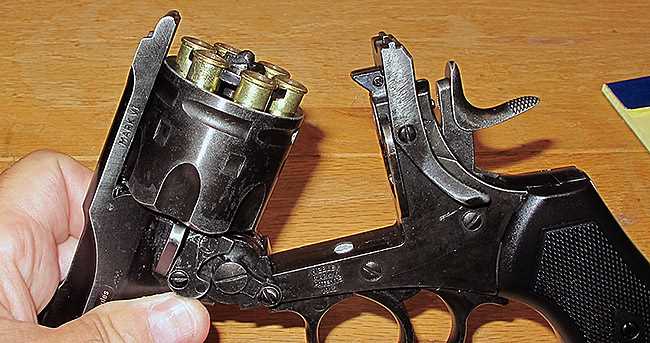 If you break the revolver open slowly the cartridges do not pop all the way out.

When the cartridges drop back down they are easy to load.

The next pellet I tested was the Air Arms 8.44-grain dome. I tested it the same way — six in single action and six in double action. In the single action mode they averaged 370 f.p.s The low was 360 and the high was 377 f.p.s. for a difference of 17 f.p.s. For such a short barrel this revolver has great power!

The last pellet I tested was the 5.25-grain Sig Match Ballistic Alloy wadcutter. Now, these pellets are much lighter and we expect them to go faster than the stated average. And they did! In the single action mode they averaged 457 f.p.s. with a low of 451 and a high of 464 f.p.s. That’s a spread of 13 f.p.s.

Now, how many shots will we get? Given how fast these shots were going from such a short barrel I expected around 50 shots. So I went back to Hobby pellets and here are the results.

I stopped at this point. I could tell from the discharge around shot 60 that the gas pressure was getting lower. I think any shooter will be able to discern this. Were there even more shots? Probably a few, but you risk sticking a pellet in the barrel if the gas suddenly gives out. Fortunately because of how this revolver breaks open it will be easy to clear.

This revolver is quite smooth shooting. The double action trigger pull doesn’t seem to move the barrel sideways the way some DA triggers do. However I did feel the trigger pull through some slack as the cylinder advanced, and then it became slightly heavier. With practice I believe I could work double action as well as single action. I’ll try some of that in the accuracy test.

The single action mode is very crisp. There may be some creep but it’s not that much.

In the single action mode the trigger breaks at 3 pounds 13 ounces. In double action the pull goes to 10 pounds, even. That might sound heavy but believe me, for a double action revolver it’s not. People pay a lot of money to get their firearm revolvers tuned to shoot this well!

We have a good one here. If a Webley Mark VI revolver has ever been on your radar I think this is one to consider. Accuracy comes next.