Today I shoot the Seneca Dragonfly Mark 2 multi-pump rifle another time at 25 yards using the UTG Reflex Micro Dot sight. It’s been a long time and I wanted to test the rifle once more with different pellets to see how potentially accurate it is. I said I was going to mount a scope for this test, but that still lies in our future.

I shot the Dragonfly Mark 2 off a sandbag rest at 25 yards. I shot five shots per group with one exception and I pumped the rifle eight times per shot. You will remember that the Dragonfly Mark 2 has a scissors pump linkage that reduces the effort to pump. It can accept up to 15 pump strokes per shot, though at eight strokes I learned in Part 2 that the velocity got up pretty close to the max. For me that seems like the best bang for the buck.

Things happened as the test progressed and I will report them as they occurred. Let’s get started.

The first pellet I shot was one I was especially interested in — the Baracuda Match with a 5.53mm head from H&N. I was interested because in Part 8 I tried the same pellet with a 5.51mm head. Would that small difference matter? It seemed to, as the first 5 pellets went into a group that measures 0.549-inches between centers at 25 yards. When I’m shooting with a dot sight that is a good group!

So I shot a second group of five shots with this same pellet to see if the first group was a fluke. And now I have to tell you that the trigger was not functioning as it should. I could pull it all the way and the rifle wouldn’t fire. Then on the next pull it fired unexpectedly. Remember that I adjusted it in Part 8. Well, I got it adjusted a little too fine and sometimes it would not fire. But I persevered and shot all five shots. This time, though, the group was much larger and also horizontal, which I attribute to the trigger issue. Five shots went into 1.183-inches at 25 meters. Now for most multi-pumps that would be about right, but I believe this Dragonfly Mark 2 is capable of better. 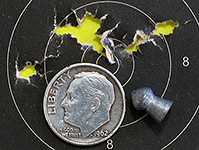 The second group of Baracuda Match pellets went into a horizontal 1.183-inch group at 25 yards.

The next pellet I tried was the RWS Superdome. They loaded very hard, as though the bolt had to push them past a restriction at the breech. And the first shot took a lot of time because I squeezed the trigger repeatedly before the rifle fired. The pellet hit the nine ring of the target, but I was unprepared for the shot, so it was time to do something about the trigger.

Thankfully I took good pictures when I adjusted the trigger in Part 8 and I also wrote good notes about the trigger disassembly. Because of that I was able to adjust the trigger in five minutes this time. But to do it the barreled action had to be be outside the stock. That could throw off the sight a little.

The second Superdome I fired landed in the 5-ring at 10 o’clock, and I decided to shoot another 4 shots to see where the group went. Well, the Superdome is not the right pellet for the Dragonfly. My five shots went into an open group sized 1.084-inches between centers. I’m not including the first shot that hit farthest to the right. I’m also not going to adjust the scope because I think this pellet is way off for this rifle. 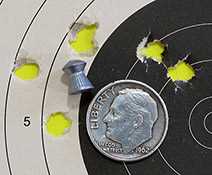 The Dragonfly put five RWS Superdomes into a 1.084-inch group at 25 yards. The shot farthest on the right doesn’t count.

Now that the trigger is operating well I looked forward to the last group. I adjusted the illuminated dot in the sight to a lower level so it appeared smaller in the window. I knew the trigger would fire the rifle every time now. Let’s see what we get.

The Baracuda Hunter Extreme is a hollowpoint pellet that I haven’t shot a lot. So this was a twofer. The Dragonfly Mark 2 put five of these into a 0.63-inch group at 25 yards. And look at the group. It’s really three in one hole and two in another. This is an accurate pellet in the Dragonfly. Now I can’t wait to see what will happen with the scope.

In these ten reports we have all learned a lot about the Seneca Dragonfly Mark 2 multi-pump rifle. Wives, I’m sorry for what I am about to do. Readers — this air rifle is a watershed air rifle and an heirloom air rifle. This is your chance to snag a Sheridan Supergrade in the 21st century. I don’t wanna hear what you shoulda done! Do what you gotta do to get at least one of these beauties. Ralphie would be proud!

Because it pumps easily and is also quite accurate I think the Dragonfly Mark 2 might be the best new air rifle of the century. If the Sig ASP20 was still around the Dragonfly would share the podium, but it’s here and that one isn’t.