Today’s report is the first accuracy test of the Gamo Arrow. Reader ErikDK can smile, because this one turns out fine!

Today is a direct follow-on from yesterday’s discussion of how to test a new rifle for accuracy. You will see that I followed that pattern to completion.

I’m searching for accurate pellets for the Arrow, so I will shoot 5-shot groups. That allows me to test more pellets. I’m shooting from 10 meters with the rifle rested directly on a sandbag. I’m using the open sights that come on the rifle today. Because the rotary magazine holds 10 pellets I load five of one kind and then five of the next kind. One thing I did not do was pull the rifle into my shoulder as Tyler Patner recommends on his video of testing the Arrow.

Instead of sighting in I decided to just shoot groups and adjust the rear sight as I went. That saves time and pellets. This will be a long test so those things are important to me.

I read all the past reports on the rifle before starting the test. Here we go!

Five RWS Hobbys went into a group that measures 1.783-inches between centers at 10 meters. Yuck! This is obviously not a pellet for the Arrow. 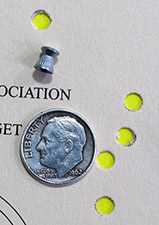 Following this group I adjusted the rear sight down and to the left — a lot!

The next pellet tested was the H&N Baracuda Match with a 4.52 mm head. Five went into 0.261-inches between centers at 10 meters. Now that is what I hoped for!

The Arrow put five H&N Baracuda Match with 4.52 mm heads into 0.261-inches, center-to-center. Given that I’m shooting with open sights, this is a great group and this pellet wins a try at 25 yards. I’ll have more to say about this in a bit.

After this group I adjusted the rear sight down a little and to the right a little.

Next up were Air Arms 8.44-grain domes. Five of them at 10 meters went into a 0.781-inch group, but four are in 0.378-inches. I think the low shot that’s by itself was an aiming error and the four shots are more representative of what this pellet can do at 10 meters. It wins a possible place in the 25 yard test, depending on how the rest of the pellets do. 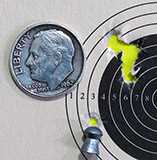 After this group I adjusted the rear sight down two clicks and to the right just a little. This was the last sight adjustment I made today.

This is a test of a similar pellet (to the Baracuda Match with 4.52 mm heads in the second group), but with a different head size. As reader, Jerry Cupples, the inventor and retailer of the Pelletgage, has taught us, pellet head sizes do matter. This Baracuda with its 4.50 mm head performed significantly differently than the Baracuda Match, putting five pellets into an open 0.728-inch group at 10 meters.

Next to be tried were five H&N Field Target pellets with a 4.50 mm head. These were so difficult to push into the magazine that I had to get a pusher. They then “popped” in. Five of them went into an open group that measures 0.6-inches between centers at 10 meters.

Three times in today’s test the bolt blew open and the rifle sounded much louder. This also happened in the  velocity test. I’m therefore telling you to make certain that the bolt is locked closed every time. Strangely it doesn’t seem to affect accuracy at this distance.

The sixth pellet I tried was the JSB Exact RS. Five of them made a very open 0.908-inch group at 10 meters.

By this point in the test I had tested the accuracy of 6 pellets. Two of them look good enough for a second try at 25 yards. Is there a third one?

For my seventh pellet I shot five RWS Superdomes into a 0.306-inch group at 10 meters. That’s good enough to make the 25-yard list. Now there are three. Or are there?

The Gamo Arrow put five RWS Superdome pellets into a nice round group measuring 0.306-inches between centers at 10 meters. It joins the list for 25 yards.

I wanted to confirm that the most accurate pellet we have seen so far — the H&N Baracuda Match with 4.52 mm head — is really that accurate. Even though I had shot the Arrow 30 times by this point, I was going to give that pellet one more try.

Erik — I think I have found THE pellet for the Arrow. And good news for you — it’s a pellet that should be available in Europe. I will try all three of the pellets I mentioned earlier at 25 yards with the open sights and then I will scope the rifle and shoot at 25 yards again. But I believe we now know the score. The Gamo Arrow PCP is an accurate air rifle. Erik — you did well.

Today’s test is a close companion and a follow-on to yesterday’s discussion on what and how to test when you are testing a new air rifle. I am doing this for you with both the Crosman Fire breakbarrel and with this Gamo Arrow.

Please take note that I shot this whole test with open sights. Rather than to invent the reasons for why the RWS Hobby pellet are spread out vertically in the first group, just accept that they are and move on. The Baracuda Match pellets with 4.52 mm heads make everything right. That is why I shot a second group of them.

The Arrow is quite picky about the pellets it likes. Therefore test many pellets and test them my way and you’ll soon find some favorites.

I said in the summary to Part 2 that I really liked the Arrow. Today we see that it is shaping up quite well in all ways that are important. It’s a winner and we still have more tests to go. 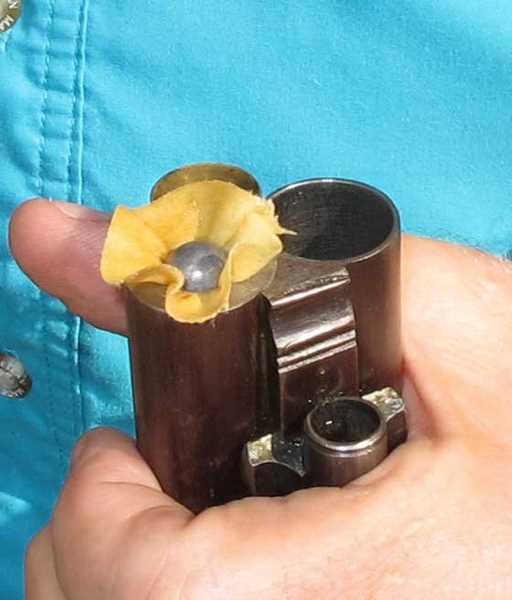