Today we look at the accuracy of the .177-caliber Seneca Dragonfly Mark 2 multi-pump air rifle at 10 meters. Remember that in Part Two I told you this is not the only accuracy test I will do at 10 meters with open sights. I hope you will see the reasons for that today, though the velocity variance of 85 f.p.s. that we saw on the 5-pump test in Part 2 was a good reason to start with.

I shot the rifle from 10 meters with the rifle rested directly on a sandbag. I shot with the open sights that came with the rifle and for this test I wore my prescription glasses — not my reading glasses with +1.25 diopter correction. I would use those glasses to see the front sight more clearly, but since I also watched the Labradar chronograph, I wore the prescription glasses. This is another big reason I want to give the rifle a second chance at 10 meters.

All of today’s tests were shot with Crosman Premiers that weigh 10.5-grains. I shot different numbers of pellets in each group. I’ll tell you what they are as we go.

First test — not on target

Usually when I get a rifle with open sights it’s pretty close to sighted-in when it comes from the box. But not this time. The shots weren’t even on the paper at 10 meters until I cranked the rear sight up quite a bit.

The first group of five shots from the .177-caliber Dragonfly was shots with 3 through 7 pump strokes. The top two holes are from three and four pumps. The bottom three pellets are from pumps five through seven. The group measures 0.613-inches between centers.

The second target was with shots that had 8 through 15 pumps behind them. That’s a total of eight shots. Oddly enough this group isn’t that bad. It measures 0.451-inches between centers and looks fairly rounded.  The velocities for each shot were:

This second group was shot with 8 through 15 pump strokes on the rifle. That’s a total of 8 shots. It measures 0.451-inches between centers and isn’t that bad for open sights at 10 meters.

I note, though, that there was a lot less variance in velocity in this shot string than in the first one, despite there being three more shots. The first string/group varied by 145 f.p.s. The second one varied by 54 f.p.s.

Okay, that wasn’t much of an accuracy test; I will give you that. But do you see how nice and round the second group is? I believe the Dragonfly is trying to talk to us.

The velocity variations between shots should start to settle down when we get some shots on the rifle. They are already starting to become more normal.

Perhaps what I should do now is test the .22-caliber Dragonfly velocity again, to see if it has changed since I retested it in Part 5 of that 15-part series. I can count the number of shots that were fired both before and since that test, which would give us a good idea of how many shots a Dragonfly break-in takes. We could then estimate how many shots it will take to break this .177 rifle in. It’s just a thought, but isn’t that the sort of thing we all want to know? This rifle is significant and deserves a closer look than some Chinese-made breakbarrel that might not be around two years from now.

On this test I fired 10 shots with five pump strokes per shot. This was the test where the velocity of all the shots varied by 85 f.p.s. and I made such a fuss about it in Part 2.

Ten shots at 10 meters with five pump strokes per shot made a group that measures 0.682-inches between centers. If the one stray shot wasn’t there I would say that the group (of 9 shots) that measures 0.403-inches between centers isn’t bad, but the stray shot is there and there was no called pull. Once again this is a call for those reading glasses that allow me to focus sharply on the front sight. 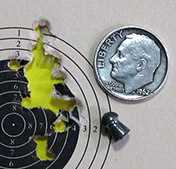 Not much to learn from this group except that, as the pumps increase, the pellets move either up or down on the target. This is 13 shots in 1.121-inches at 10 meters.

We have learned a lot about this .177-caliber Seneca Dragonfly Mark 2. In Part 2 we learned that, like the .22-caliber Dragonfly, this one needs a break-in period. In fact, because of testing both Dragonflys we may learn a lot more about the rifle than if we had only tested one.

I believe that today’s tests show an indication of the accuracy potential of this .177. If that holds true, then this series of airguns can be viewed as accurate. And that is something multi-pump fans long for — that and power, which the Dragonfly certainly seems to have. And, because it is the easiest pumping multi-pump on the market, it can be scoped. That can only help with accuracy.