I’m sure you have heard the phrase, “Think outside the box.” Many organizations don’t really want their people to do that. The organization just wants their employees to enlarge the box a little, but to continue to respect the time-honored principals that got the organization to where it is today.

But there are exceptions. In engineering there is an annual Sol Rosenthal Award for the creative idea that best advances its technology that year. Unlike many awards, there is only one caveat to this one. A prototype of the idea must be implemented, so it can be compared to an existing reality that can be measured. read more

AlanL has previously commented that light pellets might be more efficient and was wondering about things like drag. He specifically mentioned using aluminum for pellets. I thought I would take today and do a short report on some projectile weight changes that have been made and had major impacts over the years. 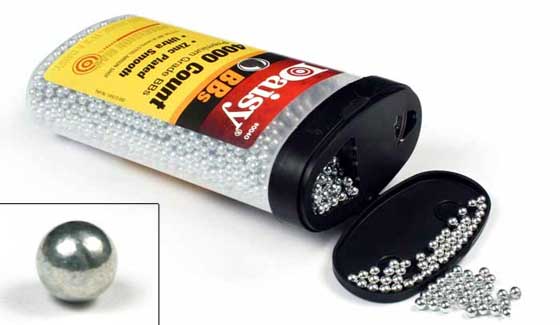 The first caliber BB gun was actually shotgun shot-size BB. That’s supposed to be a round lead ball 0.180 inches in diameter. Early BB guns shot this because the shot was readily available, and owners didn’t have to make any special provisions to get it. Every hardware store carried shotgun shot.

When the 20th century dawned, the Daisy company decided to lighten their lead shot, so they down-sized it to 0.175 inches. This reduced the amount of lead that went into each projectile. It doesn’t sound like a lot, but the savings are great when you’re selling millions and billions of shot. The benefits were that the new shot flew faster in given guns. Of course, being smaller, it didn’t work in the older guns; so different size shot tubes for Daisy’s private-branded Air Rifle Shot had to be fabricated for new guns.

Fast-forwarding to the 1920s, Daisy began to get returns of their BB guns with shot stuck in the tubes. When they looked at the problem, most of these were coming from the Minneapolis area. They went there and discovered that kids were going to the scrap piles behind the American Ball Company and picking out round steel balls that would fit in their BB guns. They gauged the shot by dropping it down the muzzle to see if it stuck in the shot tube. This new type of shot worked well, but it wasn’t suited for the shot tube, which was designed for lead. Daisy saw another savings opportunity, though, and they contracted with American Ball to produce Bullseye Air Rifle Shot. We’re now into the 1930s, and Daisy guns are shooting what we see today — traditional steel BBs. They went even faster than the older lead shot, but they didn’t shoot quite as true. The shot size was now nominally 0.173 inches. Daisy was able to reduce the power of the springs in their guns, making them easier to cock and producing an overall better product.

=&0=&
WWII caused shortages of materials that halted production of BB guns for the duration. When the war was over, critical supplies — such as steel plate — were still in shortage and hard to come by. So, the BB gun industry took several years to ramp up into production. Since steel was such a critical item, Daisy experimented with aluminum shot. This is where today’s story plays out, AlanL. Aluminum shot was very, very fast and had absolutely no accuracy whatsoever. Daisy had discovered the threshold beyond which you cannot lighten the projectile. So, they went back to steel, and we’ve been there ever since.

=&1=&
For more proof that lightweight projectiles are less accurate, you only need to look at the world of airsoft. An airsoft BB of 0.12 grams is often selected for smaller, less expensive airsoft guns because it flies very fast. But, when put in a potentially more accurate gun, they cannot be controlled and usually fly erratically. Airsoft snipers have learned this and understand the importance of balancing the weight of the ammo with the gun.

=&2=&
You’ll notice that there are some optimum pellet weights. If you look at what’s available for sale, you’ll find that many of the pellets are clustered within a central weight range. When you go too heavy, they become clumsy and inaccurate. When you go too light, they become erratic and inaccurate. For long-range shooting, you want a heavier projectile and a more powerful powerplant that’s suited to that projectile weight.