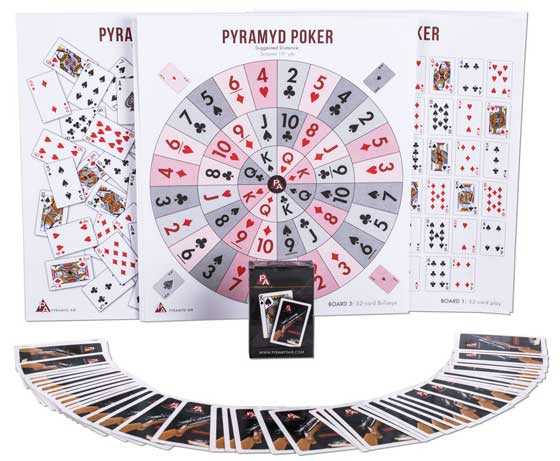 Okay — I know you readers are all clever guys (and a few gals), and I know many of you are tightwads, just ike me. So, the idea of buying a paper target game would never fly — except for one thing. I read every comment made on this blog, and fully a third of them deal with targets in some way. As airgunners you are obsessed with things to shoot at, [REB]!

When Pyramyd Air first sent me the Pyramyd Air Poker Game set of games, I thought they were lame. But then I read the directions to the seven different games in this package and learned otherwise. They aren’t lame as long as you are a good shot. Or, to state that another way, maybe I was lame for thinking these are lame. In this package of 15 paper targets are at least seven good games that can be played with a pellet rifle. Some are games of skill and some are games of luck. You can vary the distance at which you place the targets, so the difficulty is entirely up to you. It can be a relaxing game for your children or a cutthroat game of marksmanship between two determined marksmen. Also included in the set is one deck of cards. It’s a standard deck, so they can be used conventionally for card games, but they are really there to help with the scoring. When shooters hit a card on the target they are given that card to keep track of their progress. There is only one of each card in the deck, so a second hit on the same card counts as a miss in my book. read more