Another gentleman will be bringing some nice collectible Red Ryders. I’ll be there with Mac and am planning on bringing my 1860s gallery dart gun and perhaps one or two other beauties that you’ve read about in this blog. Mac will have several vintage 10-meter rifles to sell.

One more bit of good news before we begin. I thought I’d asked Mac to return the .177 caliber RWS Diana 350 Feuerkraft air rifle without retesting the accuracy with a good scope, but as it turns out, I hadn’t. So, Mac is doing that accuracy test and there will be a Part 4 to that report as initially promised.

I must say that I’ve been eagerly awaiting this test. The 12-inch barrel on the Gamo PT-85 Blowback Tactical air pistol just begs to be shot for both velocity and accuracy. Today’s the day for velocity. Let’s get going.

Powering up
The first step was to install a CO2 cartridge. I found it easy to do except that the winding stem is in a tight space and a little hard to grab. I think those with large hands will notice this. And, of course, I put a drop of Crosman Pellgunoil on the tip of the cartridge to keep the gun sealed for a long time. I fired one shot to know that the cartridge was pierced successfully, and the blowback surprised me. I’d forgotten that feature, but it feels very realistic, which means it feels just like the recoil of a .22 rimfire pistol.

RWS Hobbys
The first pellets tested were RWS Hobbys. They averaged 532 f.p.s. and the spread went from 510 to 565 f.p.s., but the decrease in speed was nearly linear from start to finish. I’ll have more to say about that in a bit. At the average velocity, the gun generated 4.4 foot-pounds.

Gamo Raptors
Of course, I had to test Gamo Raptors in this air pistol! They averaged 544 f.p.s., with a spread from 529 to 567 f.p.s. Once more, the velocity decreased with almost every shot. At the average velocity, Raptors generated 3.55 foot-pounds.

Crosman Premier 7.9-grain domes
The next pellet tested was the 7.9-grain Crosman Premier. They averaged 480 f.p.s., with a spread that went from 459 up to 499 f.p.s. As before, the velocity decreased with almost every shot. At the average velocity, the energy was 4.04 foot-pounds.

By this point, I could see that the velocity was dropping off in a linear fashion with every 8-shot clip. But the gun was not yet finished firing powerful shots. It was acting like the impression everybody has of a CO2 gun, but of course they don’t really work that way. Only this one was working exactly that way — velocity dropping throughout the power band.

After the Premiers, which took me to 24 total shots, I fired another magazine of Hobbys. This time the average was 487 f.p.s., with a declining spread from 499 to 472 f.p.s. Then I shot another clip of Hobbys, which averaged 479 f.p.s. That spread went from 501 down to 451. Clearly, the CO2 cartridge was on its last legs. The next group of Hobbys fired averaged 394 f.p.s., and that was the last clip I fired. The spread went from 437 down to 341 f.p.s. The gun was now running on residual gas; and if I’d continued, I risked jamming a pellet in the barrel.

Total shots per cartridge
I calculate the total number of reasonable shots as 48. If you’re going after target accuracy, I recommend stopping after the fifth clip, which would bring the total down to 40 shots. Though that’s a small number, it’s much larger than what you get with a Magnum Research Desert Eagle pistol, which has lower velocity and also has blowback action. By the way, the blowback did function reliably throughout this test. That’s the extra gas conservation a 12-inch barrel gets you.

Observations
At this point, I can make two observations. First, loading the 16-shot magazine takes longer for this pistol than it would if the two circular clips came out. They have to be rotated chamber by chamber to load each pellet and that takes time. And, second, the trigger is strange. The stage-two pull has a huge spot of relaxed pull before tightening up again. It’s almost a three-stage trigger, which doesn’t exist.

On the single-action versus double-action power potential, I decided not to test it because of the blowback feature. After the initial shot, all the follow-on shots will be single-action because the slide has cocked the hammer, so that’s how I tested the gun. I doubt that anyone will lower the hammer every time after firing, just so they can keep shooting double-action.

Based on the performance we see here, I’ll probably shoot 40 shots at 10 meters for the accuracy test.

The Gamo PT-85 Blowback Tactical air pistol is a different air pistol in several ways that I will describe to you today. For starters, the most dramatic difference that strikes me is this pistol has a 12-inch barrel! You read that correctly, a 12-inch barrel. So, when Gamo makes the claim of being the fastest CO2 pellet pistol around, they have done their homework to make it so. The extra-long barrel means additional “burn” time to the gas, which is really extra acceleration time in the barrel. Carbon dioxide is a relatively sluggish gas that needs a longer time to act on the base of the pellet because of its lower pressure. With just 850 psi at 70 degrees F, it has about one-half or less the pressure of air found in a precharged pneumatic gun, plus the large CO2 molecule moves more slowly through the valve than the much smaller atoms found in air. In recent testing reported on the internet, a barrel length of 16 inches was found to be about optimum for CO2, as far as terminal velocity is concerned. That was with the valve in the gun that was being tested, but the valve in the PT85 pistol is certainly in the same class.

Putting a 12-inch barrel in a CO2 pistol is a great way to maximize the muzzle velocity. They conceal it beneath a fake silencer. Remove the silencer, and about seven inches of unfinished steel barrel protrude from the muzzle.

Yes, there really is a 12-inch barrel concealed by the fake silencer.

The second remarkable feature of this pistol is that there’s a front sight under the wraparound Picatinny quad rail. Not that one in 10 owners will ever use it, but it’s there. It has the mandatory dot to align with the two on the rear sight. These are tactical sights, and you use them by aligning all three dots while placing the center dot on the desired point of impact. You can do that with the fake silencer in place, so in effect, you get two different pistols when you buy this one. One has a quad rail and a tactical flashlight, laser and a dot sight with red, green and blue dots of varying illumination intensities. Why they left out the bayonet is beyond me. 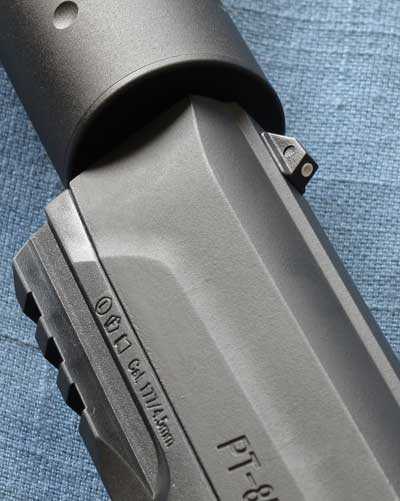 Here’s a sight you never see. The front sight of the pistol, visible only when the quad rail is removed. It can be used with the fake silencer installed.

The other pistol configuration is without the quad rail, using the conventional open sights. So the owner has a choice of just how much bling to bring to the fling.

The third major feature is one I’ve seen before, but not often. The magazine that fits into the grip is double-ended and each end contains an 8-round circular clip. You have 16 rounds on hand when the gun is fully loaded. All you have to do is remove the clip and flip it to the other end to get the final 8 shots. 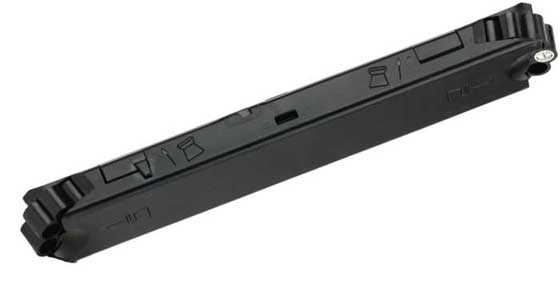 A double-ended stick magazine holds eight pellets in each end.

The owner’s manual
Gamo promises 560 f.p.s. for this pistol. Although the too-brief owner’s manual remains silent on the subject, the cover of the box explains that this is done with Gamo Platinum PBA .177 pellets, of which they’ve included 50 with the gun.

I’ll test the pistol for both velocity and accuracy with PBA pellets and lead pellets. With a 12-inch barrel, I expect to see remarkable velocities with both types.

I’m going to blast the thin owner’s manual of this pistol for several weaknesses and errors. First, in the “How to install the CO2 cartridge” section in the manual there are too few words and none that help. They do not show how the grip is separated to access the loading area. So I’ll tell you. Just grasp the lower portion of plastic grip in one hand while holding the pistol in the other. The pull is straight apart and very hard, because there’s a locking tab at the top of the smaller part to be overcome. 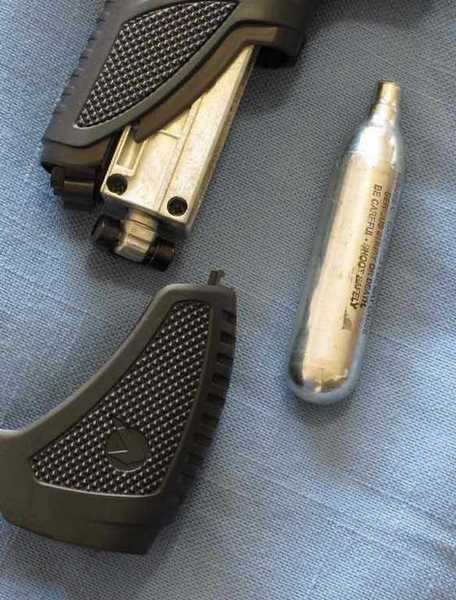 Pull the small plastic bottom part away from the grip. It’s hard to remove because a tab holds it in place.

The section on how to load pellets is similarly thin and graphic-oriented. These graphics are also weak. If you can’t figure out how to load the magazine, don’t look to the owner’s manual for help. Let me show you. 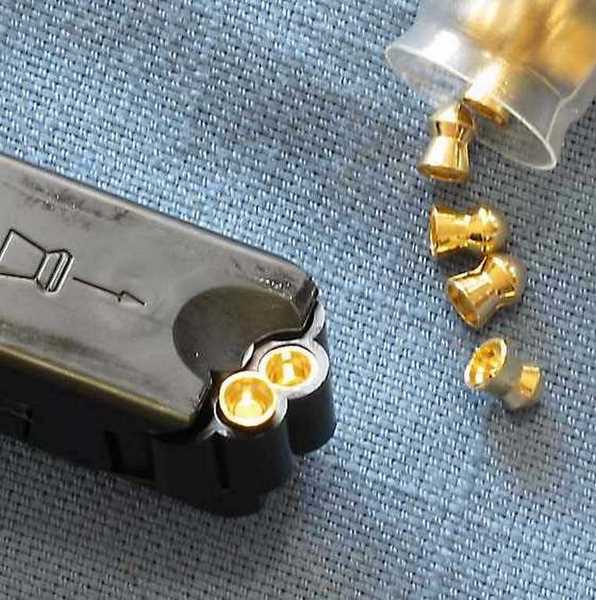 On either end of the stick magazine, there’s a circular 8-shot clip. Push in pellets from the back side until they’re flush with the cylinder.

General description
The Gamo PT-85 Blowback Tactical air pistol is both a single- and double-action handgun. The weight is given as 2.32 lbs. but with all the different accessories and pistol configurations, that will change as the gun does.

The finish is matte black, and your hand touches plastic almost exclusively. Only the trigger, slide and silencer are metal. The double-ended magazine is plastic, too.

First impression
I think this pistol will be received very well by younger shooters, because it embodies the design features that have come to be expected in a modern tactical sidearm. And the accessories are over the top at the price.

Personally, I hope the gun is accurate and as powerful as advertised.