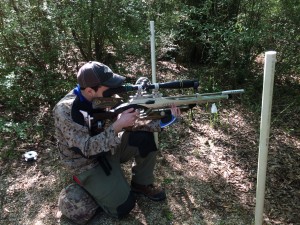 Tyler and his Steyr LG110 on the kneeling lane!

The Cajun Spring Classic was held on March 27th through the 29th in Baton Rouge, Louisiana.  The match is steeped in tradition and is the longest running field target match in the country.  The match has been hosted by the Bayou Airgun Club for over 20 years now and is a must-attend match for newcomers and veterans alike.  This was my second year attending the match and I was very excited to shake off the winter blues and kick off the season!  My trip began from Cleveland, Ohio very early on Friday morning the 27th.  After getting my rifle checked and ok’d by the TSA, I boarded the plane and we were off.  I had a brief layover in Charlotte, North Carolina before getting on my flight to Baton Rouge.  Sadly, I missed my connection and was forced to wait for the next flight which was about 7 hours later. 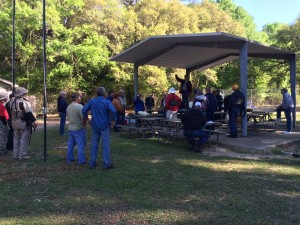 After finally arriving in Baton Rouge, I met up with some fellow shooters for dinner where they informed me of the days events at the range.  Fridays are set up and sight in days at Grand Prix matches like the Cajuns.  Shooters can come in and make sure their guns are zeroed and ready to shoot for Saturday’s first match.  Grand Prix matches are regional and national matches that count toward your overall class rankings for the year.  Each Grand Prix must consist of at least 100 shots and last for two days or more.  The problem for me was that coming off of a flight can leave your gun a bit out of whack, but I resolved to wake up early Saturday morning and make sure my rifle was good to go. 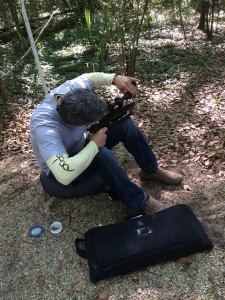 Paul shooting the Crosman 1720T that he customized and shared with Tyler for the PFT match!

I arrived at the range at 7:30 AM Saturday morning and got my rifle put together and began shooting.  Luckily, it held it’s zero through the flight and the velocity was not too far off normal.  After a slight tweak or two, I was settled in and ready to shoot.  Paul Plauche (match director) called the shooters meeting and went over rules and safety before we headed out to the course.

Paul and I were squadded together as we both shoot WFTF (12 FPE) Class.  Paul is an excellent shooter and even tied for second place at last years World Field Target Championship in New Zealand.  It’s always a great opportunity to shoot with really good shooters as it gives you someone to pace off of and also someone you can learn from.  After the first lane, things were looking good as both Paul and I cleared the lane.  Our next lane was the standing lane which is always a tough one.  After making my first three shots, I managed to pull the last shot just right of the kill zone.  On the next lane, things took a turn for the worst.  As I was adjusting my elevation turret on my scope, I noticed that the clicks were not audible and I could not feel them.  This meant my turret was loose.  I tightened it down but then found that the spring inside of the turret was binding and I had lost my zero.  Needless to say, my day was all but over.  I went through the remainder of the match trying to use my first shot as a sighter and hold off accordingly for the second shot.  I managed to pull off a score of 36/60.  Paul stayed rock solid and shot an impressive 55/60. 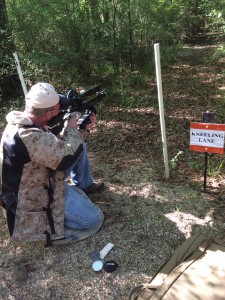 After the rifle match was the pistol match.  Pistol field target is relatively new and something I have tried a few times.  Paul was nice enough to let me shoot with him again and use his Crosman 1720T pistol. 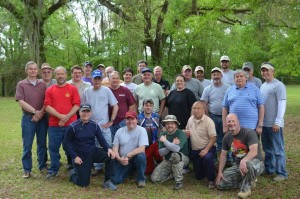 We ended the day tied with scores of 34.  Mike Vredenburg from Texas also shot a 34.  This meant a shoot off!  We each had one shot at what looked like a 3/4″ target at 32 yards or so.  35 yards is the max distance for pistol FT and this was a challenging shot.  Mike shot first and was unsuccessful.  I sat down, took a quick guess at the wind, and held just outside of the kill zone.  The pellet found its mark as the target fell with authority!  Paul shot after me and didn’t find the mark, which meant I was the winner.  It was my first PFT win and all with a borrowed gun!  Great shooting to both Paul and Mike.  I may just have to purchase a 1720T for these matches in the future.  All in all, Saturday turned out pretty good for me.  In Hunter pistol, Bob Dye took top honors with a 36/40, just one point over Ron Robinson.  It was a tight match!  I was disappointed in the rifle results but had a great time none the less and the pistol win softened the blow of the morning’s misgivings. 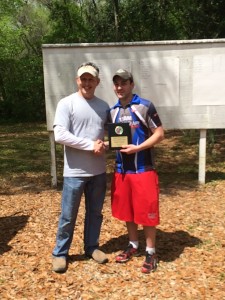 After the match, a few shooters helped me fix my scope and make sure my gun was re-zeroed.  Nothing can replace experience in this game and those more experienced are always willing to help others in any way they can.  My good friend Ken Hughes was kind enough to help me figure out what was going on and fix it.  A big THANK YOU Ken!  I owe you one! 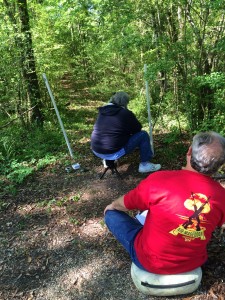 Sundays at field target matches are generally a bit more intense.  It’s game time, as the match can be won or lost on Sunday.  I was already out of the running, but I wanted to make sure my scope was working better.  After verifying a few things on the sight in range, the match started.  I shot with Robert Ray from TN.  Robert is one of the nicest guys you could meet and a great shooter.  He had been having some troubles with his Steyr LG100 rifle and he didn’t score as well as he could have, but we had a great time!  The rifle and scope performed much better than Saturday and I finished with a 51.  Day two’s course was a bit tougher with more long range shots (45 yards or more) and it is a bit more open which lets the wind play with your pellet in flight. 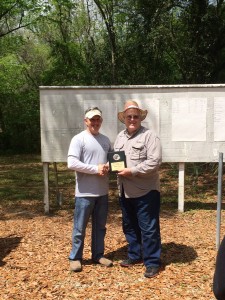 In WFTF, with only 12 FPE to work with, wind is everything!  The better you can read the wind and correct accordingly, the better you will do.  When all was said and done, Paul Plauche came in first with a 111 overall for the WFTF title and overall match high score.

David Alsup and Ken Hughes came in just a few points behind him for second and third place.  In Open PCP, Mike Vredenburg took the took top honors shooting a 109 with Rob Seiden and FT legend Roz Sumpter just points behind. 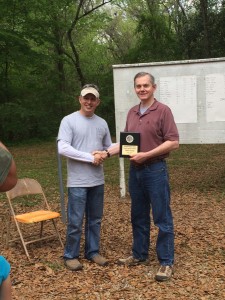 In Hunter, a familiar face made it to the winner circle as Charles Garvey took top honors shooting a modified FWB P70 to take the title.  Bob Dye shot just one point behind Charles and turned in an impressive 108 for second.

At the end of the match, awards were presented and everyone said their goodbyes.  It’s always tough saying goodbye to your friends, but the best part about FT is that if all goes according to plan, you get to see them again at the next one!

A few observations about the match.  This was the first match I have been to where there was no piston class!  Of course, we can attribute this to the ease of shooting a PCP and their growing popularity. But at a match with as much history as the Cajun’s, I expected more piston shooters to make it out.  I know there are some who would normally have made it, but life gets in the way, and you can bet they will be out next year in full force!  The food this year, was off-the-charts good!  The gumbo and red beans were easily the best I have ever had and I know everyone left with full bellies and happy hearts.  While field target is a shooting sport, and many of us do consider ourselves to be fierce competitors, the game is really about the camaraderie and friendships you build.  While it’s important to note that I go to shoot, I really go to shoot with my friends!  Without friends and your fellow shooters, the game would be no fun and no one would want to play.  Most shooters will tell you that they get interested because of the guns and the shooting, but stay for the people.  I have never met such a great group of people, and many of them are folks I consider some of my best friends.  No matter when or where we saw each other last, things pick up like no time has passed at all!  This type of experience is truly represented by the Cajun Classic.  A match that has stood the test of time just as many friendships have!  Two of my favorite people to see at FT matches are David Slade and Alan Otsuka, both are well known shooters and have been going to Cajun’s since before I knew what an air rifle was (Alan has never missed the match and David is not far behind)!  The two are the best of friends and the banter that gets thrown around is legendary when these two meet up at FT matches!  That speaks volumes about the game, the people and the challenge of Field Target.  After all, if it was not difficult, there would be no reason to keep coming back!  Then again, with food like you get at the Cajuns…I’d be willing to bet most would come back just to eat!

Until next time, shoot safe and see you on the lanes! 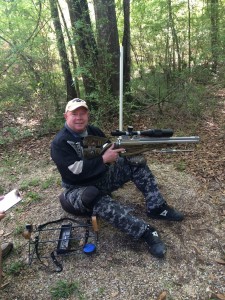 Stylie Edwards and his
Ripley AR5.
What a gorgeous gun! 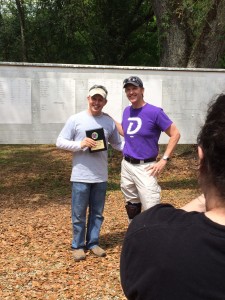 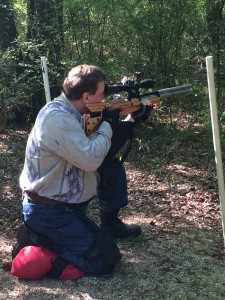 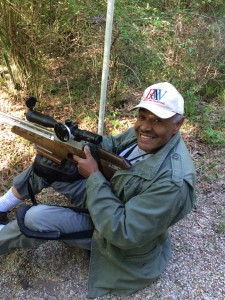 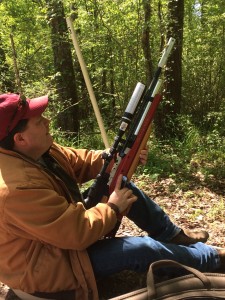 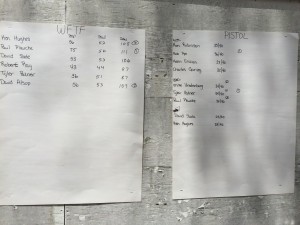 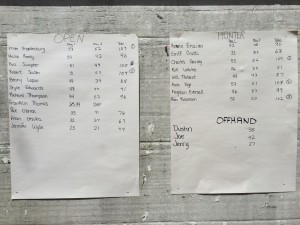