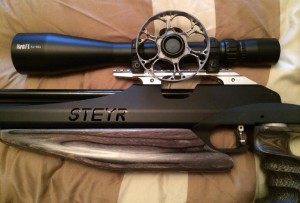 I packed rain gear and planned to shoot at least part of the 2015 Crosman All American Field Target Championship in the wet, but the weather held until just before the awards ceremony. The course was set in the open field, with lanes immediately adjacent to one another. It was good to not have to carry things for miles (which we have literally done in some WFTF venues including Italy and Germany), because that can make physical endurance a major factor. Targets were all on the flat with the main challenge being the tricky breeze on the far targets. It was generally from behind and slightly right or left. The trick was to determine which of the 3. There were some
nice smaller and closer KZ’s in contrast to years past, when all KZ’s were full size. Some of the small ones made you “pucker” a bit. 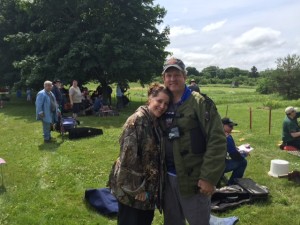 Harold and his wife Leigh.

On day one I was squaded with Joe McDaniel and Harold Rushton. This was good for me, as Joe was my lane partner in 2003 when I was fortunate to win the open title at Nationals. Joe is a good, experienced shooter and a real gentleman to shoot with. Harold is a good friend, one of the world’s best airgun shooters, and also a great gentleman.

I started out by cleaning the first 12 lanes or so, then we got to the middle section that had the longer targets. That’s when the intermittent breezes kicked in. Missed one, then a lane later missed 2 and then 2 again. All were right on the edge-too much hold off, not enough hold off, and just out. Generally my advice would be to hold off less than you think you need to, but I didn’t take my own advice. (“Take my advice, I’m not using it”). At that point I knew I was out of it, so I just enjoyed the company and the shooting. 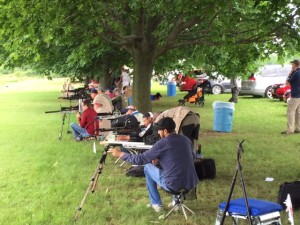 Everyone setting up on the line.

Went out to dinner with some fine people, Harold and his wife Tarrow, Tyler Patner, Jeff Paddock, and Paul Cray and his girlfriend Allex. Also with us was Kristen Coss, marketing manager at Pyramid air, she’s a fun gal and really patient with all the Field Target talk.

Day 2 had me paired with Tom Holland, a fine shooter and the pellet-testing guru. One of the most humorous moments of the weekend was when Paul Cray asked Tom what he does to his pellets! Tyler Patner and I just glanced at each other and sort of wondered off, knowing that Paul was going to get the entire procedure, which is probably just shy of the intricacy of a moon landing. We returned a half hour later and they were still going! Don’t ask if you don’t want the whole answer! Seriously though if you want to really know all the things you can do to your pellets and how exactly to do those things, Tom is the guy to talk to! 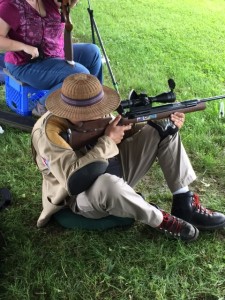 Shooting on day two was similar to day one, except the “cold line” call got me. When I was just ready to shoot at a touchy close target, the call “cold line” rang out. I discharged my gun and set it down. Trouble is, by the time I picked it up, reloaded and reestablished my point of aim, my extra 15 seconds for the cold line was long gone. I ended up rushing the second target due to time and missed both. My other 2 misses came on a stander where the breeze was blowing me a bit. It added just enough wobble for me to drop 2. I dropped one other target for the same score I had day one. I actually was not that disappointed with my total, just wasn’t good enough to win. Harold and Jeff shot so well on day one that the results were pretty much decided right there. They went neck and neck until Harold’s final shot. Jeff is a top notch shooter and it was good to see him put 2 really good days together for the win. We would like to see him do some WFTF travel, he would represent the U.S.A. very well.

For me, the highlights of the shoot were seeing and hanging with many of my field target friends. Crosman has a winner meet going and I plan to attend many more.