The Nevada State Field Target Match is held in a rocky canyon about 20 miles outside of Battle Mountain Nevada. This was the third year that it has been held but it was my first time attending. It’s an out-of-the-way-destination but turned out to be well worth the time. I drove a couple hundred miles south to meet up with John Knapp in Quartz Hill, California. I was looking forward to the drive up through the Owen’s Valley in eastern California. I’ve lived in California all of my life and had never been north of Death Valley on the Eastern route. I was looking forward to seeing some new territory. 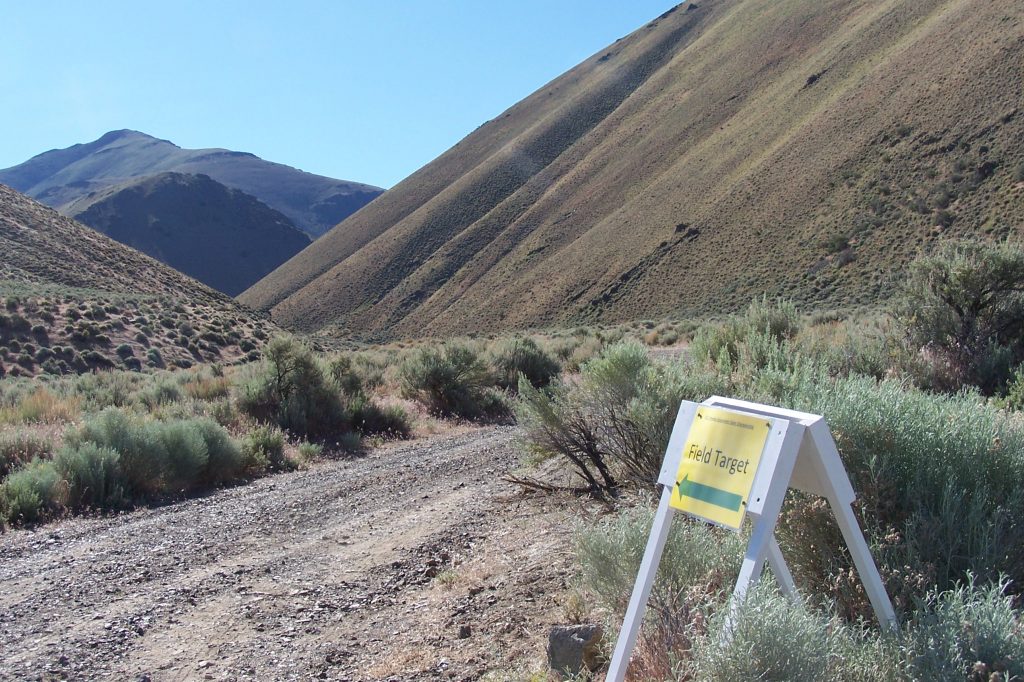 The turn off into the match location. Welcome to Battle Mountain!

After surveying the course and camp sites, John and I headed into Battle Mountain as we decided against roughing it for the weekend. We got a room at the fanciest Motel in town, The Big Chief.

Friday morning was overcast and cool – welcome conditions compared to the heat that I was expecting. The pistol match was on the “Pink” pistol course. I had been shooting the AA heavies in my 12fpe pistol at recent matches. That’s not a problem on the short 35 yard pistol course. Since the pistol was going to double as a carbine for the rifle match, I decided to switch to some lighter pellets in order to flatten the trajectory. The H&N 8.5gr Sniper Mediums have been doing well in my piston gun and also seemed to shoot OK in my pistol. This would be the first use of that combination at a match. I was squaded with Cameron Kerndt who had a new AirMax pistol and shot the match in the yoga position which was also new for him. He did very well considering a new gun and new shooting position. The gun behaved well but I struggled with the high inclined offhand shots and missed all four. I ended up with 30/40. Randy Ebersole won Hunter pistol with at great 33/40. Riz Marques won Limited pistol with a 32/40 followed right behind by Bill Corder with 31/40. 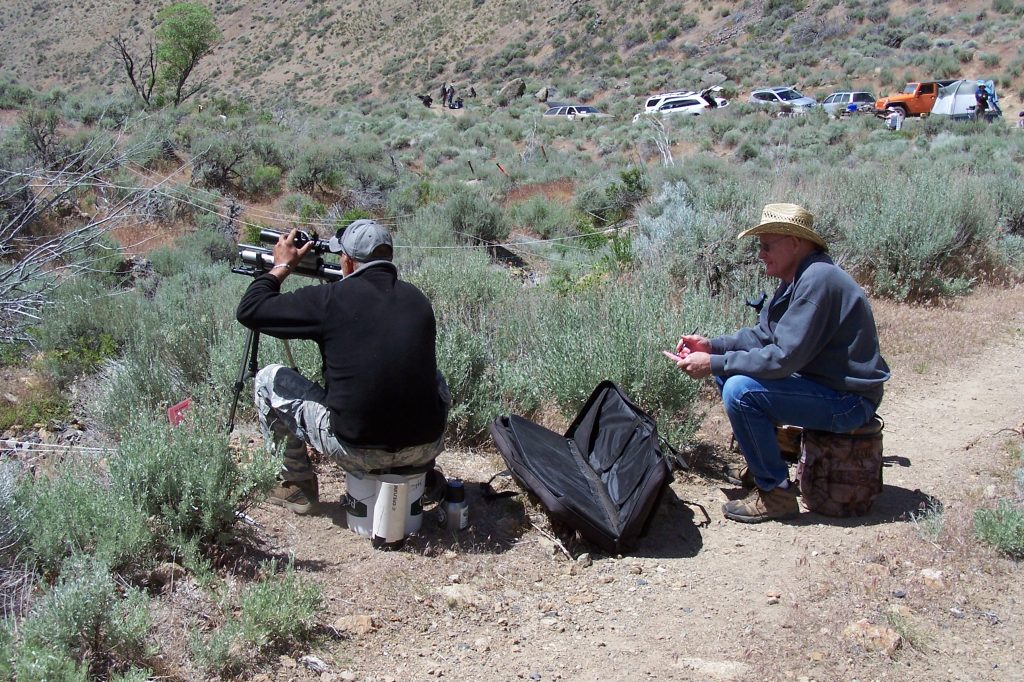 Randy Ebersole on the pistol course

Match director Lonnie Smith was on crutches from a recent injury, but kept the grill going after the matches. A steady flow or burgers, BBQ chicken, hot dogs and sausages at the match director camp. I heard there were tacos both nights down at the main camp. 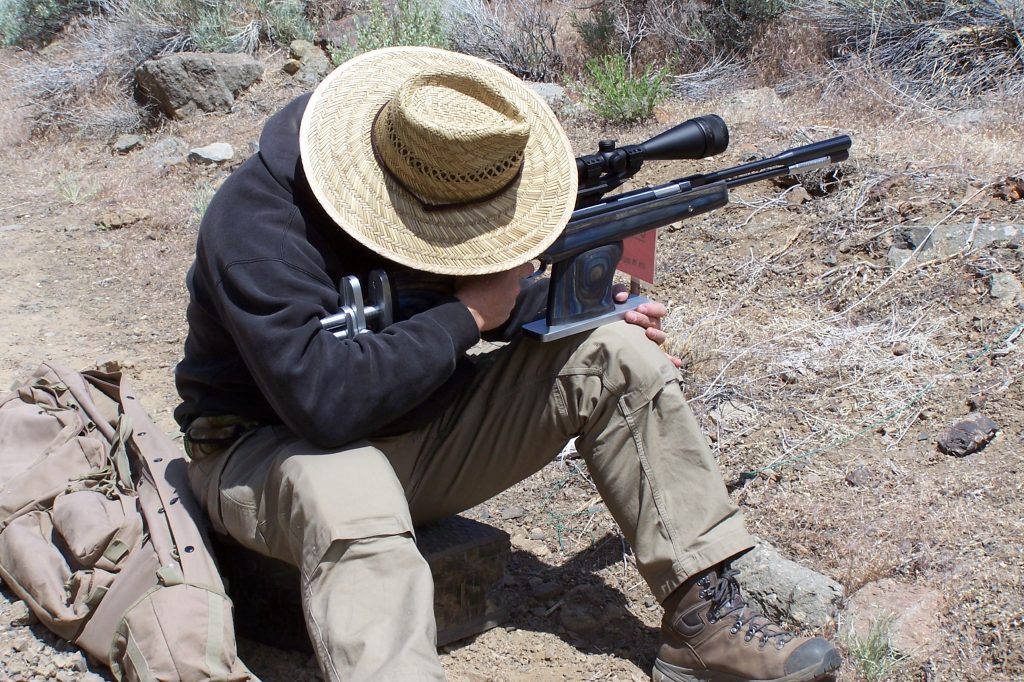 Match Director Lonnie Smith took Top Piston honors along with being the head chef for the weekend.

It was windier but a little warmer for Saturday’s rifle match. I was on the Red course with lots of long uphill shots. Al Padilla was my squad partner. I missed a lot and ended with 35/56 for the day. Riz Marquez had the high score for the day with 45/56 on the Yellow course.

Back at the Big Chief, I got a goods nights sleep. I was well rested for the Sunday match but was almost dreading the day. My attitude improved after seeing that the winds were lighter than the day before, and I knew the Yellow course would have fewer of the very long shots. I stored my almost empty tin of older H&N Snipers and opened a fresh tin from a new batch. Those earlier batches of Sniper Mediums were somewhat inconsistent batch to batch. Maybe the newer batch would do better. At least I hoped so. I loaded up all my magazines, and accidentally dumped the rest of the tin in the dirt just as the shooter’s meeting was called. I told my self that I would pick them up later (but only if they shot well that day!). Les Niles was my squad partner for Sunday, shooting a Remington break barrel in Hunter Piston. I would guess that Les spent more time than anyone at the sight-in range. His Remington was not holding zero. By the end of the match, the rotating scope was obvious when looking at the canted reticle. The 4600ft altitude was not helping either. At the chronograph station Les’s Remington was down about 100fps from his expected velocity. He kept on shooting the match, hitting a single target every few lanes. He stuck it out and stayed positive. I ended the day with a 48/60 for the day, surprising myself as I hit 3/4 of the difficult offhand shots. 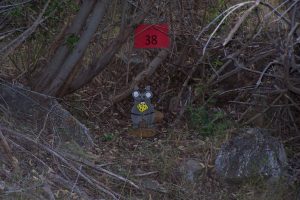 There’s a little tiny kill zone in the cheese that this rat is holding, a tough shot! 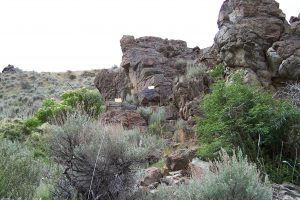 Some tricky elevated targets. You don’t find topography like this on many FT courses 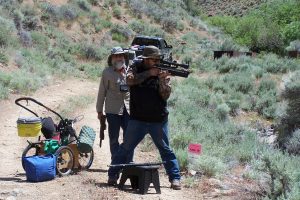 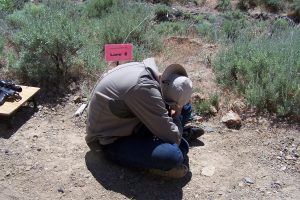 Cameron Kerndt trying out a new pistol and shooting position 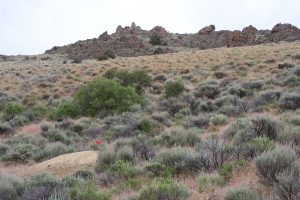 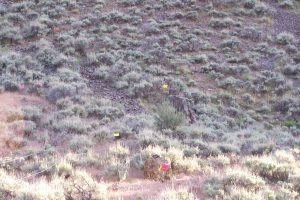 The Red and Yellow courses were interspersed without crossing. The hillside was dotted with target signs making it easy enough to locate the correct targets 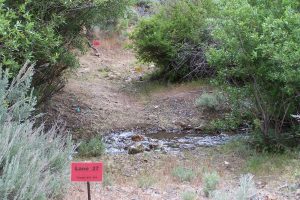 The Nevada State Match was a memorable experience. A good one for the adventurous types:
“B a t t l e M o u n t a i n – Are you tough enough?” 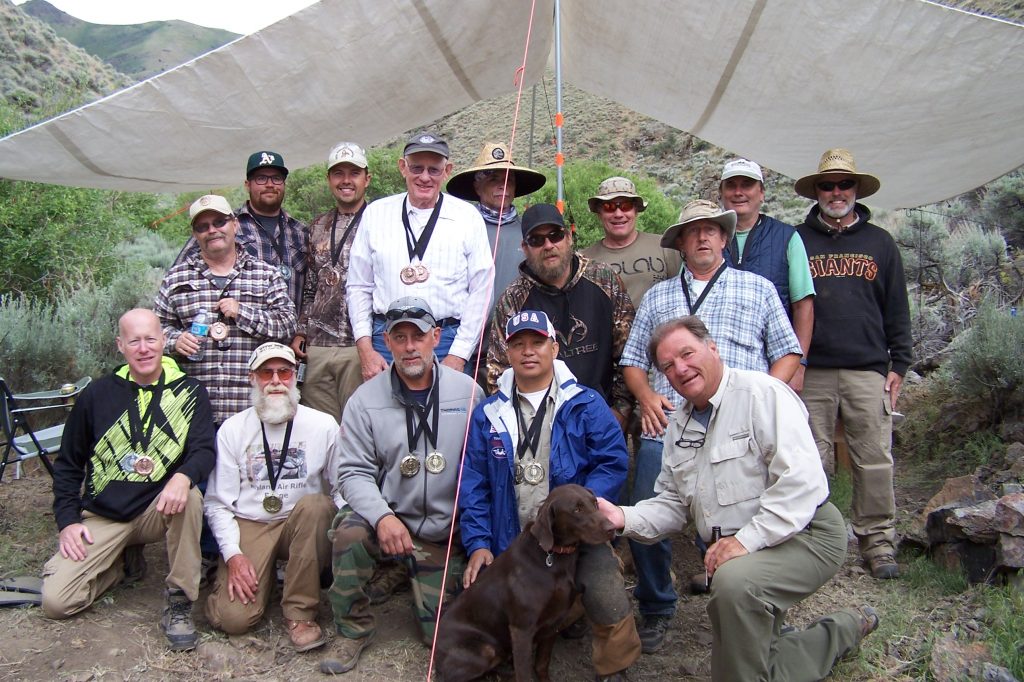