Airsoft guns have one of three powerplants - spring-piston, gas or automatic electric (abbreviated AEG, for automatic electric gun). An AEG is a spring-piston gun with a small motor that cocks the piston automatically. The gun has select-fire, which means it will fire both semiautomatically (one shot with each pull of the trigger) or fully automatic (gun fires when trigger is pulled and doesn't stop until trigger is released).

That small motor needs electric power, which it draws from a battery of some type stored out of sight on the gun. Inexpensive AEGs operate on common AA batteries. When the guns become more sophisticated, they use rechargable batteries.

Many AEGs that use rechargable batteries come with one battery pack and a charger, so the gun is complete. As the guns go up in price, however, sometimes they don't come with batteries, because owners may have very specific battery requirements and may wish to purchase the batteries separately. The guns are also less expensive if they don't include batteries and a charger.

Battery configurations (shapes)
Rechargable batteries are packaged in several different shapes, and an AEG may only have room for one shape, so it is important to know which shape your gun uses. When the individual cells are arranged in two columns, sometimes with one cell at the bottom of one single pack, they're commonly called "large" batteries. Don't use that as a buying guide! There is no standard for the term large, so you have to find out if the battery will fit your gun. 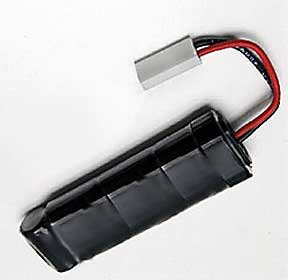 The large battery is most often used in the butts of large rifles, where there's a lot of room for storage. This type of rifle is the easiest to upgrade to larger batteries. 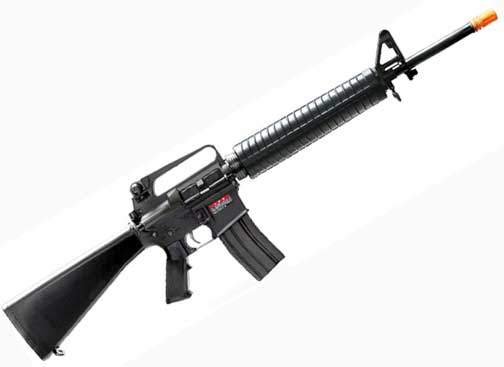 The large, hollow buttstock of the M16 has room for larger batteries.

Sometimes, the batteries come in two separate columns connected by wire. These are called nunchuk batteries, because of their resemblance to the martial arts weapon. They're commonly used when the batteries are stuffed inside the forearm of the AEG on either side of the barrel, such as inside the hollow forearm of an M4 carbine. 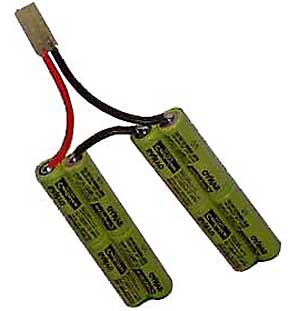 The nunchuck-style battery is split into two sections, joined by wire. It's most often stuffed on either side of the barrel inside a round handguard on an M4 carbine or similar-sized AEG. 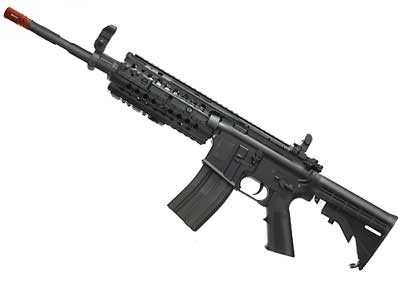 The M4's collapsible butt has no room for a battery, so the round handguard houses a nunchuck-type battery.

Other batteries have cells arranged in one long stick, hence the name stick battery. These also have specific models of guns they fit. 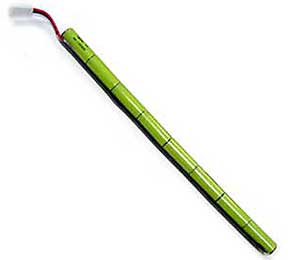 A stick battery looks just like it sounds. Most often used in the handguards of AK47s with folding stocks. 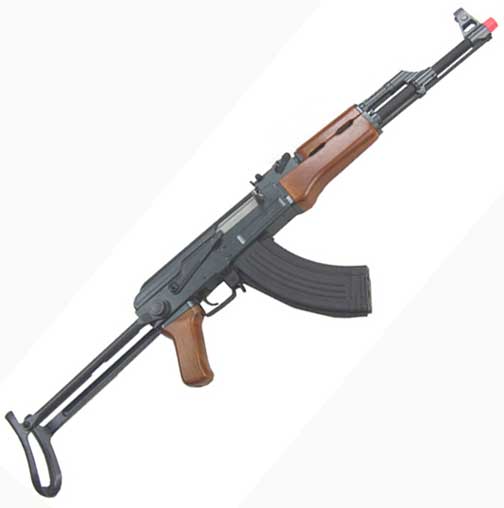 The folding stock has no room for the battery, so this AK47 hides a stick battery in the forearm.

When an AEG has very little space for the battery, you may have to use one constructed with smaller cells. A "small" battery will have the correct voltage for your gun, but will be limited on the amount of electricity, stated as milliamp hours (or mAH). Let's look at mAH ratings next.

You'll find batteries with mAH ratings from a low of 600 mAH to a high of 3000 mAH. Remember, the battery must fit into your battery box, so don't just select one based on capacity, alone. Remember that capacity and voltage are independent of each other.

So, if you have an AEG M4 carbine with a cyclic rate (number of rounds per minute the gun fires when in the full-auto mode) of 750 rounds per minute, a 9.6-volt battery might boost that RPM up to 850 or even 900. Sounds great, doesn't it? There's one big drawback. If your gun's gearbox is not rated to operate for sustained periods above 800 RPM, running it at 850 could break it in just a few minutes.

Higher-voltage batteries are for when guns have been upgraded with stronger gearboxes and more powerful mainsprings. Using them on an unmodified gun is risking damage to the gun.

The standard voltages available today are 8.4, 9.6 and 10.8. For super-modified guns with very strong gearboxes and heavy-duty powerplants, there's a 12-volt battery that's the highest in general use. Umarex offers some small airsoft guns that have proprietary 7.2-volt batteries.

Battery specifications - technology
What the battery is made of plays a huge part in how it works. Not so much in the kind of power it delivers, but in the number of charge cycles and the speed of the charge cycle.

Nickel cadmium
Years ago, the nickel cadmium (NiCd or NiCad, pronounced Nye Cad) battery was king, only because it was about the only rechargeable battery there was. This is the type of battery that many claim has a memory and will gradually take less and less of a charge until it no longer works. When you use them, you should discharge the battery all the way to nothing or you may lose a portion of its storage capacity, especially in AEGs. NiCd batteries charge very quickly; however, they generate heat when charging and must not be charged faster than recommended or they can explode. NiCd batteries discharge at the rate of 10-20 percent a month when not used.

Lithium-ion
Lithium-ion (Li-ion) batteries hold their charge for a very long time. They also recharge very quickly. They do not suffer from memory at all. They are not as durable as NiCd or NiMH batteries, and they suffer capacity loss from age, alone, which the other types do not.