A touch of the master...Ivan Hancock

by Tom Gaylord
Exclusively for PyramydAir.com. Copyright © 2007. All Rights Reserved.

They call it the "baby Patriot," in reference to Webley's monster 30-foot-pound springer. But, where the Patriot is big, heavy and takes lots of muscle to cock, the Tomahawk is svelte and easy on the arm. Plus, it’s a delight to look at!

The Tomahawk comes from the bench of Webley custom designer Ivan Hancock. Ivan operated the Venom company for many years, turning out some of the most innovative and expensive spring air rifles in the world. The Venom Mach I was a highly custom breakbarrel that was the first spring rifle to regularly exceed the sound barrier with lightweight .177 pellets. Besides that, it ushered in the famous Mach I trigger, which later became the Mach II.

A few years later, Ivan went to work on an underlever design at the request of U.S. enthusiast Trooper Walsh. Originally called the Wonderlever by Trooper, Ivan eventually created the famous Venom Mach II. That rifle led to the development of the TX200 and especially to the Pro Sport underlever rifles from Air Arms.

What does any of this have to do with the Tomahawk? Well, the Tomahawk has Ivan Hancock's hand all over it. Here is a spring rifle retailing under $400 with the features, styling and much of the quality of hand-built air rifles costing $2,000 and up. What it lacks is the superior grades of wood and the extensive hand checkering. Even there, Webley has found a way to put in a high percentage of the quality.

One specific example is the trigger, which is an example of what can be done when a Rekord trigger design is made by hand and modified to be extremely user-friendly. 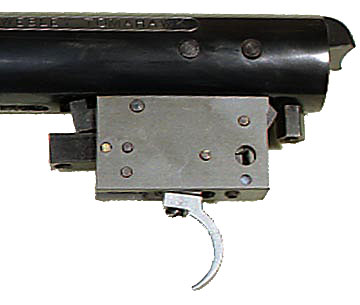 The Tomahawk trigger is a manufactured version of the handmade Venom Mach II trigger. It adjusts down to a crisp 2-lb. pull.

What Webley has done with the Tomahawk trigger is turn it into a design that can be manufactured, yet still retain much of the fine sensitivity and crispness of the Mach II. A new Mach II trigger sold for over $300 when they were still available, yet this entire RIFLE costs only $100 more! In my book, that’s worth mentioning!

The shooter can adjust the length of the first-stage pull and the length and weight of the second-stage pull. There is no trigger stop as of this writing, but here’s hoping the folks at Webley will find a way to incorporate one in the future.

The pull is as light as many would like. Two pounds seems to be the safe lower limit. But for hunters - and this is a hunting rifle, first and foremost - a 2-lb. pull is very light. During inclement weather, when freezing fingers loose their sensitivity, two crisp pounds are as little as you want. It may seem a bit heavy when shooting off the bench, but the Tomahawk was made to carried afield in search of game.

More Venom styling
Look closely at the shape and contour of the stock, and you can see Ivan’s influence. The forearm is fluted on both sides and there’s a subtle flat spot forward of the triggerguard for the off hand or to be used as a knee rest. The pistol grip is relatively vertical, which gives the shooting hand the best possible anchor. Note the characteristic slight flare at the bottom front of the grip. It doesn’t look like an electric guitar like some modern custom rifles - just a classic rifle stock.

The pistol grip is full and symetrical, for ambidextrous operation. An ever-so-slight palm swell fits the palm of either hand - yes, this is an ambidextrous stock with a cheekpiece on both sides.

The wood is finished to look almost as if there is no finish at all. Whatever Webley uses is very satin and transparent. This is a marked difference from the plastic-based finishes seen on most medium-priced spring guns today. It is more like what’s on the finest rifles coming from the top houses in the world. 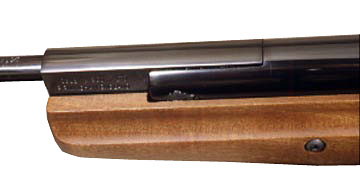 The top of the breech is level with the spring cylinder, a classic Hancock detail. Also, note the flutes in the forearm.

The Tomahawk not only looks good to the eye, it also feels good when you bring it to your shoulder. There's something very right about how the gun sits in your hands, and you'll just have to experience it for yourself. Every air rifle Ivan designs has the same feel, though the individual styling points may differ quite a lot.

Cocking is easy
The first thing you notice when preparing to shoot is the extreme ease of the cocking effort. It feels more like a 15 foot-pound gun than the 20 it actually is. Webley put in their trademark bank-vault detent breech lock, so you may have to slap the muzzle to open it. But, the cocking stroke is pure Venom! It cocks with an unbelievably light 33 lbs. of effort that remains constant throughout the barrel stroke. It would seem that Ivan knows a thing or two about spring powerplants. It’s definitely a rifle to keep away from the kitchen-table tinkerers. 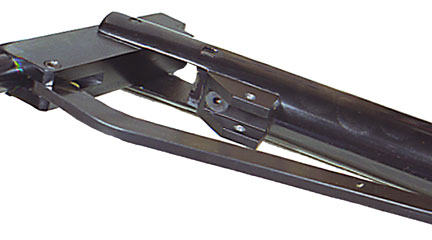 Important information
Check the tightness of what Webley calls the stock screw carriage screw. Keeping this screw secure is important to the smooth firing behavior and accuracy of your Tomahawk. Don’t over tighten the screw and strip the head or ruin your wrench - just be sure it's snug and remains so.

Let's shoot!
The Tomahawk is primarily a hunter’s rifle, so shooting off a bench isn’t the best way to sample it. I found it requires technique to group tight from the bench. The artillery hold is definitely needed for best results, and you do that like this: just rest the forearm on the open palm of your off hand - forget sandbags unless your palm is between them and the stock. Do not hold it tight anywhere; just allow it to float in your hands, and it will reward you with very good groups. The crisp trigger is a plus here.

Hunters will find the Tomahawk a very personal experience. They'll have to learn their rifle for best results, but this should prove to be one of those guns that gets better with practice. Start with a light hold and place the palm of the off hand forward, where you can feel the cocking slot. That’s what seems to give the tightest groups.

I tested the gun with Webley's Lazapell and Lazadome pellets. The Lazapells look a lot like Crosman Premiers, but they're made from what looks like pure lead and not the alloy Crosman uses. Though they were the lightest of the two at 14.4 grains, they fit the breech very tightly. The longer 15.8-grain Lazadomes fit much better and proved to be the best pellet in this test. Crosman Premiers were close behind, but they may need to be lubricated at this power level to keep from leading. 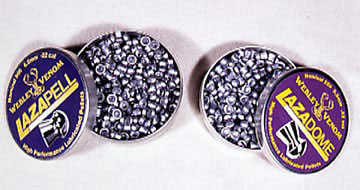 I used Webley Lazapells and Lazadomes to test our Tomahawk. The heavier Lazadomes fit the breech better and grouped best.

So there it is - 21 foot-pounds in a lightweight, easy-to-cock spring rifle with beautiful firing characteristics! What’s not to love?

Final thoughts
This is essentially a Venom air rifle at one-fourth the price or less. Think about that. There was a time when you couldn’t buy a Venom unless you spent around $2,000, give or take, and half of that had to be paid up front - before the guns were produced. Now you can buy a large part of that same technology for just a fraction of the price. While it would be incorrect to say the Tomahawk is truly hand-built rifle like the Venoms were, it contains so much of the same attributes as to allow shooters on a budget to own a piece of history.

FREE SHIPPING on orders $100 or more! LIMITED TIME ONLY!