After reading the superb write ups by Tyler and Matt, I concluded that they must have both taken an Ernest Hemmingway correspondence course!  I can’t add too much in regards to the great camaraderie, beautiful country, or difficulty of the courses but I’d like to relate my travel and shooting experiences from the trip and share some of the lessons I learned (or relearned).

Lesson one.  Do not travel alone.  If you can find someone to meet up with and co ordinate your flight to arrive at a similar time you will be much better off.  My wife was going to go with me, but was not feeling up to it, so I made my plans late when most others had things organized already.  It is much easier to drive in a foreign country with a navigator to watch the map and the turns.  It is enough for the driver just to watch traffic.  Its also nice to have someone to blame when you miss your exit or turn down a lane that becomes a goat path and leaves you in the middle of a field with sheep staring at you!  (this actually happened to me on another trip)  Knowing I would be going solo I booked my flight to Cardiff, Wales instead of to London.  The drive to the hotel would be shorter and Cardiff has a small airport.

I managed the drive to and from Cardiff alone, but it was white knuckles and very stressful.  The minor roads are all lined with 12 foot hedges with no shoulder and are very narrow.  Add to this that you are on the left side of the road and driving on the right side of the car and you’re likely to scrape some fauna.  My brush with the brush came as I was almost back to the airport for departure. My trusty iphone GPS took me down a narrow (one lane) hedge lined country road and when you met oncoming traffic one driver had to find one of the little “wide spots” they intermittently had in the road.  I had been lucky and the oncoming drivers had been pulling off in these little areas so I was able to pass.  My luck ended on that final road.  A UPS size van was coming at me and 5 cars were behind me.  The van had nowhere to pull over, so I found reverse and starting backing up.  Unfortunately, backing up is not high on my skill set and I soon found myself halfway engaged in a hedge.  This required me to pull forward again, almost touching the van’s bumper.  As I lurched back I saw the cars behind me trying to stay out of my way.  I finally got back far enough that the van found a little bump out to go around me.  I was sweating a bit.

Another 200 yards or so I came out on a highway and obeyed the GPS command to turn left.  Trouble is the GPS lady then said turn right, but I was in the LEFT lane.  Fortunately there was a stop there.  I waved at the truck in the right lane as I cut in front of him and he didn’t seem to want to do me bodily harm, in fact I believe he gestured that I was number 1!

Lesson two.  Plan to arrive well ahead of the competition.  Your body (and mind) need time to adjust.  When you fly to Wales you basically lose the night and when you arrive instead of going to bed (it’s midnight back home) you hop into a car and try to navigate (it’s 6 in the morning in Wales). I’ve heard you should figure on 1 day per hour of change to adapt.  If you’re older figure on longer to adjust.  I can just go to bed an hour late and feel out of it the next day.

Lesson three.  Find someone to stay with.  The trip will be more enjoyable if you have company, especially on the days before and after the event.  I was fortunate to share a converted barn with Pete and Sally Brooks and Ron and Muriel Carlson.  Some of the trip highlights were touring the old castle and Abby with them in the days before the shoot, going out for meals together and sharing leftovers at the barn. Following Sally Brooks to and from the shoot will be forever etched in my mind.  Brake light Sally!

Lesson four.  Practice using the target string to read the wind.  The best field target shooter in the world pulls the string up and watches it through his scope.  When he gets a “good” read he drops the string and quickly shoots.  The operative word here is quickly.  If you take very long to get the shot off the wind can change drastically.  This is the key to this technique.  I’ve been practicing it but cannot do it fast enough to use it yet.

Another string technique, used by my lane partners, is to pull and snap (suddenly release) the string.  You can watch how it moves on the snap, and you can watch the now loose string at the target.

Lesson five.  Use waterproof material for your windicator if you have to shoot in the rain.  Yarn, frayed string, and feathers are all bad in the wet and coincidentally they are what I had on hand!  I knew the feather would not work in the rain, but I have a frayed string that I thought would be OK.  However, when it got wet it hung there like a dead carp.  Matter of fact, a fish might have worked better.  I put the feather on for day 3 (wasn’t supposed to rain), it rained again.  Now I had a dead duck hanging from my gun.  In WFTF you cannot change attachments once you start.  Note to self, find something waterproof that moves in the wind, then practice with it!  A splice of VHS tape works for some.

Lesson six.  Set your rig up so that you do not need to refer to a range card.  This can be done by simply marking yardages on your elevation turret ( it helps to add an oversize turret).  The time you save can be points, it was for me.  I very carefully ranged a lane that had two of the closer targets (35-45 yards) , then fumbled a bit with my range card, followed by trying to wait out a small hurricane that was going through at the moment.  I ended up with a beep beep bang.  Timed out! To make matters worse I dropped the target which was now a zero.  The few seconds I could have saved with the yardage marked turret would have given me a point.  That translates to several places at Worlds.  There’s a reason that old AZ always set scopes up that way.

Lesson seven.  I shoot mostly in the woods, at tiny KZ’s.  This skill set had limited application in Wales.  It was about where you held, not how well. Practice in the windiest conditions you can, in an open field.

Try to change angles and shoot far left and right.  Particularly note how head/tail winds affect your POI.  A headwind from the right will blow you down more than from the left.  That is because a right to left wind blows you down and the headwind blows you down and you’re going down!  A head wind from the slight left will not blow down as much since the left to right factor tends to push the pellet up, while the headwind factor pushes down.  It tends to be a wash.  A similar thing seems to happen with a tail wind.  Left to right a bit will push you way up while a right to left will not change elevation much.

Here’s what I use;  Left to right wind = up a bit, Right to left wind = down a bit.  Tail wind = up, head wind = down.  Is it any wonder that a fishtailing head/tail wind is the toughest to shoot in?

Note:  Experiment and come to your own conclusions on the effects of the wind.  Most of the powder burner info says the opposite.

One of the biggest highlights of the trip from me was being there to see Ron Carlson receive the Sports Award for his contributions to Field Target.  It was an emotional moment and I’m glad his 2 grand daughters and wife could also be there.  Ron is one of the pioneers of our sport, a past World Champ, and USA Worlds host.  And, at 81, he still walked the courses and shot the 3 days!

In summary, I enjoyed the trip very much.  I had one day that I shot well (thank goodness half of one course was in the woods), had a grand time touring Wales with the Brooks and Carlsons, had incredible lane partners in Rich Wafta (Wales) and Steve  Franklin (England) and connected with many old friends from all over the World.

I hope some of my experiences proved useful or at least interesting.

Here are a few pics from the trip. 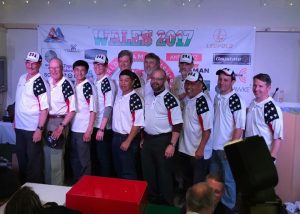 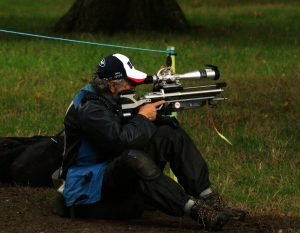 Greg with a limp feather 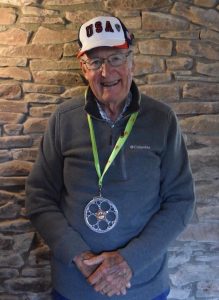 Ron Carlson with the Sports Award 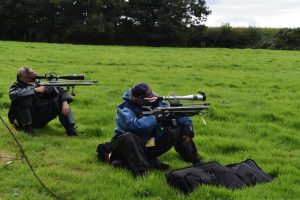 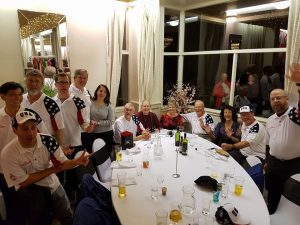 Most of the team at the banquet 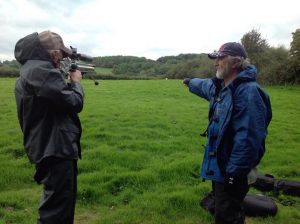 Practicing at the barn