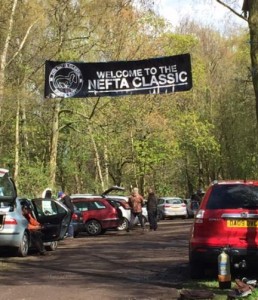 Welcome to the NEFTA Classic!

The NEFTA Classic is a yearly 2 day field target competition held at the Emley Moor FT Club in England. What makes it unique is that part of the shoot each day is 40 silhouettes, which are done standing with no gloves, slings, or jackets allowed. The silhouettes were brought to England from the U.S.A. in the early days of Field Target, when England and the U.S. alternately hosted a World Competition. The silhouette shoot is a timed event with 2 ½ minutes allowed for 5 targets. There is then a 1 minute rest and you shoot the next 5 etc. Silhouettes are standard (except for the legless chickens) 1/10th size sillys.

Having never shot 40 offhands in a row I had to gradually work my way up to 40 over the winter. Hector’s postal silhouette match was a great help and motivation in preparing, although shooting at paper from 10 meters is somewhat different from shooting the metal silhouettes outside! 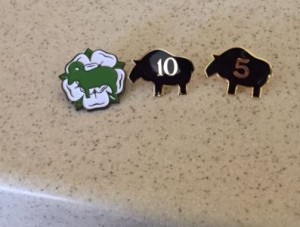 My pins for participation,10 straight, and 5 straight pigs

Here’s how the silhouette shed works; The scheduled group of 32 shooters waits outside the shed. The door opens and the first 4 shooters are called. They enter with their shooting partner, who is their scorer, and line up behind the chickens at 20 yards. The command to load is given, and 15 seconds later the command to start. 2 ½ minutes later cease fire is called and there is a 1 minute rest. This sequence is repeated and the chickens get blasted again. (You shoot each bank of 5 animals twice) On the rest command the shed door is opened and the next 4 shooters enter with their partner. I was in this group. Shooters enter during the 1minute rest, so you must get right in line and set up. I was surprised how quickly the command to load was given. The first group had moved down a notch to pigs at 30 yards. There were now 8 shooters in the shed. The shooting sequence repeats itself twice and the next group of 4 enters. Group 1 is now on the 36 yard Turkeys. There are now 12 shooters in the shed. Shooting sequence repeats twice and the final 4 are called in. There are now 16 shooters in the shed. Group 1 finishes with the 45 yard rams. 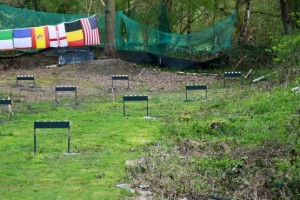 I finished below my goal of 30/40 Sillys per day. I hit 28 and 29. On day two I had a good start missing 3 chickens, then clearing 10 pigs. Unfortunately it got breezy half way through the rams. The very best silhouette shooters have been doing it for years and regularly shoot 80 to 100 in a row for practice. Sometimes hitting ALL of them. 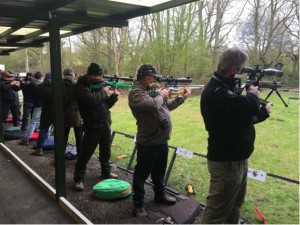 The first day of FT started out cool and sunny, so I left my raingear in the car. Wind was a fishtail headwind with a constant change of direction. Targets are usually placed to the far right and left from shooting box, so the wind is never a constant. The breeze was very tricky and targets were all full size kills, mostly 45-55 yards away. My partner, Mark Stanton, missed 5 of the first 8, and he is from the area. Then the wind picked up and the hail hit. Before I had a chance to think about it my scope was full of black water/hail dots. The next 10 shots were very tough to range. The hail only lasted about 15 min, but the damage was done. From now on I will always keep a cover handy for my eyepiece! You’d think I would have learned after last years US Nationals! Take my advice, I’m not using it.

The first days course was in sort of a figure 8 path so the wind was in your face for several lanes, then from the right, then from behind. Although I shot thousands of shots on paper over the winter, I had not shot an outside match in 5 months. Should have made the Cajuns! The Brits have Winter League, so they are really up on their game. I finished the first day with a somewhat disappointing 28/40. At least I wasn’t alone. Almost all of the overseas competitors struggled. The exception being Jose Redondo from Spain, but this was his 6th Classic.

It was obviously possible to hit most of the targets tho, as there were two 37’s and a 36 for the day. The Brits know the wind better than I had imagined, or even thought possible. But they have 3 FT clubs within a half hour of each other, all open every day. In addition there is a new 50 yard indoor range recently opened by Brian Sampson.

In the FT event I only held inside the KZ a few times, and that includes standing and kneeling shots. On the second day there was one 10 target stretch where I never held on the faceplate! Note the ladder in center, these targets were all high in the trees with 20-30mph wind, with bigger gusts. We sat on ridge above. I had to turn down to 20X so I could hold off and still see the target. 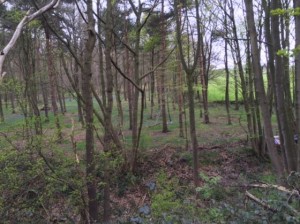 Day two started out pretty good. I figured out about a one KZ to the outside hold and only missed a couple on the first leg. Then we hit the standing lane pictured below, followed by the ridge shots pictured left. From 2 to 9 down in a flash. 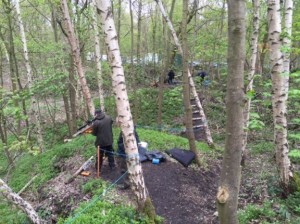 When we finally came back around to the first stretch to finish I was dropping shots I should have made. 3 time world champ Ian Taylor has removed his wind indicator because he said it doesn’t show him what is going on at the target. Mine bit me several times. It told me the wind had shifted, but at the target it hadn’t. This was the most difficult and tricky wind I had ever shot in. Here’s a lesson learned: To get a better read on the wind’s direction hold your muzzle up toward the tree tops to read your windicator. The wind will sometimes swirl around you at ground level and give you a false read. Day 2 result, 26/40. 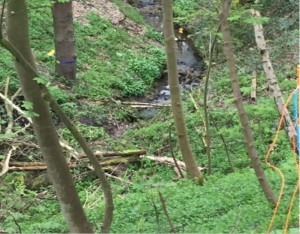 A view of the target. The target is the yellow dot in the upper right center. Held off for wind, held low for downhill. Split the pellet at 4 o’clock.

Although this write up only deals with the shooting, my wife and I had a great time learning to drive on the wrong side of the road, visiting with friends and doing some touring of England. We also saw an excellent professional musical in Liverpool in the same hall the Beatles played at. 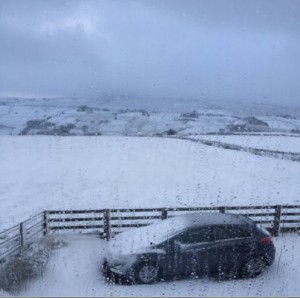 For our stay we rented a cottage in the countryside. This was the view on Friday morning the day before the shoot. I went to Redfearn FT club later for practice. Did I mention it was very cold, wet, and windy?

James Osbourne won the FT event. This shoot is crawling with BFTA and World’s Champions! I spent considerable time talking to several of them and gained some great insights. All the shooters were super friendly and helpful. The FT camaraderie is really strong in Britain. In conclusion, this was the most challenging shoot I have done. Not because it was so much more difficult than the US style shoots, but because it was so different. I finished 27th in AA grade and 3rd in “Overseas Shooters”. I suspect the English shooters would have challenges shooting over here with our reduced KZ. It was a great learning experience. I learned not to always trust my windicator and got comfortable holding way outside the target. I met and talked to some of the World’s great shooters. It is an experience I will long remember. 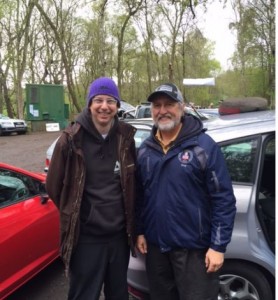