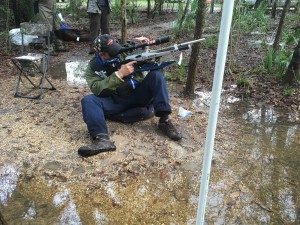 Harold takes a tough angled shot. Check out that water at his feet…welcome to the Bayou!

The 2016 Cajun Classic Field Target Match gave those of us from outside a unique look at a south Louisiana swamp!

I checked the weather reports in the days leading up to the Cajun Spring Classic match and saw a large swell of rain was making its way across the Southwest, into Texas and Louisiana.  I and other attendees were concerned if it would be possible for the match to  be held.  Paul Plauche, the Match Organizer, kept current weather updates flowing to all of those signed up for the match.  It was comforting to hear the rain was expected to clear sometime on Saturday.  Indeed, on our way to the match on Thursday, it rained so hard that it was difficult to even drive.  Still, attendees flew, drive and possibly swam in to make the match.  We had confidence that the Cajun group could make the magic happen and the match would still be “go”. 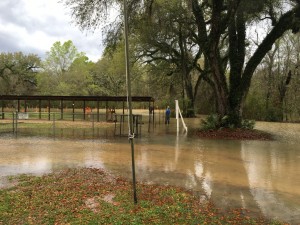 The sight in range and lanes were totally flooded Friday morning!

When I arrived on Friday, the entire location was under water.  The rain flooded the bayou Airgun Club courses and sight-in area.  Fortunately, Paul Plache and the other Cajun organizers set up an alternative location for the pistol field target match.  However, the fate of the rifle field target matches was still unknown as of Friday afternoon.

Saturday morning we arrived to find the sight-in area and most of the two courses drained of the previous water levels as if someone had flushed a large toilet into the bayou.  Paul, with the assistance of other club members and Brad Troyer, quickly went to work setting out the two courses.  Some areas had to still be avoided due to large amounts of standing water. 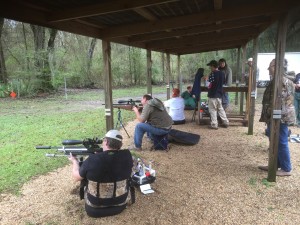 The sight in range in use for the Pyramyd Gunslynger

Pyramyd Air sponsored a gunslynger match on Saturday morning while the courses were being set up by the organizers.  This gave lots the antsy shooters the opportunity to really blow off some air, literally while the course was being prepared.  For those of you who haven’t participated, the gunslynger match works like this:  Four banks of silhouette targets are set out at 10, 25, 40 and 50 yards.  Each shooter is seated side by side in the field target position and goes head to head with their competitor.  The first shooter to knock all the targets down and announce they are done first wins!  Usually, multiple relays are run at the same time.  Once a shooter is eliminated, the other moves on to the next round.  I suppose you could call this a show down of sorts.  I was undecided on participating until the last minute when my buddy Tyler Patner, Match Director of Pryamyd Air, talked me into it.  I had the opportunity to go up against some great shooters such as Jeff Paddock, Ken Hughes, and finally Bill Rabbit.  In the end, Bill prevailed winning first place with $200.  I took second place with a $100 win.  And third place,  Chris Corey, won $50.  It was a great experience and lots of fun was had by all who participated.

The field target shooters meeting was held around noon.  Everyone received their assignments and off we went to shoot.  I was squadded with Paul Plauche on the Belle Terre course.   Since lunch was not yet ready when we started the match, and the organizers were having to be “fluid” / adapt to the post-weather situation, shooters were instructed to come in for lunch after three lanes.  Upon arriving at our second lane, the heavens opened up and Paul and I were absolutely drenched.  We decided it was time for lunch after lane two.  We made it a quick lunch with a small bowl of gumbo (which was amazing!) and went back out to the course. 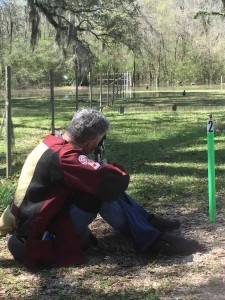 Paul shot well and didn’t miss a target for several lanes.  I was also shooting well until I got to the off hand lane.  Unfortunately, I dropped three shots, which put me way behind early on.  Once again on my first kneeler I dialed the wrong number, missed high before catching the mistake.  All else went well on the course and I ended finishing with only two more misses on the course for a score of 54/60.  Paul continued to shoot well and ended the day with a 58/60.

David Alsup had a great first day and ended with  a 58/60, tying for first place with Paul.  Tyler Patner brought in a solid 56/60 with his new “Skeletor” Styer.  Bill Rabbit and Jeff Paddock also had solid scores for the first day.  Unfortunately, Jeff’s rifle stock was broken in half courtesy of the airline on his flight down from Ohio.  He and Bill Rabbit fixed it with the help of some Home Depot repair parts and Jeff continued on to shoot very well all weekend! 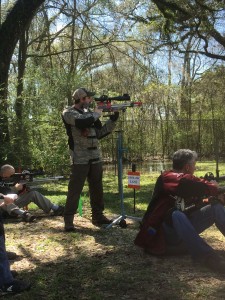 Bill Rabbitt with his Air Arms EV2 cleaning the standers for the day!

There were some great hunter and open division scores posted as well on day one.  Bob Dye turned in a 51/60 in Hunter.  Brad Troyer turned in a 50/60 shooting Piston Division with his TX200.  Considering dark lanes and rain, my hat is off to these guys!

Sunday the field target match began with another twist.  Upon arrival, we found the bayou had backed water up into both field target courses once again.  Unfortunately, the Lagniapppe Course was completely submerged.  About half of the Belle Terre Course was also submerged.  The Cajuns quickly adapted by resetting half of the course in the open field beside the site in range and re-squadded the entire group of shooters.  It worked well and I felt it gave a good variety of both open field, wind shooting and woodland, swamp shooting.  The second day’s course consisted of 16 lanes with 64 shots total.  The extra lane was added in order to spread out the shooters so we would not have too many shooting together and avoid slowing down the entire event. 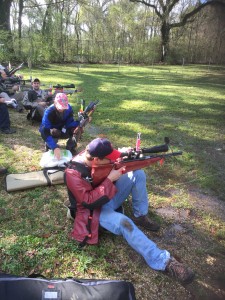 Half of the lanes condensed to deal with the Sunday flooding. Brad Troyer showed us all how it’s supposed to be done with an Air Arms TX200!

I was squadded with Brad Troyer.  Coincidently, Brad was the first guy I had ever shot field target with back in 2006.  Here we were ten years later, still having a great time shooting together!  My rifle was shooting very well.  I did not miss any shots for 12 lanes.  My first miss was in the open field during some windy conditions in the afternoon on a 54-yard target.  I went on to finish with a 62/64.  Fortunately, I made up enough points on day 2 to get me into a 3-way tie for first place with Paul and Tyler.

Once again, Paul shot very consistently on day 2.  He finished with a 58/64.  Tyler Patner also shot an awesome score of 60/64, placing him solidly in a tie for first overall.    This made for a very dramatic ending with the 3-way tie shoot off after lunch.

Unfortunately, it wasn’t determined until after lunch that we had a 3-way tie for first place.  Everyone pulled out their rifles and gear and suited up for the big finale.  I don’t know about the other two, but my shooting jacket sure felt a bit tighter after the jambalaya we enjoyed for lunch.  Brad Troyer set up the shoot off targets.   The shoot-off was conducted in typical WFTF style with one round of seated shots, one round of kneeling shots and a final round of offhand shots. 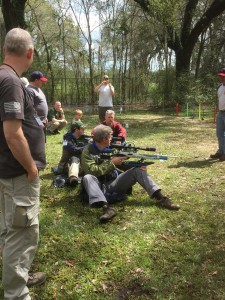 Harold, Tyler and Paul during the shoot off for 1st place and overall match winner

The first round shot from the seated position had a target with a 1” kz at somewhere around 40 yards.  I went first, knocked it down and then it was on to Tyler.  Unfortunately, Tyler missed it so the pressure was on Paul.  Paul made the shot finishing Tyler’s day in 3rd place over all.  Paul and I then moved on to a 47-yard kneeling shot with a 1.5” kz.  I took the first shot and the target once again fell into the water with a loud splash.  Paul also made the shoot.  We both missed the second kneeler.  I could hear the spectators sloshing around in the standing water encouraging one of us to miss.  We then went to off hand.  The target was placed at approximately 40 yards.  I took the first shot and knocked it down.  It was clear that Paul had a great deal of pressure to make a difficult off hand shot while everyone watched.  He took his time and with great skill also knocked down the target.  Once again it was my turn.   The wind had picked up considerably and I missed my shot.  Paul finished the contest by knocking down the target and sealing his first place win over all.

Once again I can’t say enough about how well the match was run considering the adverse conditions Paul and the other Cajuns had to deal with on site.  They turned a soggy situation into a great weekend of field target fun!  As always, the original Cajun food cooked on site was second to none.  My hat is off to the Cajuns for pulling off yet another successful Cajun Spring Classic Field Target Match. 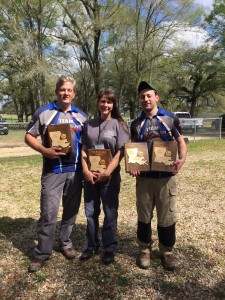