by Tom Gaylord
exclusively for PyramydAir.com. Copyright © 2006 All Rights Reserved

At the end of this article, there's a short video that shows the fast-action fun you'll have with the M190 Special Force pistol by HFC. You'll see how the blowback operates and how accurate the gun can be. Also, you'll see the magazine being filled with green gas.

A realistic gas-powered airsoft pistol that offers something more

Gas-powered airsoft pistols are neat because they are often the closest copies of the firearms they mimic. That's the case for the HFC M190 airsoft pistol, but this gun offers something more. It operates on BOTH green gas and CO2! That can't be said about very many airsoft pistols. 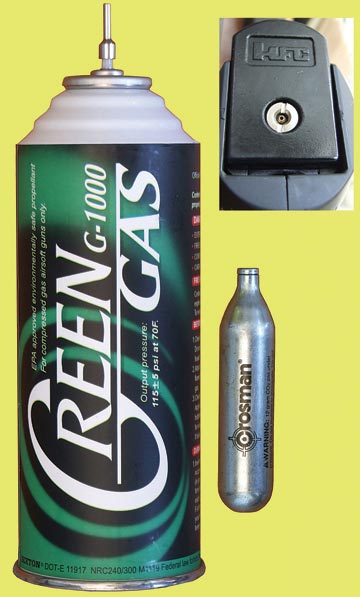 Green gas is a relatively low-pressure gas that comes in large bulk cans. It must be fed into the base of the airsoft gun's magazine through the steel probe atop the can. CO2 cartridges are small metal capsules than usually fit inside a gun. In the M190, they fit inside the magazine.

Green gas is a low-pressure propellant that develops about 115 psi, depending on the temperature. It acts like a refrigerant, similar to CO2, but develops one-seventh the pressure. There are other kinds of gas propellants such as red gas, but green gas has become the No. 1 gas on today's world market.

Carbon dioxide, which is CO2, of course, has been powering airguns for more than 125 years, but its use in airsoft guns is very recent. This refrigerant gas develops 853 psi at 70 degrees F, so it cannot be used with the same valves that green gas uses. Everything has to be different, and the CO2 valve has to be controlled so that not too much gas gets through with each shot, because a little goes a long way where plastic airsoft BBs are concerned. Also, in pistols such as the M190, the slide blows back with every shot. If there's too much gas pressure, the metal parts will hammer themselves from the excessive force.

So, how do you make the same airsoft pistol operate on two very different gasses? The answer is in the valving. That's why there are two very different valves for this pistol and two different magazines to hold them. The green gas mag is smaller because green gas is filled directly into a small reservoir in the base of the magazine. The green gas bottle has a probe that is stuck into the gas port on the bottom of the inverted magazine, then the gas bottle is pressed down to allow the gas to flow. A completely empty magazine may take several two-second shots of gas before it starts bubbling out the gas port, but a magazine with some gas in it usually needs only one two-second shot to fill it. One fill lasts for two magazine's worth of BBs, so you fill with gas, then load the first set of BBs, shoot and load a second set of BBs to shoot again. 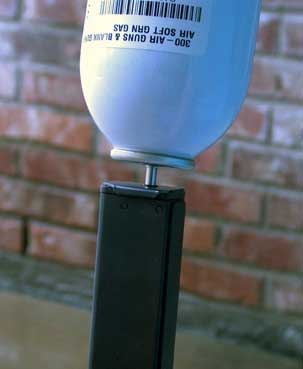 When filling a magazine with green gas, the gas bottle is held above the inverted magazine to drive liquid propellant into the reservoir.

A full green gas magazine holds 27 0.20-gram 6mm BBs. They align in what is known as a double stack - the same as 9mm cartridges align in the Beretta M9 magazine that this copies. Double-stack magazines hold more ammo in a shorter space, but they are wider than single-stack mags, which makes the grips of the guns that have them wider. The Beretta 92 has a very fat and boxy grip that will feel good to larger hands and somewhat oversized to an average mitt.

There is no speedloader for this magazine, so the BBs are put in one at a time. You pull down the spring-loaded follower with the thumb of one hand and load the BBs into the magazine mouth with the other. The secret to not having voids in the double stack of BBs is to lower the magazine follower slowly as you load, so there's only enough room for the next BB to enter. 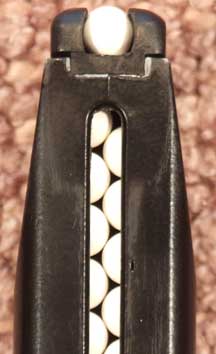 By staggering the BBs, the magazine holds many more, however it also has to be wider. A wide magazine leads to a pistol with a wide grip. Both green gas and CO2 magazines are the same width.

The CO2 magazine is longer, hanging down below the grip when in the gun, the same as a high-capacity firearm magazine. The extra length is to accommodate a 12-gram CO2 cartridge, but it also means the magazine holds 38 BBs in a double stack. And, the CO2 gas is used so sparingly that you'll get about 75 shots before needing a new cartridge. As with the green gas mag, the BBs are loaded singly.

The gun comes with just one magazine, but you can purchase a spare of the same type or the other type at any time and just start using it. Because everything you need is housed in the magazine, there's nothing to change on the gun, just slip in a mag of either type and start shooting.

How does the airsoft pistol perform?

You might be tempted to go after that extra velocity, but I saw a distinct difference in accuracy between green gas and CO2. The pistol is rated for 0.20-gram BBs, and with them I could get a 3/4" group of five shots at 20 feet when shooting with green gas. On CO2, the groups opened up to 2.5" at the same distance. The recoil, which was light on green gas, was sharper and quicker on CO2. 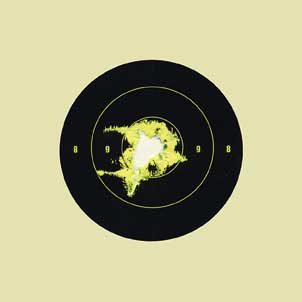 The pistol shoots tight groups at 20 feet when using the green gas magazine and the correct ammunition.

I thought using 0.25-gram BBs might be the answer, but they didn't group any better. I think the greater recoil might be a problem, but you certainly want to use the green gas mag when you want the best accuracy.

I chronographed the gun on a 60-degree day. Green gas was very consistent at an average 284 f.p.s., and CO2 was a bit more random at 340 f.p.s. Of course, as the temperature climbs, velocities will, too, with both gases.

HFC hit the nail on the head with this gun. It's all-metal, so the weight with the loaded and charged green gas magazine installed is exactly a hefty 38 oz. With the heavier CO2 mag on board, the weight climbs to 45.1 oz. They copied a proven Tokyo Marui design, but opened the port on the green gas magazine to get extra performance. The gun is rated to 310 f.p.s. with 0.20-gram BBs and probably reaches it on a hot day.

The airsoft pistol was faultless with both magazines. Firing single-action, you notice a long first stage followed by some creep in the second. In double-action, you have a trigger-pull so light and smooth you'll think the gun has been to the tuner, only no tuned pistol I ever shot had a trigger so light.

Blowback was also without a flaw, and I never saw a double feed or a jam in the approximately 300 test rounds I fired. I have also played with the gun outside the test for another 300-500 shots and, again, no jams or double feeds.

Controls
The ambidextrous safety applies easily, but it doesn't drop the hammer like you might expect. Instead, it disengages the trigger. It worked reliably throughout the test.

The drop-free magazine release on the left side of the grip operates exactly like the one on the firearm, only this one is both easier and faster! Of course, its placement makes this pistol favor right-handers, but so does the Beretta it copies.

When the last BB is fired, the slide remains open, just like on the firearm. That means you cannot function-fire the gun with gas and no BBs to watch the blowback. The magazine must be loaded. The slide release is located on the left side of the frame and can be operated by the thumb of the shooting hand without changing your grip.

One last control is the disassembly pin, which operates exactly like the Beretta's. If you watched Jackie Chan in the movie <i>Rush Hour</i>, you may have seen him instantly field strip the gun with one hand - something that soldiers might like, but law enforcement officers probably don't. However for airsoft shooters who might have to clear a jam or just want to see the inside of their gun, it's a great feature. 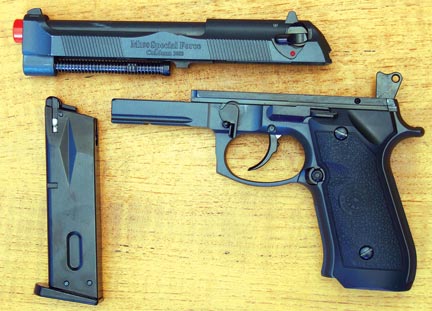 The Beretta 92 is one of the easiest autoloading pistols to field-strip, and the M190 follows suit with the exact same disassembly pin!

Hop Up
The M190 has Hop Up, but it isn't adjustable. That's why the use of the correct ammunition is so important.


This is a lot of gun for the money. Add to that the dual power sources, and you have a real winner. If you want a fast-action airsoft pistol, check out the HFC M190 Special Force!