Blowback action reproductions of the Soviet Union’s most famous pistols

The Soviet Union’s 7.62mm Tokarev TT-30 and TT-33 semiautomatic pistols, which had been adopted by the Red Army in 1934, quickly earned the trust of Russian soldiers during WWII, and continued to grow in popularity because of their power and reliability. In the 1930s the Tokarev was considered a significant step up from the old 19th century Nagant Model 1895 revolvers that had been in use for more than 40 years, and still remained in use even into WWII. The wheels of change had, however, been set into motion after the First World War when the Russian military recognized that their sturdy but antiquated,7-shot Nagant revolvers had to be replaced by a modern military handgun, and by modern, that meant a semiautomatic pistol.

The Russians were no strangers to semi-autos, having purchased semiautomatic Colts since the first Model 1900. They were also quite familiar with the German Broomhandle Mauser and P.08 Luger, and had in fact allowed officers to purchase Broomhandle Mausers as their sidearms from 1914 through the 1920s, but the ultimate goal was to have a Russian made semiautomatic pistol chambered in 7.62x25mm that could become to the Soviet military what the Colt Model 1911 was to U.S. armed forces.

To create such a gun would require someone with the experience of a John Moses Browning (who designed nearly all of Colt’s semiautomatic pistols from 1900 to 1911), and in Russia there was such a man, his name was Fedor Vasilevich Tokarev. A military man and armorer since 1892, in 1900 he became a commissioned officer and regimental master gunsmith. Tokarev had trained as a gunsmith, and like John M. Browning, half a world away, Tokarev was equally fascinated with the concept of self-loading firearms. In 1914, one of his earliest attempts was to build a semiautomatic variation of the Russian Army’s Model 1891 Mosin-Nagant rifle. This led to his appointment to the Imperial Small Arms Factory, and by 1917 he had risen to the position of technical director.

By the end of WWI when the Soviet military recognized the importance of issuing semiautomatic pistols to its soldiers, Tokarev was working at Russia’s famous Tula ordnance factory, where he was developing new arms designs for the military, but none would be as memorable as the pistols that would bear his name.

The TT-30 was Tokarev’s adaptation of John M. Browning’s locking system developed for the Colt Model 1911 combined with his own designs for the pistol’s trigger, and its modular hammer and lockwork put together so that it could be removed from the frame as a single piece and thus simplify the gun’s maintenance and field stripping. Another unique characteristic was the machining of the magazine feed lips directly into the main receiver to reduce cartridge feeding problems. Even still, there was a lot of Browning’s blowback action Colt and FN Models of 1903 and the Colt Model 1911 in the TT-30’s design, as well as the improved Model TT-33.

Chambered for 7.62x25mm cartridges (nearly identical to the 7.63x25mm Mauser Broomhandle round), the Tokarev models held 8 rounds in a single stack magazine, which used a Browning-inspired, frame-mounted release button behind the triggerguard, instead of the traditional European-style magazine release which was mounted the base of the grip frame. The TT-30 design was further improved with the  TT-33, adopted by the Russian military in 1933. Manufactured at the Tula Arsenal, the majority of TT-33 models were issued to Soviet officers, but the pistol was still widely used by Russian troops during World War II. The Tokarev was to become the most famous Russian handgun of the Second World War, and a poplar gun brought home by American G.I.’s after the war (and again during the Vietnam War), thus making the Tokarev TT-30 and TT-33 almost as well known in the United States as in Russia and Europe. The guns remained in production into the 1950s, and were also carried by the infamous Soviet KGB. A robust handgun, the Tokarev was built to withstand the harshness of the battlefield. It was to become the early 20th century Russian equivalent of the Colt Model 1911. 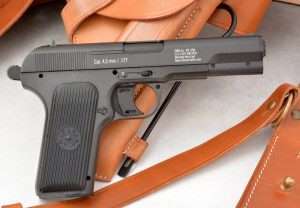 Gletcher’s TT CO2 pistol is based on the TT-33 and like the original 7.62x25mm pistol is designed for simplicity, power, and precision. Using a metal body, powerful blowback action, a sliding safety similar in appearance to the original, identically styled round knurled hammer, long slide release, and frame-mounted lanyard ring, the air pistol has a truly realistic feel and appearance.

The Gletcher TT has a smooth trigger pull for accuracy and the drop free stick magazine holds 18 .177 caliber BBs. Powered by a 12 gram CO2 cartridge concealed in the grip frame by removing the left grip panel (and using a hex head tool to seat the CO2 until the cartridge is pierced), average velocity for the .177 caliber airgun is 361 fps. The hard rubber grips provide a firm grasp, and further adding to the realism of the TT-33 they bear an original style 5-pointed Star and Circle emblem with the letters CCCP around the star. The pistol weighs in at 26 ounces even, and fits aftermarket Tokarev holsters like the example shown from World War Supply.

There are some minor visual difference between the TT-33 and Gletcher TT, most notably (aside from the Gletcher markings on the left and right sides of the slide) is a slightly different look to the right side of the trigger and the design and operation of the manual safety. On the plus side, the .177 caliber muzzle is recessed to give the barrel a larger 7.62x25mm opening. The gun is fitted with TT-33 style front and rear sights (a simple notch rear and blade front), and a properly sized ejection port in the slide with a molded in extractor outline for an accurate look.

As a single action design, trigger pull is long with almost no resistance until you reach the end where there is some stacking until the trigger breaks with an average resistance of 7 pounds, 4 ounces. The blowback action has some oomph to it as well, which adds to the feel of shooting this well built .177 caliber air pistol. The stick magazine can be a bit feisty to load since the follower doesn’t always want to stay put while loading, and a finger must be placed behind the loading port or the BBs just fall through and not down into the magazine. Small trifles, but bothersome. The pistol’s magazine release works perfectly, as does the slide release, in fact, once you start shooting, were it not for the lack of recoil and sound, you could be pulling the trigger on a real Tokarev TT-33.

Even though the sights are small and rudimentary in design (as were the Tokarev’s, this is military arm not a target pistol), it proved accurate enough using a two-handed hold at 21 feet. The rear notch and front blade put shots just about POA and all 18 BBs hit within the X ring (with three just cutting the edge at 3 o’clock) and a best 5 shots dead on the X at 0.7 inches. Average groups measured less than 2.25 inches on all the test targets, and total shots before exhausting the CO2 averaged 54.

What I like best about Gletcher is their penchant for getting small details right (or as many as is practical for a gun that retails for under $100) and building it to perform well. The Gletcher TT delivered on the firing line.