The Glock 19X has the physical presence of an entirely new CO2 model and for all intents and purposes it is, but inside, it is the second of the Umarex Glock model designs, and that brings with it both advantages and disadvantages. Aside from not being able to fieldstrip the G19X, it is the trigger that truly separates the handling between the Third Gen and Gen4 CO2 model operation.

The Third Generation Glock 17-based CO2 model gave us a self-contained CO2 BB magazine, 1:1 dimensions to the centerfire model, and delivered higher velocity than any other blowback action CO2 BB pistol on the market, an average of 376 fps, making the Third Gen Glock 17 suitable for both 7 and 10 yard training exercises, almost impossible with most blowback action air pistols sending BBs downrange at 300 to 320 fps.

We know that the firing system for this gun uses what I call a short, short-blowback action design, meaning that while the slide travels back almost the full length of a centerfire gun when it discharges, it comes up short when the slide locks back or is manually locked open. We also know that the barrel is not a short-recoil, locked-breech, tilting-barrel design; it is a fixed barrel, like a conventional cartridge-firing short-recoil blowback action pistol and there is nothing wrong with this; it is just not how a centerfire Glock 17 is designed, but it works just fine for the CO2 model. Now take this technology and move it into a Glock 19 sized compact (first and foremost making up for the first Umarex Glock 19 as a non-blowback action model with a stick magazine), and you have a design that is unquestionably better looking on the outside, more advanced in its overall design, and still capable of impressive downrange velocity. You have a G19X. But what about the trigger?

On the Gen4 Umarex G17 the trigger is almost exactly like a centerfire model, especially in resistance and trigger pull weight. The Gen4 CO2 model has an average trigger pull of 5 pounds, 5 ounces, right on factory Glock trigger pull specs. It is also a more precise trigger with a shorter take up and reset than the Third Gen trigger. Average trigger pull for the Third Gen measures 6 pounds, 10 ounces. But there is more than just a pound and change difference in the pull. The trigger on the Gen4 is an SAO, it is lighter because unless the slide has been cycled the trigger sits in the fired (rearmost) position and does not function. The trigger on the Third Gen is a DA/SA design (not Glock) and always rests in the forward, ready to fire position. In other words, if you load a magazine and do not rack the slide, the trigger still works. What racking the slide does (and slide recoil from firing) is stage the trigger in a ready to fire condition, resulting in a lighter pull and less stacking, but the same length of pull as double action. And if you do pull the trigger without racking the slide, the resistance on double action is an average of 7 pounds, 3.9 ounces. For authenticity and for more realistic hands on training, the Gen4 trigger is much closer to the centerfire pistol.

The G19X is using the same basic design and trigger arrangement as the Third Gen G17. This is again a DA/SA design with average trigger pull, fired without racking the slide, of 7 pounds, 7.9 ounces, roughly 4 ounces more than the Third Gen. With the action cycled, the trigger is staged, there is less stacking, and average trigger pull decreases to 7 pounds, 2.5 ounces; heavier on the G19X than the Third Gen G17 by almost a pound. Numbers tell one story, hands-on feel tell another. Let’s start with trigger take up with the action cycled on the G19X. Total travel is 0.93 inches. Of that, 0.75 inches is almost 2 pounds, 6.7 ounces average resistance, the balance of the pull weight compressed into the last 0.187 inches and that is very a consistent pull that you can easily manage. Now, let’s compare that to the Gen4 trigger. Total length of take up is 0.25 inches plus another 0.125 inches to discharge. This is also a consistent trigger but with all of the resistance throughout the entire shorter pull. The Gen4 is smoother overall, but the G19X after the 0.75 inches of take up feels almost the same when the trigger pull breaks the shot. For my money, and that would be about $30 more, the Gen4 G17 feels more realistic and is a hair smoother, but it is only sending .177 caliber steel BBs downrange at an average of 317 fps. 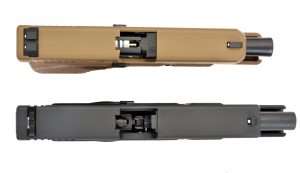 Overhead view of the open actions shows how the CO2 nozzle literally rests against the back of a chambered BB in the G19X. This is part of the design that helps optimize CO2 use and increase velocity by more than 50 fps over other blowback action models. This is the same design used in the Third Gen G17. Below, is the Gen4, which has a CO2 nozzle that closes with the slide and presses up behind the chambered BB. The difference is that the CO2 nozzle is part of the Gen4 firing system within the slide, while the nozzle for the Third Gen and G19X is part of the magazine, which interlocks with the firing system in the frame.

We are starting with a shorter barrel than the Third Gen G17. Internal smoothbore barrel length for the G17 is 4.18 inches, the G19X is 3.8 inches. A shorter barrel length can affect velocity and accuracy. The G19X magazine loads CO2 and BBs exactly the same as the Third Gen G17 with one exception, the new CO2 seating screw tool makes the job much easier than the usual L-shape hex head tools.

Firing Umarex Precision steel BBs, average velocity for the G19X clocked 376 fps and the blowback action imparts more robust felt recoil than either the Third Gen or the Gen4 Glock 17 CO2 models. The high velocity for the G19X was 380 fps, which is 20 fps over the factory rated 360 fps. The next highest was 379 fps, followed by 377 fps, 376 fps four times out of 10, and a low of 372 fps. The G19X is equal to the 376 fps average of the Third Gen Glock 17. Barrel length is a not a factor with this one.

Today’s test of accuracy will be at the standard 21 feet using a Shoot-N-C target and firing from a Weaver stance using a two-handed hold. This is just to see what the G19X is capable of at, what for this CO2 model is going to be “minimum” distance. I had already found during the velocity tests that the gun’s POA needed to be 2-inches below the bullseye and windage almost dead center for POI accuracy. In other words, a proper 6 o’clock hold. If you can keep your aim with the white dot sights, which on this test gun were very well regulated, exactly in the same place and get into the rhythm of pulling through the take up, pausing for a moment, and then breaking the shot, the G19X at 21 feet will pretty much hit in the same place. Since I am not always that consistent with holding my aim (but I am with the trigger pull) I managed a best 10 round group measuring 0.937 inches with seven hits in the bullseye all touching at 0.625 inches. As initial tests go, the G19X has earned the right to go on to the next series of tests from 21 feet out to 10 yards. This one is looking like a keeper.