Home > Blog > Education / Training > The Beeman P1/HW45 is one of my all-time favorite air pistols!

The Beeman P1/HW45 is one of my all-time favorite air pistols!

Spring-piston air pistols are usually pretty anemic, but Beeman’s P1, which is made for them by Weihrauch and also sold as the HW45, is an exception!

Big power in a small package
No, the P1 is NOT small, but the spring piston powerplant that hides inside certainly is. If Weihrauch wanted to, they could reduce the outside of the gun significantly with no loss in power. What keeps it large is maintaining the look of an M1911A1 Colt pistol.

IS it a 1911 or not?
The bottom half of the gun is very true to the M1911A1 pistol. In fact, it’s so close that 1911 grips will fit a P1 and vice-versa. The part that resembles the slide, however, is a different story. It’s HUGE, compared to a 1911. The sights sit much higher in the hand because of the extra height of the slide. That was necessary to house the powerplant with enough metal for the strength needed to cock the gun.

Because the grip is so close to a 1911, the P1/HW45 responds to a 1911 hold. The middle finger squeezes what would be the grip safety into the web of your hand. No other fingers apply any pressure at all. When it fires, the gun bounces in the hand, but in the reverse direction of a .45 firearm.

It cocks like a Webley
To cock the pistol, the upper part of the gun is unlatched and pulled forward, pivoting at the muzzle. There are two distinct clicks in the cocking cycle. When the top is straight up, the first click signifies low power. When the top has swung just a little further forward, the full-power click kicks in.

Although this is a very powerful air pistol, it’s not difficult to cock. You just have to get used to the direction the top is going to swing so you can position your hands properly at the beginning of the cocking cycle. 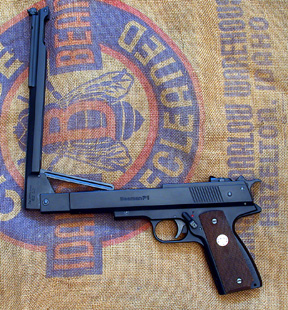 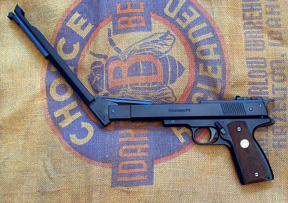 The second click is just a little further forward.
That’s high power. No greater cocking effort is
required to reach this point; you just swing
the upper half of the gun farther through its cycle.

What a fantastic trigger!
There are few air pistol triggers as nice as the P1’s. Only target guns and a few single-stroke pneumatics are as light and crisp. And, you can adjust the trigger for the second-stage engagement point.

Weihrauch/Beeman – What’s the difference?
Well, there is a price difference, for starters. Even though they are made by the same manufacturer, the Beeman version costs a little more. Of course, the names and model numbers are also different. But that’s not the biggest difference between the two. Can you guess what it is? Pyramyd Air will send one free box of Crosman Premier pellets in your choice of .177, .20 or .22 caliber to the first person who posts the correct answer to today’s posting! Use the envelope icon at the bottom of this posting to submit your answer.