Home > Blog > Education / Training > Can you take the pressure?

Fortunately, this isn’t about you. It’s about your airgun. Let’s look at how much air pressure we put into precharged pneumatic (PCP) guns.

More is not always better!
If you are new to airgunning in general or to PCPs, you may think that the greater the pressure the faster the shot. It seems to make perfect sense, doesn’t it? But it isn’t true.

Every PCP is designed to operate at a specific fill level or pressure. If you fill above that level, the gun may work poorly or sometimes not at all.

In the 1950’s, W.H.B. Smith, author of Gas, Air & Spring Guns of the World, reported that a certain multi-pump pneumatic could be pressurized as high as 1,500 psi. Now that’s an interesting number because it’s very close to the pressure at which most of today’s PCPs like to operate. Before you email me to say your rifle gets filled to 3,000 psi, I know it does – but the valve doesn’t work well at that pressure! It likes to work somewhere around 1,900 to 2,200 psi.

To make a PCP, the manufacturer inserts a valve return spring and builds a valve of a certain size that lets it open at 3,000 psi – but only for a VERY SHORT time! Because the air is under so much pressure, the brief time the valve remains open is just long enough to let a certain volume of air escape, and that turns out to be the correct amount to shoot a pellet at the speed you desire (or at least the speed the gun was designed to shoot).

As the air pressure in the reservoir decreases, the valve remains open longer and longer, always allowing the same amount (volume) of air to escape. As the pressure drops, the valve duration increases. For a number of shots, this relationship produces consistent velocity, within reason. When your reservoir has dropped to 2,000 psi, your pellets may be leaving the muzzle at the same velocity as when there was 3,000 psi pushing them (for a shorter period of time).

PCPs have different fill pressures
I learned this lesson from an old Titan, which was the predecessor of the Falcon. It developed 22 foot-pounds; but; when filled to 3,000 psi, it only developed nine! I had to shoot more than 80 shots to get the reservoir pressure down to 2,500 psi, where the rifle wanted to be. Then it was powerful for about 40 shots.

The Condor from AirForce is the same way. Although the company says to fill it to 3,000 psi, many owners have to stop at 2,600 or 2,700 psi to get max power with the first shot. They often think their gun is broken, but it’s really just over-filled. Once they learn the proper fill pressure, their rifle will shoot a Kodiak pellet through a two by four!

Lower fill pressures are an advantage!
If your gun performs well on less air, you’re lucky because you get many more fills from your scuba tank. Or, if you use a hand pump, filling will be that much easier. Don’t worry about getting the correct number of full-power shots. You will get them, they just happen within a lower pressure range.

What happens when pressure gets too low?
When the air pressure drops too far, the valve will flutter and deliver wildly erratic shots. Before that happens, though, the accuracy will start to diminish. You’ll first notice this at long range, so your gun may have fewer good shots at 50 yards than it does at 25.

In centuries past, pressures were REALLY low!
In the 19th century, PCP pressures were only 500 to 700 psi, yet the guns fired balls weighing hundreds of grains and could kill animals as large as deer and boar. The valves stayed open much longer than today, and the barrels were as much as three times as long as PCP barrels today. 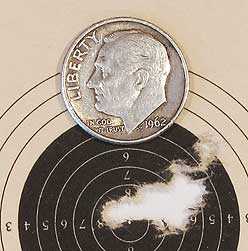 The Beeman C1 – Part 1 The rifle that created the artillery hold!