We have an emergency today. Seems one of our readers received an air rifle for Christmas and needs help sighting it in. Here is his comment, “I have just got a new Gamo Shadow 1000 and I was wondering if you knew how to sight in the open sights?” The nice thing about answering this question is the answer applies to all open sights on all airguns – not just the Gamo.

First – what is the sight picture?
With open sights, there are a number of different sight pictures to choose from. The one you select must be used every time you sight the pellet rifle, or else the sight-in will be invalid. The Shadow 1000 comes with fiber optic sights, front and rear, so the sight picture is a red bead resting down in the U-shaped rear notch between two green dots. If there were no fiber optics, this would simply be a front bead resting down in the rear U-shaped notch. The front bead is held on the spot where you want the pellet to go. This is called a center-hold sight picture, and it is commonly used for sporting purposes.

Starting the sight-in
I like to start sighting in an air rifle at 10 feet. When I’m that close to the target, I know the pellet will land somewhere on the paper, no matter how far off the sights are. Be sure to wear safety goggles if you do this, because you will be hit by lead particles splashing back off the backstop. To minimize backsplash, cover the face of the target trap with cardboard, and mount the target paper to that. I like to use a clean sheet of paper, approximately 9″ tall by 6″ wide. I simply take a real target and turn it around so there is nothing on the paper. I draw an aim point with a ballpoint pen. It should be a circle about 1/4″ across. Fill it in with the pen, so it looks dark.

The first three shots
Using the proper technique for a spring-piston air rifle, because the Shadow 1000 is sensitive to hold, shoot three shots at the aim point. Use the center hold sight picture. The three shots should be very close to each other. The center of the group is where your rifle is currently sighted. I like to bring the group over to the center of the aim point (left/right) first. Here is the big tip of this post – always move the rear sight in the same direction you want to move the shot group. If your first group is too far to the left, crank the adjustment knob on the side of the rear sight to move the notch to the right. On the Gamo, there are index marks on the sight plate and numbers on both adjustment wheels to let you know which way you are going. I like to watch the rear notch actually move as I adjust it. 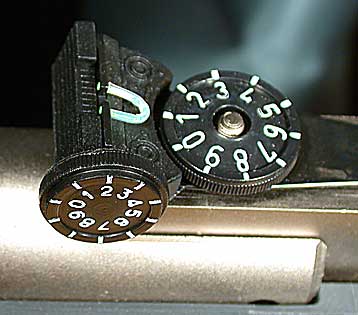 The Shadow rear sight is clearly marked for adjustment.

Get the shot group centered, left and right
Keep adjusting the rear sight windage wheel (the one on the right side) until a three-shot group is centered on the aim point. Don’t worry about the elevation yet. If you adjust the windage knob in the wrong direction (it happens to me all the time), simply crank it back that much more on the next adjustment. Once the shot group is reasonably centered, left to right, you’re ready to adjust elevation.

Elevation adjustment
Note how high above the center of the bore the sights are. It will probably be less than one inch, but pretty close. That is how far BELOW the aim point we want the pellet to strike! The adjustments are made with the large elevation wheel located in front of the rear notch. Turning counterclockwise elevates the shot group. When you have the shots centered on the aim point and as far below the point as the sights are above the center of the bore, it’s time to move on.

Move back to 10 yards
At this distance, you want the pellet to strike in line with the aim point left to right and one inch below the aim point. Make the necessary sight corrections to do this. When you are grouping in the right place, it’s time to finish sighting-in.

Move back to 20 yards
Here you want the pellet to strike the aim point. You’ll probably have to make a new target with a one-inch aim point in order to see it. Try to get your group in the center of the aim point at this distance. Once you’re satisfied, you will be sighted-in at 20 to 35 yards, with the Gamo Shadow 1000. At any other range, you will be low. Shoot several groups at distances outside the sight-in distance to learn where your groups will be.

This procedure takes longer to read than it does to actually perform. You should be sighted-in within 5 to 10 minutes this way.