The Johnson Indoor Target gun was a slingshot with a stock!

In the 1940s and early 1950s, the Johnson Indoor Target Gun was sold by sporting goods stores like Stoegers. Although I am calling it an airgun, it isn’t actually operated by air. It is really a catapult gun – sort of a slingshot with a trigger.

Blue Book!
I have touted the Blue Book of Airguns Fifth Edition so many times that you’re probably sick of it by now. However, in the case of the Johnson, they have a few errors. First – is the name. They call it the Johnson Indoor Target “RIFLE,” when it doesn’t even have a barrel, let alone rifling. I’m showing a closeup of the printing on the right side of the gun, and we’ll let you decide.

Clearly a gun and not a rifle, the Johnson doesn’t even HAVE a barrel!

Second – they list the caliber as No. 6 birdshot, like the Daisy .118-caliber Targeteer and the Sharpshooter catapult pistols. In reality, the Johnson shoots regular steel BBs. It’s a repeater in that it stores many BBs onboard in a spring-loaded magazine on top of the gun, but it seems more like a single-shot because of a rather involved cocking procedure.

A very expensive gun!
In 1948, the price for a Johnson was $15. At the same time, there were two Savage .22 rimfires for less money, and a Benjamin 132 pistol went for $13.50! Perhaps, that’s the reason we encounter so many new or nearly new Johnsons today. About 10 years ago, brand-new, old-stock Johnsons still in the box were being sold at airgun shows for $100. I saw one of these as recently as three years ago at Roanoke. Although the price had climbed to $120, it was still an unused gun! This availability of pristine examples has conspired to keep run-of-the-mill guns under $60.

The boxes are all disintegrating
Johnson boxes are made from acidic pasteboard and, as a result, every one of them is disintegrating today. The ends fall off and a cheesecloth screen pasted inside the top is turning to white powder. I suppose a paper conservator could stop the damage, but I doubt whether many boxes will be saved. In 50 years, there probably won’t be a Johnson box left.

Each gun sat inside a box that turned into a shooting gallery with metal spinners on a wire stand that connected to the box. The cheesecloth hung behind to stop the shots. There was also a small bundle of replacement rubber bands.

The gun has fully adjustable front and rear sights. The rear is a peep sight that actually works very well, while the front adjusts for windage. The crisp trigger-pull makes it possible to hit very small targets at close range. 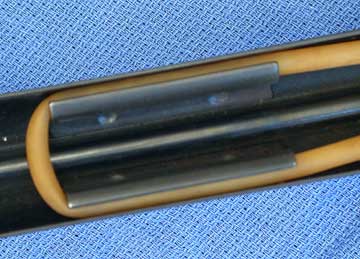 Surgical rubber tubing makes a handy replacement for the original Johnson rubber bands. This arrangement is inside the top cover, where the band can be captured by the launcher during cocking and loading. 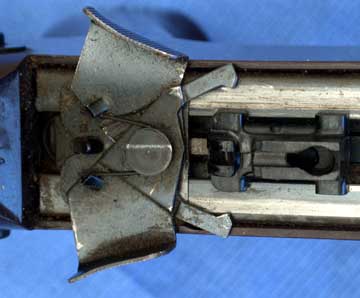 The mechanism that both cocked and loaded the gun

Weird cocking!
To cock and load, a pair of metal fingers at the “breech” are squeezed together and pushed forward, pushing a plastic launcher in front of them. A groove in the launcher captures the rear of the rubber band and the entire mechanism now slides to the rear, where the sear catches it with a click. As it passes a metal release lever in the magazine, one BB is dropped into the launcher seat.

Velocity depends on the strength of the rubber band, and my own gun can fling a BB up to 101 f.p.s. It never varies by more than two f.p.s., which makes it even more stable than an airgun. Of course, 100 f.p.s. isn’t much, but the scale of the target gallery is perfect for it.

I admit I don’t shoot mine very much. It’s too cumbersome and too slow! But, I’ll always keep it for the sheer curiosity of the thing. 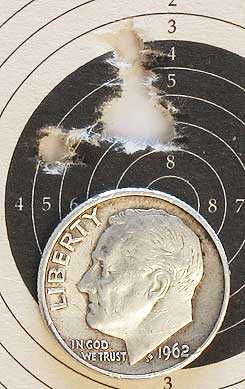 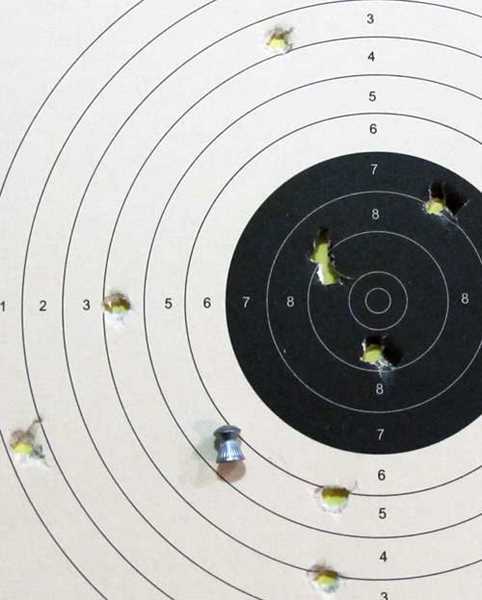