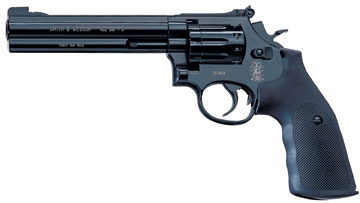 Every bit the Smith & Wesson revolver, this model 586 is a jewel!

I’ve often referred to these revolvers when talking about other models, so today I decided it was high time to give credit where it is due. The S&W 586 and 686 revolvers made by Umarex are the best CO2 revolvers that have ever been made – bar none! They represent the standard by which all other CO2 revolvers are judged. Yet because of their cost, these wonderful airguns are not as popular as the others, which is a real shame. Because it is my opinion that the S&W 586 and 686 revolvers are the absolute top of the Umarex pellet pistol line!

A soft spot for S&W
I have always gravitated toward S&W revolvers. Yes, I had a Colt Python that was as fine as any revolver I’ve ever owned and, yes, I currently own two Ruger .357 DA revolvers that I find very nice. But there has always been something about the S&W action that I liked better than all the others. So when Umarex announced they were coming out with the S&W 586, I was thrilled. I was in tight with the S&W European sales rep at the time the CO2 version of the 586 first came to America, so I got my hands on it about six months before anyone else. Was I ever impressed! The action that is so nice in S&W firearms was almost perfectly translated over to the CO2 revolver. It actually has a better double-action trigger and only a hint of creep in single-action.

Great finish, too!
Surface finish of the early Umarex blued pistols was sometimes flawed by hazy sections that didn’t respond to any treatment. Not all guns had the problem, but enough did that I always examined any new blued gun with a critical eye, and I have yet to see a 586, which is the blued version of the gun, with this problem. The grips are two-piece grippy rubber, very reminiscent of a pair of Hogues – so you don’t have that to buy.

10-shot pellet clips!
The 586 departs from the typical Umarex design in that it has a 10-shot pellet clip instead of the standard Umarex 8-shot clip. This clip is unique to this one model, and the cylinder crane swings out to receive each new clip. The clips are finished only in blue, and I have never understood why Umarex hasn’t made a matching silver clip for the 686! The usually style-conscious Germans appear to either not care about this detail (I don’t believe it), or else the addition of one more SKU for such a low-demand part makes REALLY POOR business sense! 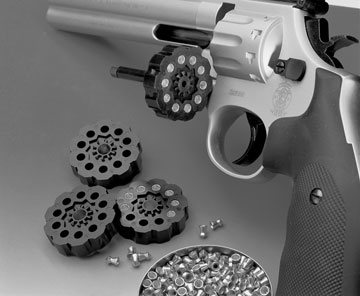 The 10-shot clips swing out to the side on a real crane for removal. Blue (black) is the only color available.

Powerlet hides in the grip
The right grip panel is removed to reveal the powerlet. A lever at the bottom of the grip swings downward to releave tension on the expended powerlet that can then be easily removed. A thumbwheel adjustment compensates for length variation between powerlets. The grip panel is held on by both a clip that grabs the powerlet (so you have to really pull to get the grip off) and some locating features in the grip panel itself. As a result, the grip feels firm and solid when it’s on the gun. 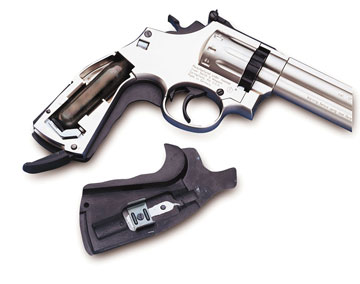 Pop off the right grip panel for access to the powerlet. The lever at the base of the grip frame relaxes tension on the powerlet.

Power and accuracy
Although a revolver usually has a small gap between the cylinder and the rear of the barrel (a few guns have moving cylinders to compensate for this gap) through which gas can escape, the S&W exhibits good power. With the 6″ barrel, I got velocities averaging 410 f.p.s. with Hobbys and 370 with R10s. Though the gun was faster in double-action than single-action, the difference was just 3 f.p.s. with all pellets tested. Usually, a CO2 revolver is faster in the single-action mode, so this is a different airgun, to be sure.

I got group after group of 5 shots measuring less than one inch at 10 meters. That puts the 586 ahead of all other repeating air pistols, save the high-dollar target pistols such as the Drulov DU-10 and the like. Among the Umarex airguns, only the Walther lever-action rifle shoots better.

Is it worth the extra money?
Tough question. A glass of water means a lot to a man in the desert but not to a guy who just fell overboard! To me, it’s worth it. I liked the air pistol so much that I went out and got a 686 .357 to go with it. True story!