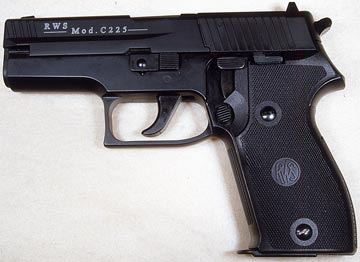 The RWS C225 is the second action pistol Umarex made. It’s no longer available.

This report is for a reader who specifically wanted to know about the C225. Although under the skin it’s identical to all the other Umarex CO2 pistols, the C225 did have the distinction of being the first Umarex gun to be cancelled. Let’s see if we can figure out why.

Second pistol Umarex made
The Walther CP88 was the first pistol Umarex made. It came out in the latter half of 1996 and was received with great fanfare. The realism of the new gas pistol got airgunners excited and anxious to see what would come next. One year later, in September 1997, the RWS C225 hit the streets. However, in sharp contrast to the CP88’s instant fame, the reception for the C225 was less than thrilling. I believe that was for a couple of reasons.

What chilled the C225?
First, the C225 is finished matte black. The CP88 was this gorgeous dark shiny black pistol, but the C225 was a dull gun that hid the realistic castings. The form of the SIG 225 this air pistol copied is also nondescript. Rather than the sexy curves of the P88 firearm that eventually proved too expensive for Walther to manufacture, the 225 is a cookie-cutter pistol that looks like a thousand other handguns few people can identify. It’s a sort of modern action pistol chic, which makes it as unexciting as a Glock.

The second reason for the poor reception is the one that I believe really doomed it. RWS was made the exclusive distributor, to the extent that their name went on the gun. Unlike Colt and Smith & Wesson, which actually produce the firearms that Umarex copies, RWS doesn’t make the 225. I’m sure it must have seemed like a good business decision when the deal was struck; in truth, RWS was searching for its own identity in the airgun world at the same time, and I think this fine little pistol got lost in the shuffle. Sales lagged behind all the other pistols that joined it within a few years. In the end, it was difficult to justify a model that wasn’t selling.

The gun
The C225 is really a rather nice air pistol. Like all Umarex pistols, it’s really a .177 caliber 8-shot revolver disguised as a semiautomatic pistol. The slide separates in the middle, and the 8-shot pellet magazine is loaded into the gun. It fires both single- and double-action without a lot of velocity variation between the two.

Performance
There isn’t a nickel’s worth of difference among the Umarex pistols that have barrels of the same length. The C225 shown here has a 4″ tube, so the maximum velocity with 6.9-grain RWS Hobby pellets (in 1997 that’s what they weighed) was about 370 f.p.s. Heavier H&N Match pellets slowed down to an average of 352 f.p.s. You’ll get about 50-60 good shots from a CO2 cartridge, though the velocity will vary by 90 f.p.s. If you want a tighter spread, you’ll have to stop shooting at 40 shots, but this kind of pistol doesn’t warrant that degree of fanaticism. This is an action pistol that’s designed to shoot many reactive targets, one after another. 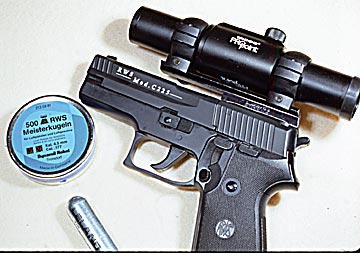 Accuracy
B-Square made a mount for a red dot sight that fit into the rear sight dovetail. It worked well because the design of the pistol allows reloading with the sight mounted. At 10 meters, the C225 groups five shots in 1-1/8″ when you rest the gun and really try. That’s on par with all the Umarex pistols.

If you want a C225, it shouldn’t be too difficult to find. Even after they were cancelled, the interest has not picked up and a used gun in the box should be available for around $100. Find them on the airgun classified sites.