Yesterday, we saw what kind of performance to expect from an inexpensive Chinese airgun. The velocity was just over half the advertised speed, and accuracy was out the window. Let’s see what can be done to correct these problems. You’ll have to decide whether or not it’s worth the effort.

One of my most vocal readers was a man by the name of Ray Apelles. He and his father, Hans, had modified several Chinese spring rifles with varying degrees of luck, but he strongly recommended that I test and tune one for The Airgun Letter. He said he would even provide the tuneup guidelines. As it turned out, Ray actually wrote most of the report.

What’s inside?
Upon disassembling the gun, I was pleased to find that the piston seal was leather. Leather is much more adaptable and forgiving for the home tuner, as long as you aren’t going for magnum power. The TS45 could never achieve that power level with its narrow piston bore and short stroke, so a leather seal was most welcome.

I also found all the metal parts to be durable and properly hard. They did suffer from too many burrs and rough edges, but several hours of careful stoning took care of that. Ray had me sleeve the transfer port to reduce its diameter. That improved the airflow pattern and kept the piston from slamming into the end of the compression chamber 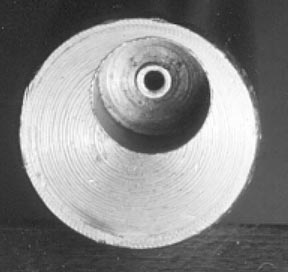 A brass tube has been swaged into the walls of the air transfer port. It reduces the inside diameter from 0.141″ to 0.125″.

New piston seal
Ray had me make a new leather seal for the rifle. Since I had written an article about how to make leather piston seals of any size, I just followed my own instructions and made a tight one. I lubricated the compression chamber with moly grease (Beeman M-2-M), soaked the leather piston seal in petroleum oil and put the gun together. Velocity with H&N Finale Match pellets went from 460f.p.s. to 580 f.p.s. from doing just these minimal things, plus removing all the burrs in the action. Accuracy remained poor, of course.

New mainspring
Next, I installed a Maccari mainspring and lubricated it with Beeman Mainspring Dampening Compound. Today, I’d use Maccari’s Velocity Tar (it wasn’t available in 1996). Velocity increased with the same H&N pellet to 666 f.p.s. The firing behavior was now very calm and free from vibration.

X-ray vision
Ray works in the radiology department of a hospital, so he took some X-rays of the trigger parts both cocked and uncocked. They show a different picture than most shooters conceive their trigger looks like, so I included them here. 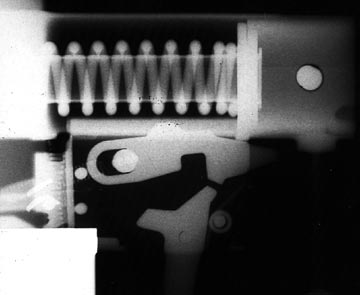 This is what the trigger looks like when the gun is not cocked. 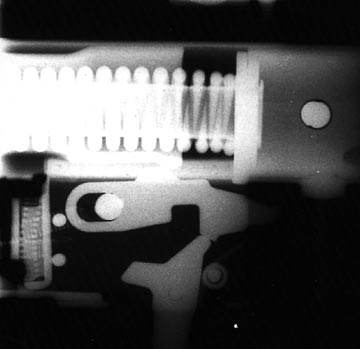 Here’s the trigger when cocked.

I did lube the trigger parts with moly. That resulted in a crisp, positive 26-oz. pull. No stoning was done because Ray warned not to do it. As you can see in the X-rays, the trigger doesn’t function like you might think.

New barrel
Finally, I shipped the action to Dennis Quackenbush, who installed a Lothar Walther barrel for me. He was kind enough to polish and blue the barrel and action before returning it, so it looked more like a European gun afterwards (except for the stock). Accuracy went from 2″ at 10 meters down to under 1/4″. And, this barrel was cut off, so it wasn’t even choked. Who knows how much better it might have been?

What did I gain from all this work? I took a $30-40 Chinese sidelever, spent about $150 plus 12-15 hours of time and got the performance of a CZ 630 that I could buy for $80 at that time. Was it worth it? No – if the goal was to get a good rifle cheap. Yes, if the goal was to play around inside a rifle I wouldn’t be afraid to damage. After it was all over, I still had the same opinion of cheap Chinese air rifles, but now I had added some hands-on experience.