A reader asked this question last week, “Just what is a Weaver base and how is it different from other scope mounts?”

Scope mounting was such a hassle back then that several companies sprang up to help solve the problems. But scope companies had a lot riding on the ease of mounting their products, so Weaver designed a type of scope mount base that is still very popular today. It’s easy to attach, yet it provides a solid scope mount. It is a wide dovetail (0.617″), but the most important feature is the presence of several slots running across the base. These slots accept keys, which are on the bottom of the scope rings. Those keys keep the scope rings in one place when the gun recoils. 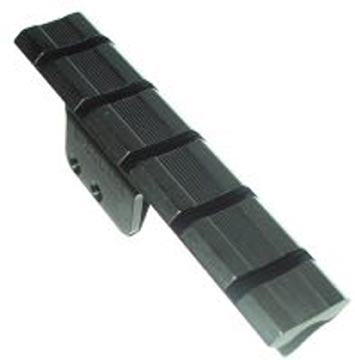 B-Square Weaver base shows the slots for the ring keys. This one is for a specific gun, but Weaver rails also come as bulk extrusions that a gunsmith can cut to fit. 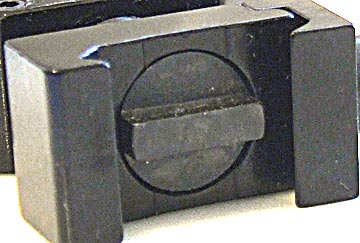 This key on the base of a B-Square Weaver ring fits into the slots on the Weaver base. They will also fit the slots on a Picatinny rail because they’re thinner.

It wasn’t popular to mount a scope on an airgun at the time Weaver mounts came into being. When shooters finally did start mounting them in the 1970s, the Weaver mount wasn’t used. At first, companies such as BSF, Diana and Weihrauch used the raised rails on their rifles for diopter sights as their first scope mount bases, but over time most of them progressed to a wider dovetail – the so-called 11mm dovetail that in reality extends from 9.5mm to 13.5 mm. The Weaver base would have served them well, but they never used it.

Today, the airsoft crowd uses Weaver mounts more than the pellet and BB gun crowd because of their ties to the military. Back in my day, 40 years ago, the military had no good common way to mount a scope on a rifle. Every country and manufacturer did it their own way, which is why some sniper rifles look so odd today. Take a good look at a Mosin Nagant made for sniping!

Mosin Nagant sniper rifle looks extremely archaic with its high-mounted scope. Rifle was never intended for a scope when it was designed in 1891.

When the military finally did get around to standardizing their mounts, they borrowed the slot feature from the Weaver mount and improved it by placing the slots at regular distances from each other. Finally, there was a standard mount base that could use standard equipment. Best of all, the Picatinny rail, as it is called, has wider slots than the Weaver mounts, so Weaver rings will fit a Picatinny base! A Picatinney slot is 5mm wide, while a Weaver slot is 3.5mm. 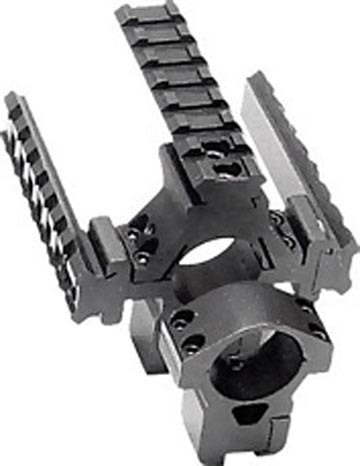 This Tri Rail has three Picatinny rails extending from the front ring. The slots are wider than Weaver slots and spaced closer together for ease of adjustment.

Picatinny extrusions come in standard lengths that a gunsmith can cut to fit a particular job. And, the mount market is red-hot for Picatinnys right now!

When you see the Picatinny rail, the value should be obvious. It is the Lego block of the scope mount world. Positioning scope rings is easy, and they’re held tight against shock and recoil by the cross key. Unfortunately, airguns do not use them. The first company to try will meet a storm of protest from the shooters who have a heavy investment in 11mm equipment, but Picatinny is by far the better system for mounting a scope.

23 thoughts on “What is a Weaver mount?”