I promised great things this week, and I’ll start today!

I’m writing this a couple of weeks before the first Benjamin Super Streaks are due in. I’m doing it to placate several readers who really want to hear about the rifle, plus I’ve had a personal interest in it since first seeing it at the 2007 SHOT Show. The rifle I am reviewing is an early gun, but it was sent to me with the blessings of Crosman, so I believe it pretty well represents the production Super Streak.

First – the name!
By using the name Streak, the company really got the internet buzzing with speculation. Of course, the names Benjamin and Streak don’t go together. Streak is forever identified with Sheridan, which a few of us old silverbacks remember as a company that was once separate from Benjamin. More importantly, Streak has been the name of a multi-pump pneumatic for more than a half-century. Early rumors predicted that Benjamin was about to bring out a powerful new multi-pump pneumatic. I laid that rumor to rest on November 5. When I did, readers found out that I had the rifle. Then, the pressure started to review it quickly. I stalled because I knew the guns would not be out in time for Christmas. The Pyramyd Air website shows them arriving by December 19, but I’ve seen that date change in the past, so don’t hold your breath. Any new launch of a gun has great potential for delays.

Next – the gun!
The Super Streak is a conventional single-shot breakbarrel spring-piston air rifle that’s available in .177 and .22 caliber when it comes out. The advertised velocity of 1500 f.p.s. (.177) is fiction of the same sort that Gamo uses with the Hunter Extreme. Spring airguns don’t go that fast. You readers who’ve read this blog for at least the past 6 months know that. However, Crosman is targeting the much larger general shooting public who haven’t got a clue. To remain competitive with Gamo and RWS Diana, they have to stretch their numbers upward as well. One of the things I’ll do is chronograph the test rifle with several pellets of known performance so you can see the real story. But before we do that, let’s give it the once-over.

Gossip and truth
Gossip first. Yes, this rifle is positioned to challenge the Gamo Hunter Extreme and the RWS Diana 460/350 Magnum rifles. It’s big, powerful and demands the utmost in shooter awareness (of the proper spring airgun shooting technique).

Now, the truth. This is a Chinese-made airgun, but I don’t think you pneumatic genealogists are going to be able to trace its origins. That’s because I don’t think it has any. I think this is the first time we have seen this particular model. Ok, it has links to Spanish guns. The Gamo-style safety on the trigger gives that away. But the powerplant doesn’t seem familiar.

Overall
The Super Streak is a very large air rifle. As the specs on the website indicate, it is 49.75″ long, which is about as long as sporting airguns come these days. The weight is 8.5 lbs. without the scope, but the factory-mounted 4-16×40 CenterPoint scope that comes with the combo bumps that up to 10.25 lbs. The stock is a thumbhole and fully ambidextrous. Shooters with large hands will appreciate all the room they’ve been given in the pistol-grip region.

A word about the scope
The scope they have selected for you is no chum optic. It’s a top-of-the-line sidewheel parallax-adjustable glass. It has a duplex reticle with mil-dots and flip-up scope caps. Compare all that to the specs of most combo scopes, and you’ll agree that Benjamin has poured the money into this one.

PS. After this post went live, Michael in Fla. pointed out that he had a similar scope, but his was not sidewheel parallax adjustable. Well, I looked and neither is the one on the test gun! I am sorry for the confusion this mistake may have caused. The parallax adjusts on the objective bell and the left turret adjustment controls the reticle illumination.

And the rest of the gun
The stock has four areas of fine stippling – one on either side of the grip and one one either side of the forearm. It’s a fine, smooth stippling that doesn’t arrest your hands. Underneath the forearm, the name Benjamin has been cut into the wood in tall letters. I was told it was for effect when the rifle sits in a rack. It jumps out at you! The stock is finished a dark, even brown with a dull matte sheen. The Monte Carlo raised cheekpiece rolls over to equal depth on both sides of the butt. 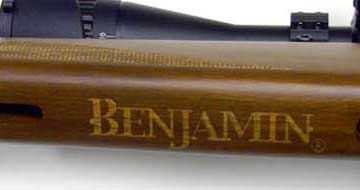 The name Benjamin is boldly carved into the bottom of the forearm.

The metal of my test rifle is finished an even matte blue, but for those who want a brighter gun, a matte nickel finish is also available. Both will have a black faux muzzlebrake/cocking aid. According to Pyramyd’s site, the nickel version is available in .177 only, but the blued version comes in .177 and .22.

There are a beautiful set of adjustable open sights on the gun, even though it comes from the factory with a really primo scope already mounted. The front sight actually accepts replacement inserts, and the rear is adjustable in both directions. I’m thinking that the folks at Benjamin would not put a set of sitghts this nice on the rifle unless they believed that a fair number of users really wanted them. Sights have a cost, of course, and it would have been just as easy to install a cheaper set on the rifle if they thought people wouldn’t really care. I really see a lot of potential in this new rifle, but I’ll hold up judgment until the testing is complete.