Back in 1978, the airgun world was at the beginning of a velocity revolution. The FWB 124 had come to market earlier in the decade and was capable of almost 800 f.p.s. right out of the box. With careful tuning, it became the first spring-piston air rifle to break the 800 f.p.s. “barrier.” Hot on its heels, the BSF 55 was soon tweaked to 860 f.p.s., and even the old lumbering HW 35 was capable of just 800 with careful tuning of certain rifles. That left Diana, a major player, as the only quality German house without a player in the big game.

Diana (this was before RWS became a major distributor of the line) had their model 35, a large breakbarrel they advertised as shooting 725 f.p.s. In truth, the rifle barely made 675, which was only 25 f.p.s.. faster than the much lighter and slimmer Diana 27. Tuning did nothing for the 35. It was permanently hamstrung by a too-short piston stroke. When FWB, BSF and HW went off to the races in the early 1970s, Diana was left standing at the gate. The model 45 was supposed to fix that.

Diana 45 was a large, handsome breakbarrel spring-piston air rifle. This one is from 1983 and has all the earliest features.

The 45 first came to market in 1978. Those were still the days when Dianas were being made by Milbro in Scotland, so instead of calling them Dianas, all the German-made guns had to be called Original when shipped outside of Germany. The first Diana 45 to come to America came as the Original 45 and sold by Air Rifle Headquarters. The basic rifle got 790 f.p.s. in .177 and could be tuned to deliver 845-860. It was an immediate rival of the BSF 55, though it cost about twice what the smaller rifle did.

The 45 was a departure from Diana styling in a number of important ways. First, and in my mind, most importantly, they unitized the trigger. Prior to this, Diana triggers were a swarm of loose parts that worked only because they were held in close confines by the spring tube. Outside the gun, they were separate parts. The 45 trigger was the first modular trigger their sporting air rifles had. 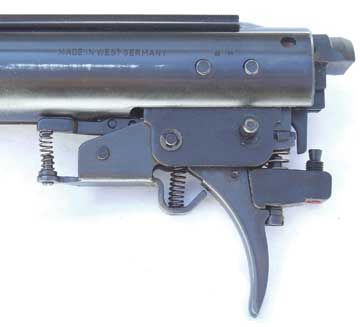 This trigger was Diana’s first unitized trigger system. It was very adjustable for its day.

Another design element was the introduction of a long-stroke piston. That’s where the 45’s power came from. The rifle was also very large and had a more Western-style stock. By today’s standards, it looks normal, but compared to the other air rifles available in 1978, it looked like a Weatherby among a bunch of military Enfields.

Diana retained their famous ball-bearing barrel-locking detent. That feature was so popular that Feinwerkbau had copied it on their 124. It made the gun open much easier than a similar rifle with a traditional chisel detent. 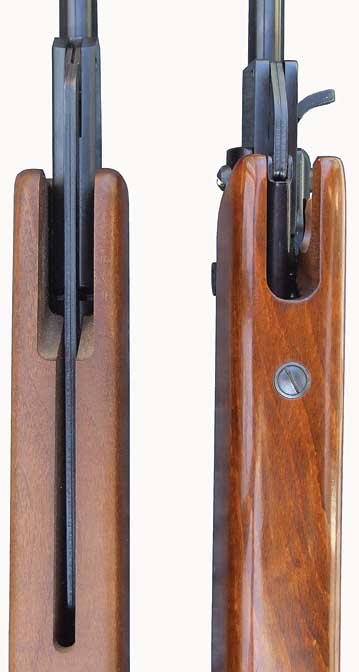 A comparison of styles. The Diana 45 cocking slot (left) had to be long to clear the one-piece cocking link when the barrel was broken for cocking. The HW 35 slot was much shorter because the rifle used a two-piece hinged cocking link that hugged the bottom of the action. The short slot was supposed to dampen vibration and be easier to install a sling swivel.

They stumbled with the piston and breech seals. By making them leather instead of synthetic, they gave away 150 f.p.s. Within five years, Diana (now called Diana everywhere and distributed by RWS) would bring out the models 34, 36 and 38. Each more powerful than the 45 and all, except for the walnut-stocked 38, far less expensive. It’s difficult to sell an 850 f.p.s. rifle for $300 when you’re also selling a 1,000 f.p.s. model for $100, which was the case with the Diana 45 and 34 in the mid-1980s. They added features like front sight inserts and walnut stocks. Until the 45 got its own synthetic breech and piston seals in 1988, it was an uphill battle.

That said, the big 45 still has a large following of enthusiastic owners. Of the Diana breakbarrels, only the 34 is loved by more shooters, and it was produced in far greater numbers. There were many different models of the 45, including a factory commemorative model with a walnut stock and an inset brass medallion.

The 45 remained in the Diana line until 2004. It’s still shown on the German website, but it’s no longer in the catalog. Models like the 350 Magnum have eclipsed the power of the final version by so much that it simply could not keep up.