I’m on the road driving to the Roanoke Airgun Expo today, so I’m asking the old hands to help me with the comments. I’m taking an extra travel day both ways to ease the strain. Naturally, I’ll give you a report of this year’s show.

I made the picture big so you can really see the rifle. Crosman’s 114 is what little boys’ dreams are made of.

Crosman’s 114 pellet rifle may have been the precursor to the modern precharged rifle. It’s a single-shot. It stores bulk CO2 gas and liquid in a reservoir under the barrel, and it has the same general look of the Benjamin Discovery. It also has a simple rear aperture sight.

Wacky Wayne saw this 114 and asked me how it shot. To tell the truth, I never shot this one before now, but the last 114 I owned shot just like a PCP.

History
The 114 was the .22-caliber companion to the 113, a .177 caliber bulk-fill CO2 rifle made between 1950 and 1955. Crosman had limited success with their first CO2 rifle, the CG that launched league shooting in the late 1940s. Oh, there was an earlier version of the bolt-action repeating model 118 (model 117) that existed in the 1930s, before the war, but it never went anyplace. So, the 113/114 rifles were really Crosman’s first successful foray into the world of commercial CO2 air rifles. The repeating 118 came out two years later.

At the same time these rifles were selling, Crosman also made four CO2 pistols–the 111 and 112 that have 8-inch barrels and the shorter 115 and 116 with 6-inch barrels. With all of the Crosman guns from this era, the lower number is the .177 and the higher is the .22.

The bulk-fill guns came with a CO2 tank that holds 10 oz. of liquid and gaseous CO2. The tank connects to the guns at the front of the reservoir (under the muzzle) and opens to fill the gun. I’ve recorded about 70 shots on my other 114 and 50 shots from a 111 I used to own, so I would expect this one to do about the same.

Back when these rifles were new, an owner was expected to send his CO2 tank through the Postal Service (those were simpler days) to get it refilled. Today, most serious airgunners fill their own CO2 tanks from a 20-pound bulk tank they have on hand. That large tank is sometimes used as a fire extinguisher, and I once used one of the three bulk tanks I own to put out a fire in a stolen Mustang that the thief abandoned in front of my house.

There’s another, even easier way to fill bulk-fill guns that I’ll discuss in Part 2.

Design
The 114 is simplicity itself. A small brass receiver is attached to a brass tube that houses both the action and the reservoir. The valve is a straightforward, knock-open type, and the barrel can be made of brass or steel, with brass preferred because of condensation.

The breech is sealed at the rear, not by an o-ring, but by a metal bulge on the bolt that’s pushed into a mating flare at the rear of the barrel. That’s all that keeps the pressurized gas from coming back at your face like a supercharged glaucoma test. It does work, as long as the shooter remembers to engage the locking slot for the bolt.

The trigger couldn’t be simpler. Just a lever that gets out of the way of the hammer. The safety is equally simple–a crossbolt that blocks the trigger.

The finish is black paint on the metal and a thin shellac finish on the wood. Most of these guns have been refinished numerous times by now, so original finish on a gun is always a plus. The Blue Book of Airguns has a lot of special things to look for on these models–things that can boost the value because of rarity, so don’t start carving on the stock before you check to see if you have something special.

The rifle is just over 38 inches long with a 21.5-inch barrel. It weighs 4.75 lbs., which makes it a light, handy rifle. The stock is without comb or cheekpiece, so it’s quite ambidextrous, though the cocking-bolt handle is on the right side of the receiver.

One neat tidbit is that all three CO2 guns came with power adjusters. Even back in 1950, Crosman engineers knew what shooters wanted. Imagine a power adjuster two decades before the first affordable chronographs!

The rear sight is an aperture that adjusts via an oval slot for windage; and for elevation, the eyepiece loosens to slide up and down. It couldn’t be simpler, and it mimics the inexpensive peep sights seen on single-shot youth rimfires of the day. 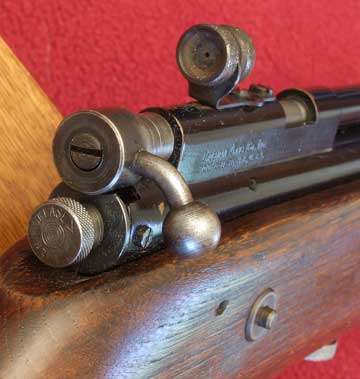 This is action central. The bolt works conventionally. The knob just below adjusts the power through tension on the hammer spring. The peep sight is held in place by friction screws. And the safety is a crossbolt through the stock.

When we come to Part 2, I’ll show you how this little rifle is filled.