Before I start today’s blog, I want to let you know that Pyramyd Air has slashed the price of the Hammerli Pneuma…by almost 30%! It’s dropped from $495.95 to $349.95. This is a huge deal and a great way to enter the PCP arena without spending a fortune. I don’t know how long the price will stay at that level, so don’t hesitate if this is a gun you’ve been eyeing. Now, on to today’s blog.

When I lived in Maryland, I had many friends who were airgun enthusiasts. We not only met at the local airguns shows, one of which we ran in Damascus in August each year, but we also competed in field target matches and 10-meter pistol matches throughout the year. One day, while waiting for my group to shoot in a match down in Rockville, a friend showed me something he had just acquired. It was a long wooden case that any gun owner would know had to contain a gun.

When he opened the case I saw a sight that quickened my heart. Inside was a like-new FWB 124 and accessories, all in like-new condition. I had to own this rifle, so I immediately set about building an acceptable trade for it. Fortunately, the man who owned it is a good friend and went relatively easy on me, though he didn’t have to. I wanted this gun so bad I would have given almost anything to own it. I still probably gave too much for it, but there really are no equivalents to compare to.

This FWB 124 was enshrined for all time by its former owner. If you look carefully, you can see that there are three padded projections in the box lid that press down on the rifle when the lid is closed. These projections prevent the gun from moving.

One thing my friend made me promise is that I would document the rifle so everybody could share in the experience he and I had when we looked in the case. I had no problem with that request, for indeed, that was part of the reason I wanted the gun–to be able to research it and discover just what it was. When I got it home, I immediately set to the task.

I examined every accessory inside the case, as well as the case itself. It was custom-built of pine for this rifle and all the items inside. The wood was of cabinet quality, which is to say clear and free from knots. But it was nothing special or out of the ordinary. The larger pieces were made from plywood. You’ll notice that the compartments are asymetric.

The wood was painted a flat brown and fitted with utilitarian hinges and clasps to hold it closed. The man I got the gun from had removed the center clasp and replaced it with a carry handle, which was a nickel-plated drawer handle, so the box now does not close as tightly as the maker had intended, but it’s easier to carry. Obviously, the maker had not envisioned transporting the gun as much as simply storing it, which was a big clue as to what was going on. All eight corners of the box are reinforced with brass edge protectors. The workmanship of the build is top-quality.

The rifle was very early. I could tell that by the older-style black plastic trigger that was offered only in the 1970s, and by the address of the Beeman company stamped on the gun. San Anselmo was their very first address, when the Beemans were operating out of their home.

The San Anselmo address on this 124 marks it as sold from the original location of Beeman Precision Airguns.

When I examined the contents of the box, I was struck by their age. These items had been purchased from the Beeman Precision Airguns company back at the start of their existence! They bore the image of Boswell Bear, something that went away very early in the life of the company. I knew these labels because I had been a Beeman customer almost from the start in 1973, but I had not seen labels like these for two decades! Clearly, this gun and its accessories were very old, yet they looked like they were brand new. 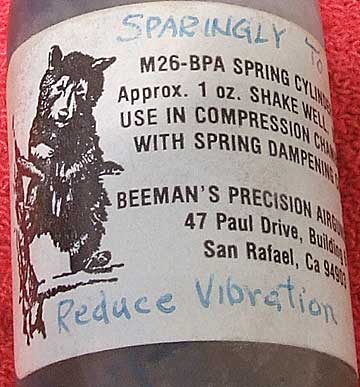 Boswell Bear was on the earliest labels. This one has a San Rafael address.

I contacted Robert Beeman about the San Anselmo address on the gun and the Boswell Bear labels. He told me these were the very first labels his company ever used.

However, there were also some anomalies among the things in the box. When the FWB 124 first came out in about 1972, it had a plastic trigger blade. Oh, how the airgunners of the time complained about that! Why would a top-quality maker like Feinwerkbau put a cheap plastic trigger on any gun they would make? They complained throughout the decade of the ’70s. About 1980, the company finally brought out an aluminum trigger blade. First, the guns came out with it installed, and then several years later it was offered as a replacement part that Beeman sold as a retrofit. 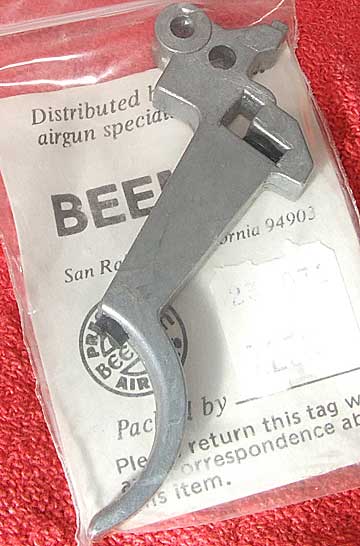 The aluminum trigger blade was made to replace the earlier plastic blade. This one is a retrofit part but was never installed.

So, there was an aluminum trigger blade in the box with this rifle that had to have been added years after the box was built. Obviously, this set was a work in progress. No attempt had been made to update the trigger in the rifle, since the original plastic trigger was (and still is) in the gun. And I know from experience with many other 124s that the plastic trigger will not break in normal use, so why did the owner buy the aluminum blade?

Canopic jars
When Egyptians mummified a body, some of the organs were removed and placed in canopic jars, each with its own separate guardian. There were no jars inside the gun box, but there were separate sections that housed fresh vitals for a renewal of the powerplant. A new replacement mainspring was housed on a rod set into the box lid and no fewer than three fresh piston seals were in a special compartment of the box, where they awaited the day of renewal.

When I was a kid, I played cops ‘n’ robbers a lot. The imaginary gun I used never ran out of bullets. It was becoming clear to me that the original owner of this 124 wanted the same thing from his gun–a spring gun that never failed. He stockpiled the parts that he knew would wear out over time. When they wore out–presumably from use–their replacements were on hand to keep the show rolling. Only–this rifle was never used!

Plugged up
Unlike my cops ‘n’ robbers weapon, a well-used right hand with a two-finger barrel that fired tens of thousands of times, the owner of this 124 never fired a single shot with it. He couldn’t have, for the barrel was completely plugged with grease!

When I went to chronograph the rifle to ascertain the state of tune, I was surprised to find the bore completely obstructed. A patch pushed by a cleaning rod pushed out many inches of petroleum grease, the common kind used for general lubrication. It took some time to clean out all this worthless grease, and I was adamant to do it before the barrel was ruined. What the first owner did not understand was that plain grease is not a good preservative. Over the years, it dries out and hardens. It then allows moisture to enter and collect against the metal and the barrel would have rusted slowly from the inside out.

Cosmoline is a military preservative that’s often used on guns put into long-term storage. It provides a moisture barrier for a period of time, though it, too, has a definite period of useful life beyond which it offers no protection. While it resembles regular grease, it’s not the same thing at all, and grease is not an acceptable substitute fort it. You’re far better off with a clean bore lightly coated with oil, the way the military tells you to store firearms. But the grease in this gun was a big clue about what was happening.

He may have shot the rifle a few times, but the finish on the barrel near the muzzle wears quickly from handling and this one is still like new. So, not many shots (if any) were ever fired. I’ve also shot it a few times, but I don’t take it out that much, either.

The status of the gun
The rifle was like new in unfired condition when I got it. The bore was plugged with grease. The rifle was surrounded with the parts needed to keep it operating for over 20 years of hard use, yet it had seemingly never been used. It looked like the original owner had cherished this rifle without ever actually using it. He entombed it in what he had hoped was a very protective cocoon to guarantee its survival into the future, and yet it was a future that didn’t include him.

I obtained the gun just after the new century began. The first owner had passed away, which is how the man I bought the gun from got it. So, this gun, which was preserved for all time, had now outlived its first owner–it’s creator, if you consider the whole package.

In our next look, I’ll show you other strange things in the box and will chronograph the rifle for you.

Hw 55 Tyrolean – Part 5 How to measure a spring 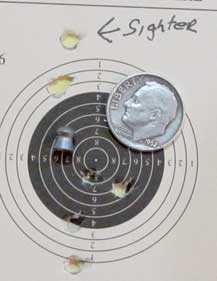