Back in 2000 Umarex unveiled an innovative air pistol design, the Walther CP99 pellet gun. There was nothing new about pellet guns, or Walther airguns, but this airgun had a mission, it was as physically close in detail and basic handling as the 9mm Walther P99 being used by German police departments, as well as state and local law enforcement agencies in the U.S. (or the Smith & Wesson built version, the S&W 99 manufactured from 2000 to 2004).

The CP99 was initially intended to be a training gun for German police as well as a sport shooting pellet gun with the panache of a legitimate Walther pistol. The P99 design was also highly popular having been introduced into the James Bond films in 1997 with Tomorrow Never Dies. The P99 remained the Bond gun right up to the 2006 franchise reboot with Daniel Craig as 007 in Casino Royale, after which Bond went back to packing a PPK in Quantum of Solace, A PPK/S in Skyfall and PPK in Spectre. But the P99 has never lost its popularity, nor has the CP99, which is still being manufactured 16 years after it was introduced.

With a metal slide, polymer frame, and interchangeable backstrap panels, just like the striker-fired cartridge models, and same general measurements, the airgun fits most P99 holsters, though not all, as the triggerguard is just slightly larger making it a tight fit with contoured leather holsters and not usable with Level II and Level III holsters that have a triggerguard locking device. It does, however, fit my original P99 holster. The pellet model also accepts all of the original P99 accessories including the Walther rail mount laser, as well as all current rail mount lights and lasers, again making the CP99 a good choice for learning the handing of accessories as well as the 9mm P99.

One of my favorite features on the airgun is the continued use of the original style “ski jump” in the triggerguard, which was intended as a trigger finger reference point, but deleted from later production models; apparently I was the only person who liked it.

The CP99 also has the same triggerguard mounted ambidextrous magazine releases, which in the case of the airgun releases a full-sized magazine that carries the 12 gram CO2 cartridge. To load the CO2, remove the magazine, rotate the floorplate three-quarters of a turn clockwise (until it stops); I always add a drop of Crosman Pellgun oil on the tip of the CO2 cartridge before inserting it, then turn up the base screw until tight (but don’t over tighten) and rotate the floorplate back around at which point you will hear the CO2 cartridge being pierced. Insert the magazine back into the grip frame and you are ready to load and shoot. For reload and tactical reload training, you can have two extra CO2 magazines loaded and interchange them at will, as removing the magazine from the gun and reinserting it will not deplete the CO2.

The pellets load into an 8-round cast alloy rotary magazine inserted at the breech by depressing the slide release, which sends the front half of the barrel forward to allow inserting the rotary magazine. When loading, the gun should be set to safe (a slide lever on the right side of the frame, which is not a feature found on the cartridge-firing models). After loading the rotary magazine, simply grasp the sides of the barrel and push it closed. Take the gun off safe, pull the slide back to cock the action (just like chambering the first round in the P99 to fire single action), and you are ready to shoot. 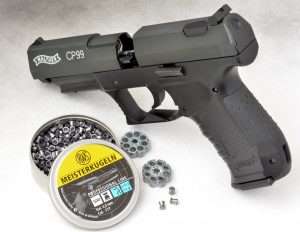 Suppose you decide not to shoot? You can use the de-cocker on the top left of the slide, just forward of the rear sight, exactly the same as you would decock a P99. You can also fire the gun double action for the first round. So this entire procedure is identical to the cartridge-firing models, one very good reason why the CP99 was used as a training gun.

How does the airgun stack up against the 9mm for size and weight? The 9mm P99 has an overall length of 7.1 inches, height of 5.3 inches, width of 1.3 inches, and carry weight of 25 ounces (with empty magazine). The CP99 has the same measurements and weighs slightly more at 26.5 ounces (with the empty CO2 magazine). The trigger shapes are nearly identical, with the airgun having a narrower trigger shoe. The DA trigger pull on the 9mm P99 averaged 10 lbs. 3 oz. and SA 6 lbs. 14 oz. The CP99 averaged 7 lbs. 10 oz., DA, and 5 lbs. 2.5 oz. SA. The front and rear sight designs are also the same; however, the CP99 does not have the white dot sights like the P99. It also does not have the striker status indicator at the back of the slide which indicates if the action is cocked.

The CP99’s rifled steel barrel is 3.25 inches in length vs. the P99’s barrel length of 4-inches. But remember, there is zero recoil and a rifled barrel pellet gun is far more accurate than a BB gun’s smoothbore barrel, so at 10 meters the CP99 is a target grade air pistol (though not what one could call a “precision” target air pistol). At 10 meters my best 8-shot group with Meisterkugeln measured 1.25 inches inside the X. With the lighter weight and higher velocity Sig Sauer Match Grade Ballistic Alloy pellets 8-shot groups averaged 0.74 inches in the 10 ring at 9 o’clock with six of the eight pellets making one ragged hole in the target. Average groups overall with both brands were all inside 1.5 inches just above POA. For accuracy I also cocked the action for each round to fire the CP99 single action.

A second test was conducted today firing DAO from 21 feet with the Sig Sauer alloy pellets. Trigger takeup on double action is long but the break is crisp and accuracy really doesn’t suffer. A best 8-rounds at 21 feet clustered into 1.1 inches with five of eight again making one ragged hole in the target.

The CP99 was one of my first multi-shot pellet guns and remains a personal favorite. I have three; the all black gun shown, a stainless slide bi-tone, and an OD green version. Almost everything you do with the airgun is identical to handling the 9mm model Walther. Even sport and target shooting is a training exercise for using the 9mm.While I rarely shoot my 9mm model theses days (purchased in 2001 when I bought my first CP99), I still get the airguns out every so often to keep up my proficiency with handling the 9mm model, and to enjoy shooting one of the best Walther pellet guns around, even after 16 years.